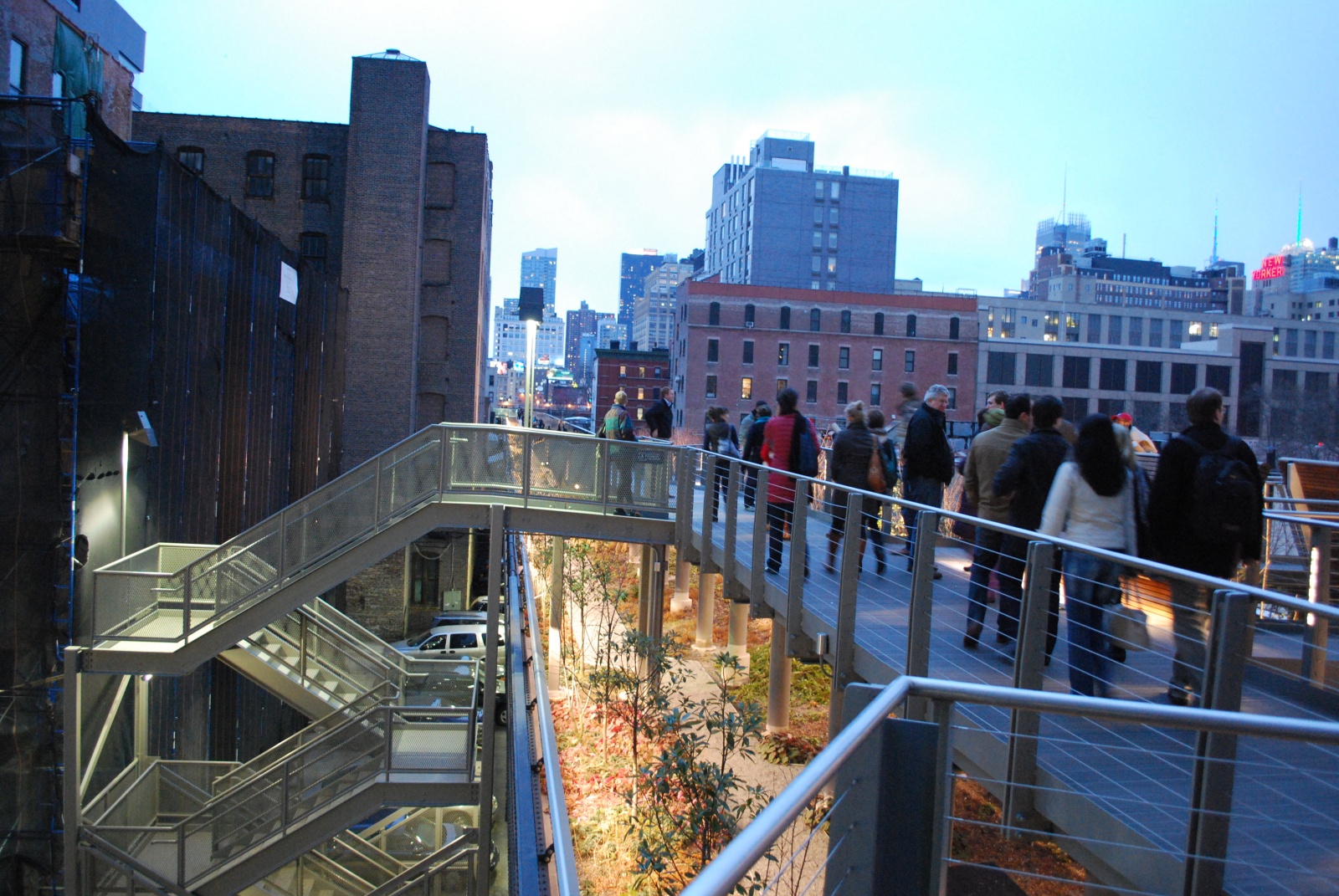 Friends of the High Line works in partnership with the City of New York to preserve and maintain the structure as an elevated public park. Visit the official High Line website; and specifically their About and Sustainable Practices pages.

The High Line was designed by the landscape architecture firm of James Corner Field Operations (whose mantra throughout the design process was ‘Keep it Simple, Keep it Wild, Keep it Slow, and Keep it Quiet) and architects Diller Scofidio + Renfro with planting design from Piet Oudolf and engineering design by Buro Happold. Created in three phases over a period of eight years, each section of the High Line measures about .5 miles: Construction started in 2006 and Phase 1 covering 9 blocks opened in 2009; Phase 2 covering 10 blocks opened in 2011; and Phase 3 started in 2012 and was opened to the public in 2014. Although the High Line is one continuous project, the profiles here are presented as a series of three since they were constructed over different time periods with distinct features. See the profiles for Phase 1 and Phase 3 in The Greenroofs.com Projects Database.

Located in New York City’s Meatpacking District, the High Line was an elevated railway originally constructed in the 1930s to lift dangerous freight trains off Manhattan’s expanding streets; abandoned in 1980, it was left to naturalize and fell into disuse. The non-profit group “Friends of the High Line” was founded by Joshua David and Robert Hammond in 1999 to advocate for its preservation and reuse as a public park. In 2002, Friends of the High Line finally won a lawsuit challenging the City’s plans for demolishing the remaining tracks. In 2003 a design competition was launched to solicit proposals for reusing the High Line.

Today the High Line is an elevated public park owned by the City of New York and operated under the jurisdiction of the New York City Department of Parks & Recreation. The first section opened to the public in June, 2009. The second phase extended the High Line from 20th Street to 30th Street, opening in June, 2011. Phase 2 added public access points at 23rd, 28th, and 30th Streets, as well as ADA-accessible elevators at both 23rd Street and 30th Street.

Distinct features found in the High Line, Phase 2 are the Chelsea Thicket; Wildflower Field; 23rd Street Lawn; Philip A. and Lisa Maria Falcone Flyover; and the 26th Street Viewing Spur. See a map and these Park features in detail at Friends of the High Line.

Section 2 is: “narrower and straighter, bounded on both sides by an eclectic mix of historic warehouses, residential buildings and new development. The scale is much more intimate, intense, even voyeuristic, creating a feeling of being more removed from the big city and more immersed in the neighborhood,” (ASLA, 2013).

“The second phase route runs parallel to Tenth Avenue, one of the principal north-south traffic arteries. The corridor is less variable in width and often narrower than in the first phase. The second phase route is also farther from the Hudson River, which forms a dramatic backdrop to some of the first phase design. About one third of the second phase is elevated about 8 feet (2.5 meters) above the planting beds below, so that pedestrians walk on a metal structure called the Philip A. and Lisa Maria Falcone Flyover. Its alignment is gracefully off center, resulting in planting beds on the east side that are about three times wider than those on the west.

Except for some tree species, such as magnolias, amelanchier and sassafras still becoming established, visitors look down on the vegetation rather than see it at eye level. As the vegetation has grown, the effect is of walking through the upper story of a young forest, and descending back to the “forest floor” as either end of the skyway meets the existing elevation of the trestle.” Cantor, Greenroofs.com 2013

“With the help of ZinCo USA green roof technology, the High Line now invites the public to stroll above 10th Avenue on its 1-mile-and-a-half boardwalk among natural plantings, benches, lighting and a host of special features. The ZinCo USA drainage system enabled the High Line’s diverse array of design and construction experts to seamlessly integrate plantings with hardscapes. The components of the ZinCo USA system allow stormwater and irrigation runoff to drain properly while simultaneously retaining water to keep the vegetation vital and healthy. We feel the project epitomizes how green roof technology can transform urban space into beautiful recreational parks and gardens.” ZinCo USA, 2011