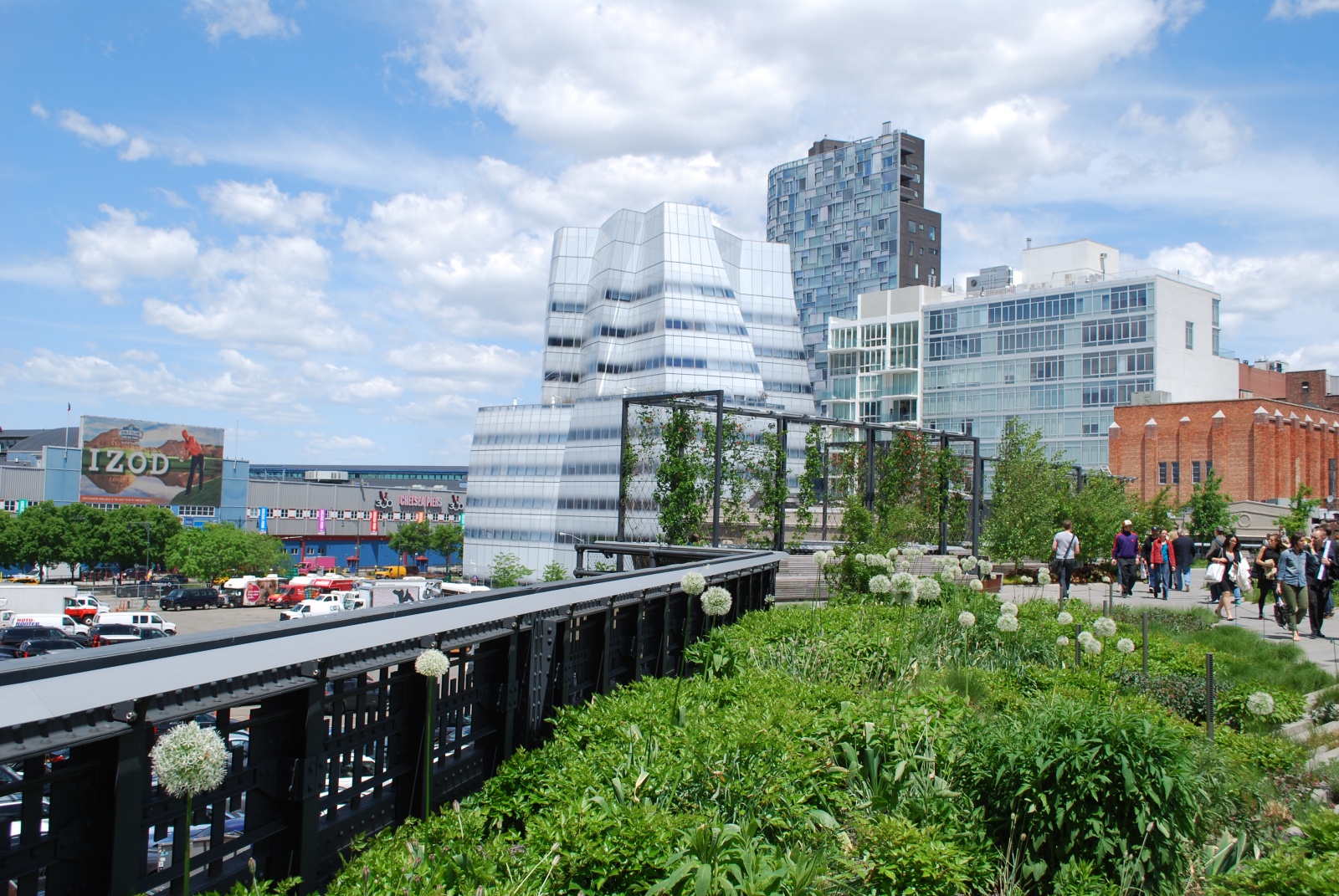 Friends of the High Line works in partnership with the City of New York to preserve and maintain the structure as an elevated public park. Visit the official High Line website and specifically their About and Sustainable Practices pages.

The High Line was designed by the landscape architecture firm of James Corner Field Operations (whose mantra throughout the design process was ‘Keep it Simple, Keep it Wild, Keep it Slow, and Keep it Quiet) and architects Diller Scofidio + Renfro with planting design from Piet Oudolf and engineering design by Buro Happold. Created in three phases over a period of eight years, each section of the High Line measures about .5 miles: Construction started in 2006 and Phase 1 covering 9 blocks opened in 2009; Phase 2 covering 10 blocks started in 2009 and opened in 2011; and Phase 3 started in 2012 and was opened to the public in 2014. Although the High Line is one continuous project, the profiles here are presented as a series of three since they were constructed over different time periods with distinct features. See the profiles for Phase 2 and Phase 3 in The Greenroofs.com Projects Database.

Located in New York City’s Meatpacking District, High Line was an high elevated railway originally constructed in the 1930s to lift dangerous freight trains off Manhattan’s expanding streets; abandoned in 1980, it was left to naturalize and fell into disuse. The non-profit group “Friends of the High Line” was founded by Joshua David and Robert Hammond in 1999 to advocate for its preservation and reuse as a public park. In 2002, Friends of the High Line finally won a lawsuit challenging the City’s plans for demolishing the remaining tracks. In 2003 a design competition was launched to solicit proposals for reusing the High Line.

Today the High Line is an elevated public park owned by the City of New York and operated under the jurisdiction of the New York City Department of Parks & Recreation. The first phase of the High Line from Gansevoort to 20th Street opened to the public in June, 2009. Phase 1 encompasses 2.88 acres, transforming 2,640 linear feet of infrastructure into parkland. The first section is accessible to the public at several locations along 10th Avenue: Gansevoort Street, 14th, 16th, 18th and 20th Street, with ADA accessibility through elevators at 14th Street and 16th Street.

“As an ambitious urban reclamation project, the High Line’s very essence is born out of the desire to preserve and recycle. Section 1 transforms 2,640 linear feet of infrastructure into parkland, reducing the heat island effect and providing habitat for animals, insects and birds. All lead paint was stripped from the structure and all hazardous materials removed from the site. Two hundred and ten species of perennials, grasses, shrubs and trees were carefully selected to produce a primarily native, resilient, and low-maintenance landscape, building upon the existing self-sown landscape and working with specific environmental conditions and microclimates.

A dominant grassland matrix provides consistency, with punctuated and theatrical blooms of perennials, trees and shrubs for diversity, seasonal interest, texture, fragrance, and height and color variation. Green roof systems and technologies enhance water retention, drainage and aeration and minimize irrigation requirements. This in combination with open joint pavement ensure that over 80 percent of the water that falls on the High Line stays on the High Line. Energy-efficient LED lighting is installed below eye level illuminating the pathways for safety, while allowing the eye to appreciate the city beyond and the nighttime sky.”  ASLA, 2010

Referring to Phase 1, “The park welcomes visitors with naturalized plantings that are inspired by the self-seeded landscape that grew on the disused tracks and with new, often unexpected views of the city and the Hudson River. Pebble-dash concrete walkways unify the trail, which swells and constricts, swinging from side to side, and divides into concrete tines that meld the hardscape with the planting embedded in railroad gravel mulch. Stretches of track and ties recall the High Line’s former use. Most of the planting is of rugged meadow plants, including clump-forming grasses, liatris and coneflowers, with scattered stands of sumac and smokebush, but not limited to American natives.” ~ Wikipedia, 2010.

“The most dynamic section of the first phase of the High Line slices through the Chelsea neighborhood at an angle, purposely bringing visitors to the edge of the trestle platform, which varies considerably in width (30 to 88 feet), and engages them with the diverse architecture of a mixed use neighborhood by using an integrated vocabulary of complex elements.

“One moves through a sequence of difference spaces, each varying in style, character, and the nature of the plantings. The walks are a system of concrete planks with open joints interlocking like the tines of a fork with the former railroad tracks, which were disassembled and then rebuilt within the park. Horticultural displays of spectacular perennials, shrubs and trees dominate. A diverse palette is used, primarily of native trees, shrubs, grasses and perennials, with a range of textures and colors, and adaptable to a harsh, exposed environment.” Cantor, Greenroofs.com 2013

Phase 1 of the High Line had won many awards including the 2010 International EGHN Award from the European Garden Heritage Network and the 2010 Honor Award for General Design for The High Line, Section 1 from the ASLA. Also in 2010, Friends of the High Line received the International Green Roof Association (IGRA) Green Roof Leadership Award 2010, presented to Dr. John H. Alschuler, Jr., and Robert Hammond and Joshua David, founders of Friends of the High Line, were awarded the “Jane Jacobs Medal” by the Rockefeller Foundation; the organization itself was given the “Doris C. Freedman Award.”