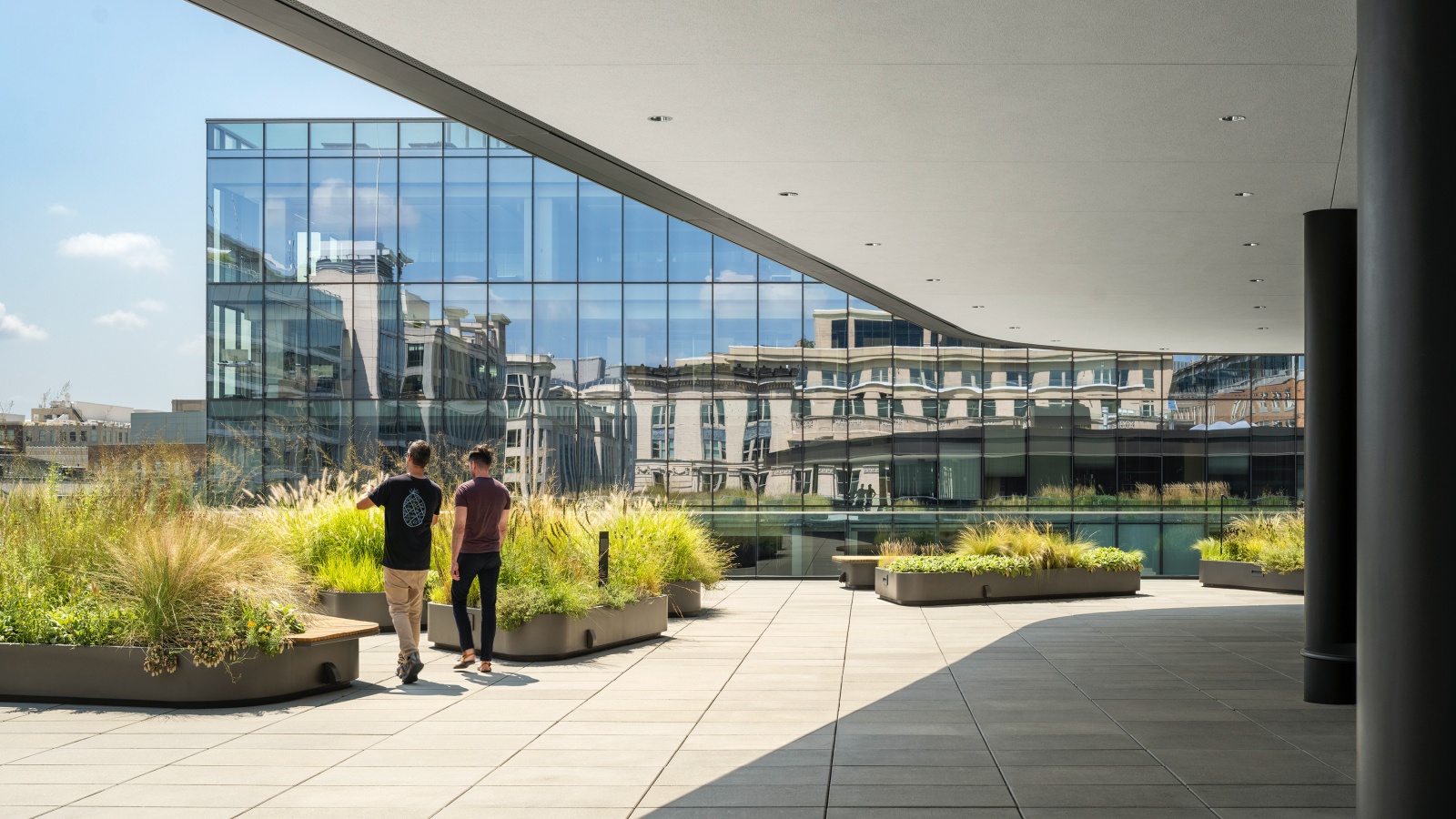 Black History Month was first proposed by Black educators and the Black United Students at Kent State University (U.S.) in February 1969. President Gerald Ford recognized Black History Month in 1976, during the celebration of the U.S. Bicentennial. 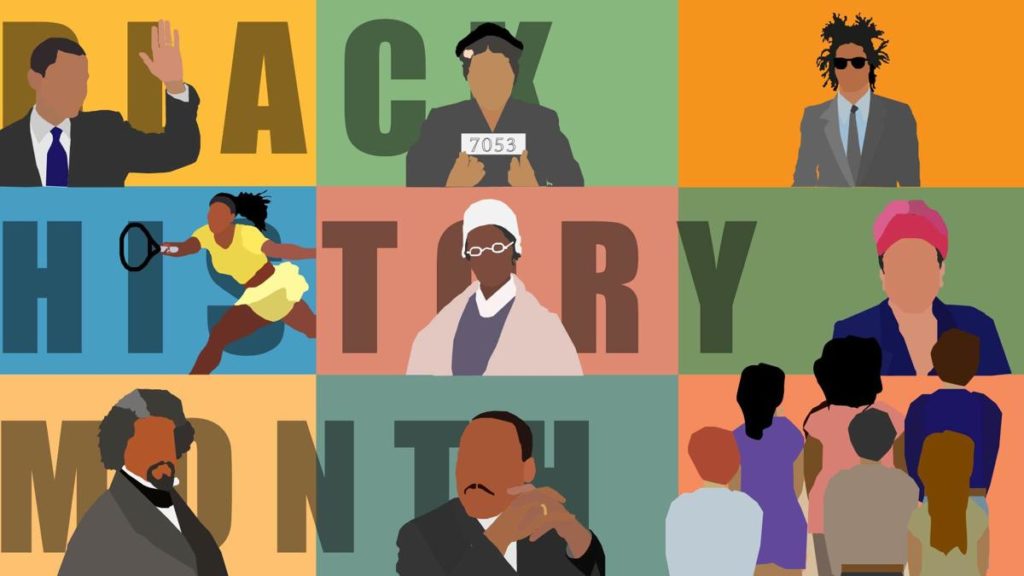 Led by principal Francine Houben, Dutch architects Mecanoo meticulously studied and researched not only the vision and purpose of MLKL’s original design by Ludwig Mies van der Rohe (his last design), but also the philosophy of the great Martin Luther King, Jr. and his ideals for a fair and equitable society.

If you haven’t seen it yet, don’t miss the documentary A Legacy of Mies and King – Renovating the Public Library of Washington D.C. by Mecanoo to fully appreciate their approach to MLKL’s sensitive refurbishment. The Martin Luther King Jr. Memorial Library is a wonderfully executed public building worthy of our nation’s capital – great job to Meccano, OTJ Architects and so many others who were involved at many levels! 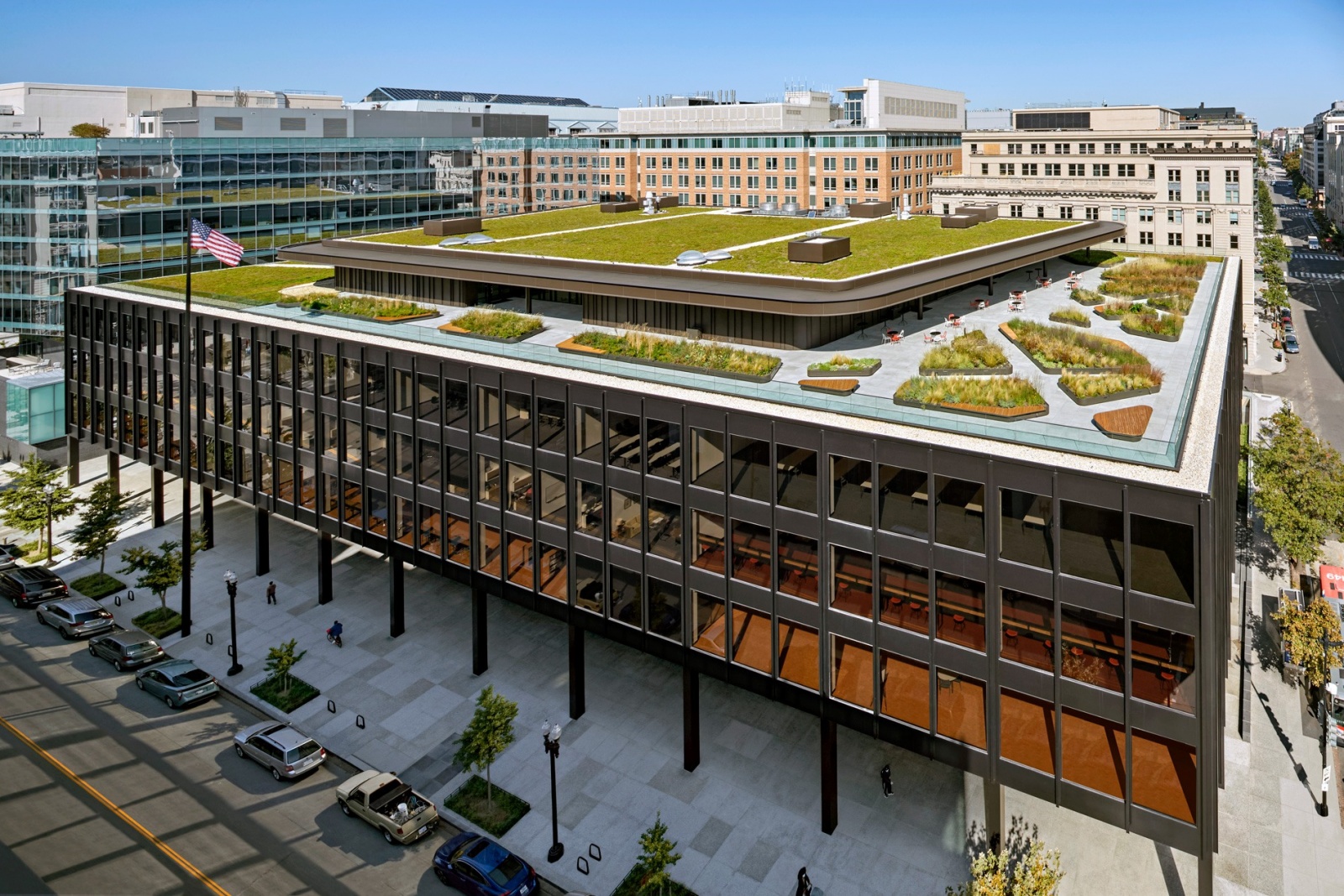 Designed by one of the twentieth century’s greatest architects, Ludwig Mies van der Rohe, the Martin Luther King Jr. Memorial Library (MLKL) was named after the towering civil rights leader who was assassinated in 1968. Washington D.C.’s Central Library, the MLKL was opened in 1972 at a cost of $18 million.

Forty years of deferred facility maintenance prompted its renovation and the $211 million rehabilitation of the landmark structure was performed by Mecanoo with OTJ Architects. OvS developed the project’s landscape. 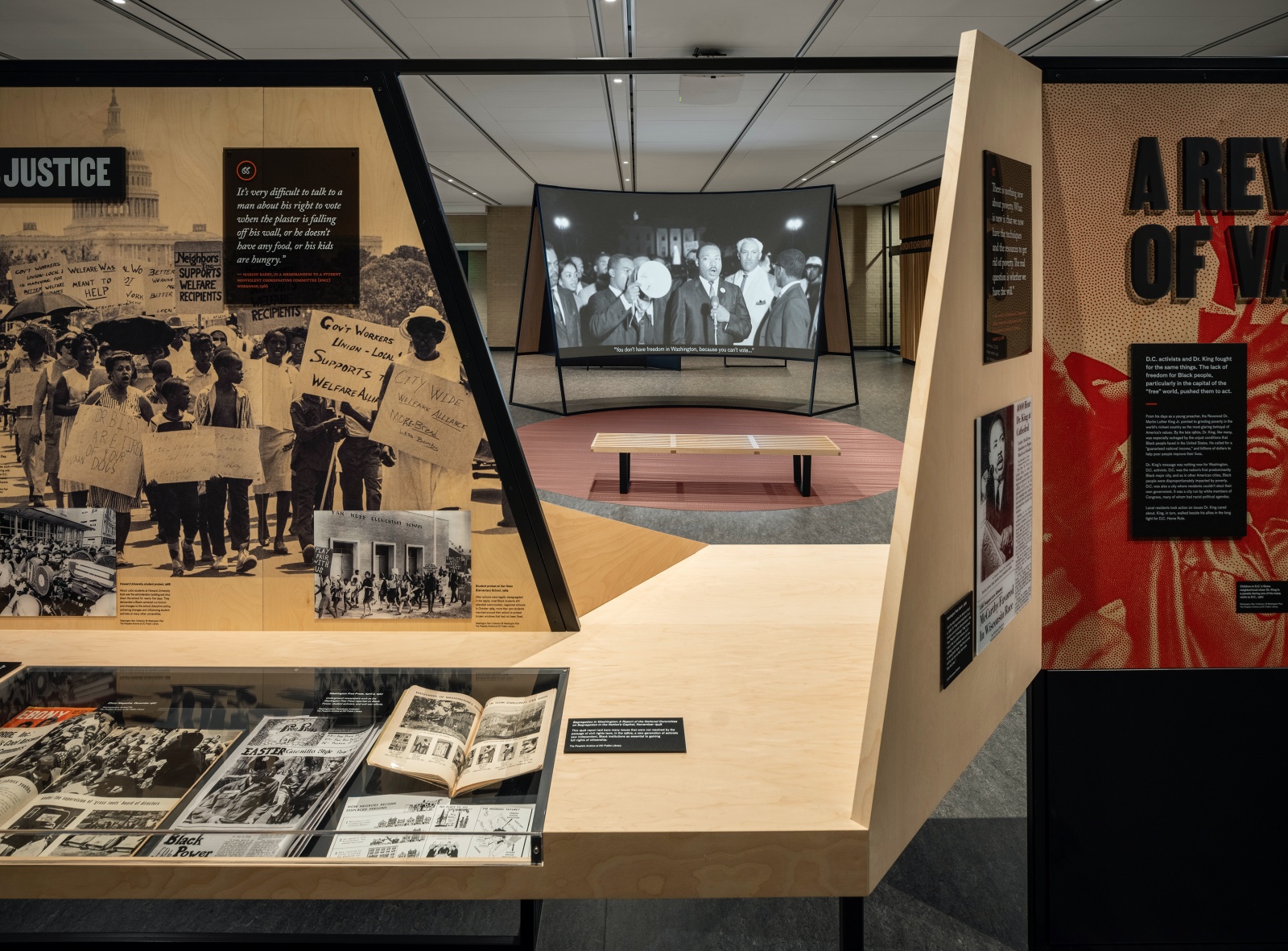 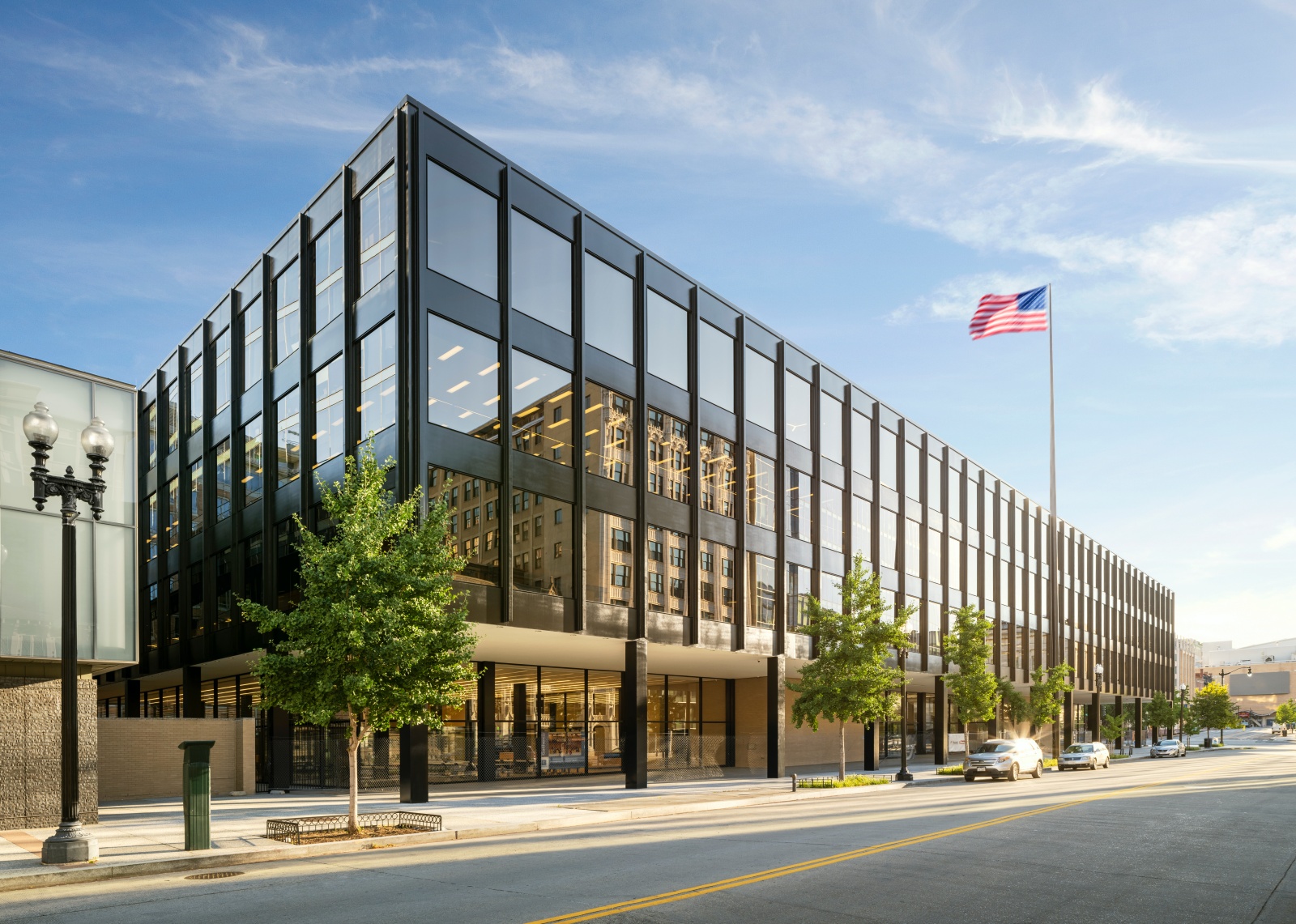 Following the three-and-a-half-year transformation, the MLKL opened to the public in September 2021. The introduction of organic surfaces and softer lines is a strong contrast to Mies’ strict hard-surfaced rectilinearity, but it creates synergy, not opposition, with the original building. 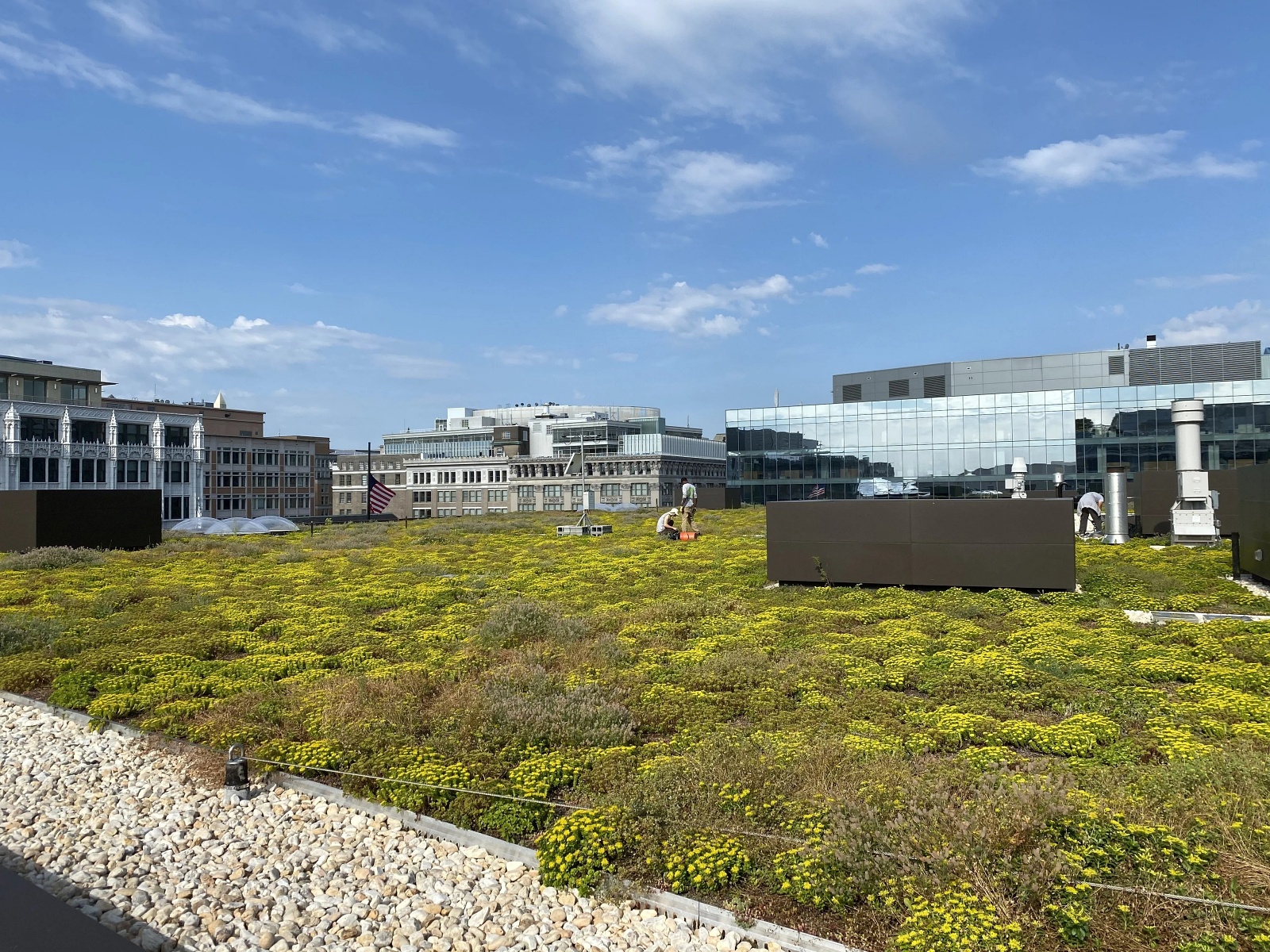 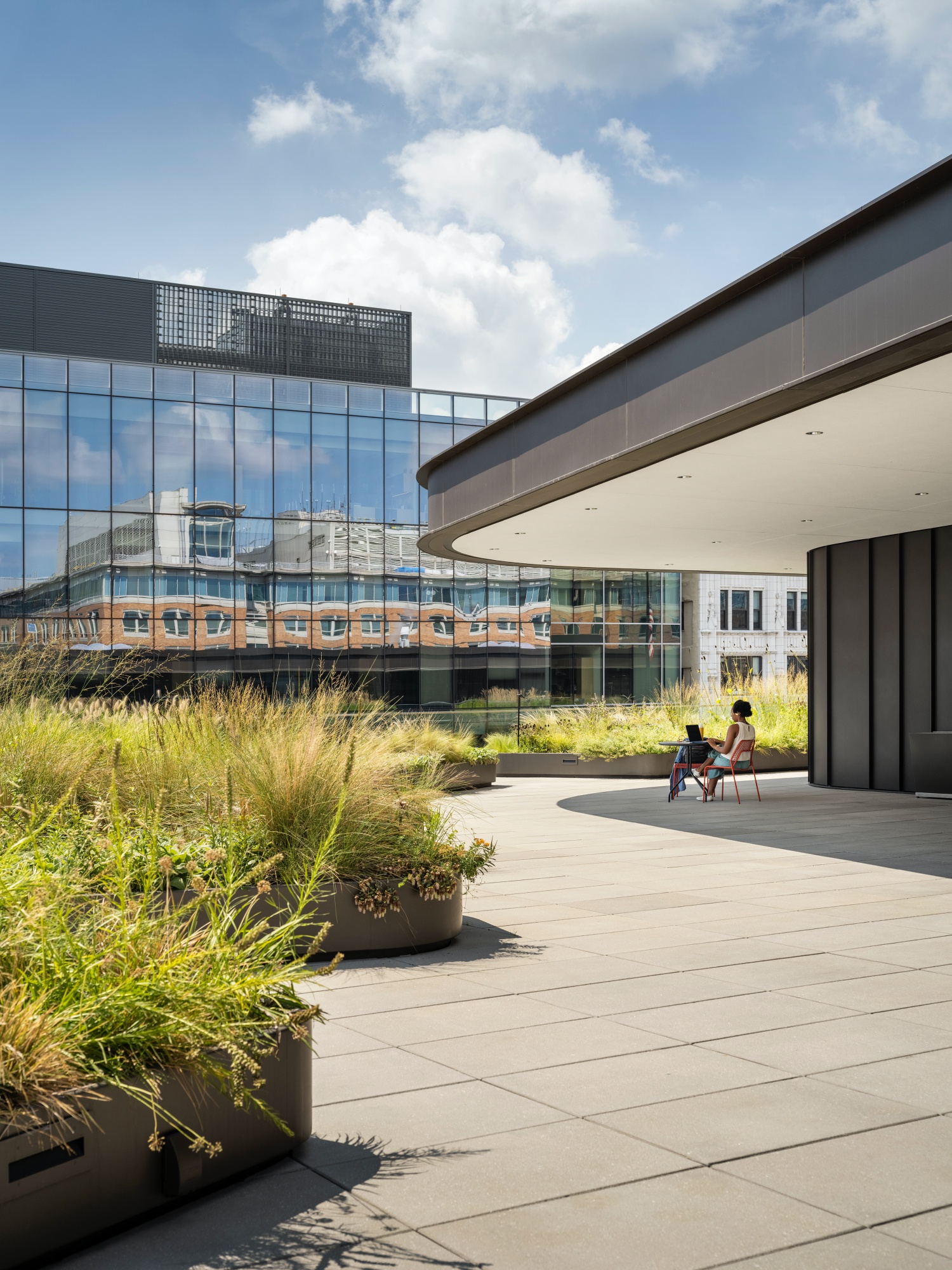 The curvature of the new rooftop pavilion was informed by required setbacks that make it practically invisible from street level. Four existing lower floors are connected to the fifth floor addition and rooftop garden via bold, sculptural staircases. The new floor is contained within a trapezoid, glazed pavilion, sheltered by a roof cantilevering out around it. Set back from the edges, the pavilion is not visible from the street, from where the building’s profile and geometry look exactly as Mies designed it.

The MLKL features the EcoCline® 2+2 green roof system by Furbish on the upper roof planted with a mix of sedums, and custom made metal planters on the terrace below. The metal planters have fixed wooden benches along the sides and are planted with a wide variety of native perennials and shrubs. Combined with Barrett Roofs’ waterproofing, a single source warrantied system was provided. 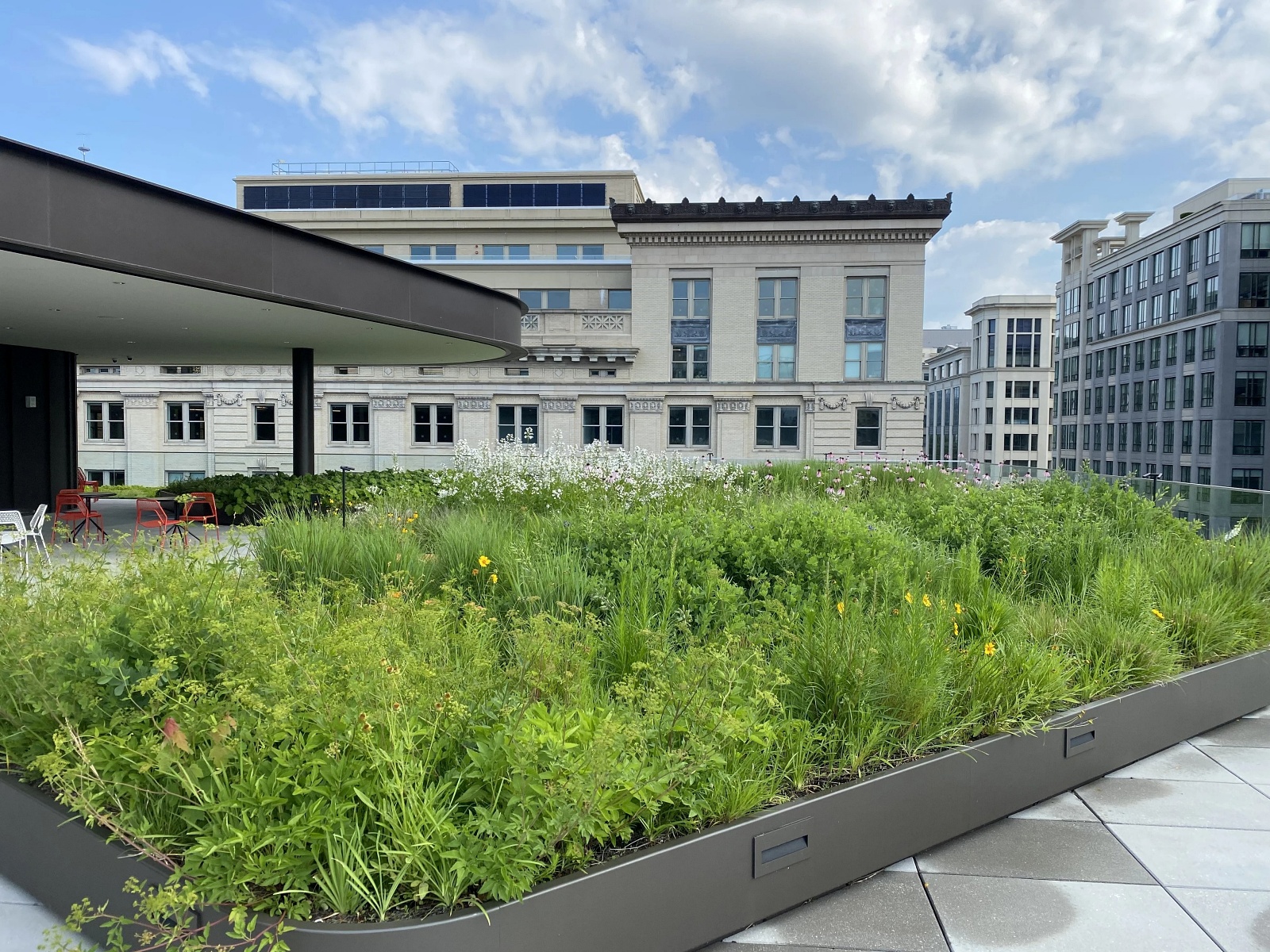 Paths crisscrossed between angular planters bring biodiversity into the heart of Washington, D.C. This hidden yet public oasis offers everyone tranquility, proximity to nature and an open sky.

“The rooftop was a desert,” comments Francine Houben, principal, founding partner and creative director of Mecanoo. “Now it becomes a park for the city.” 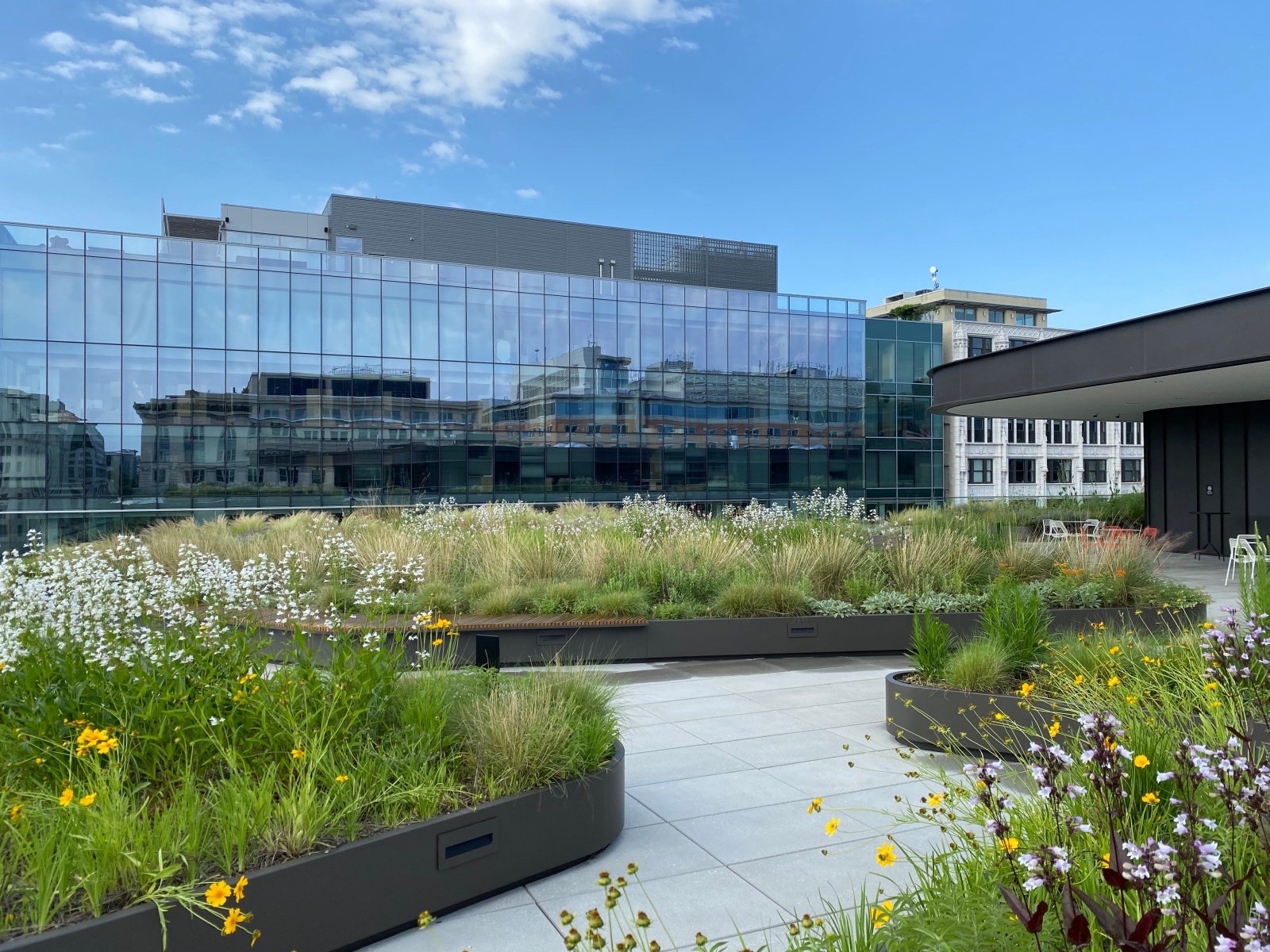 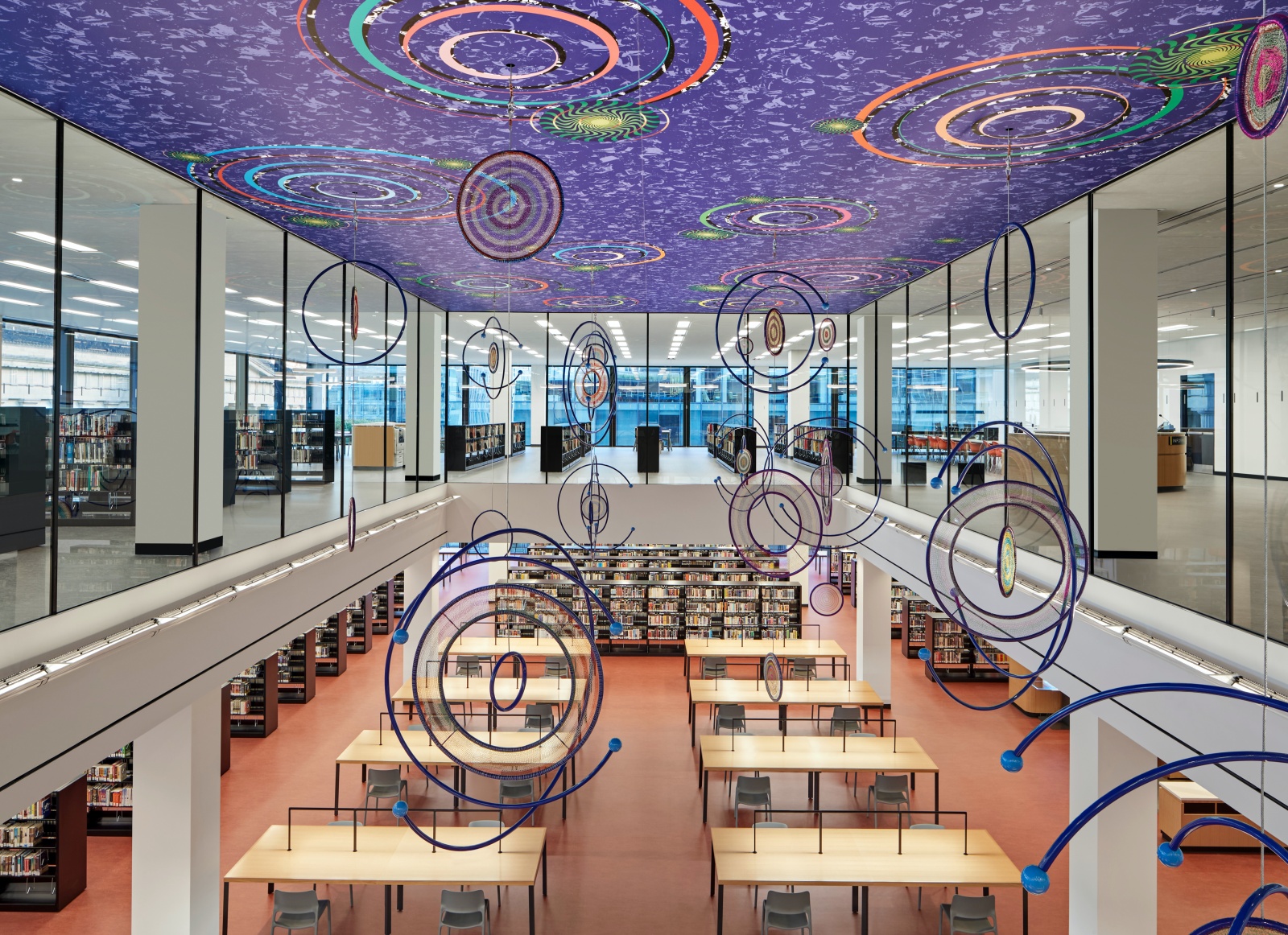 A new installation by Xenobia Bailey hangs from the new two-story ceiling, an artist known for her strong traditional African and contemporary urban aesthetics. Image: Robert Benson, courtesy of Mecanoo 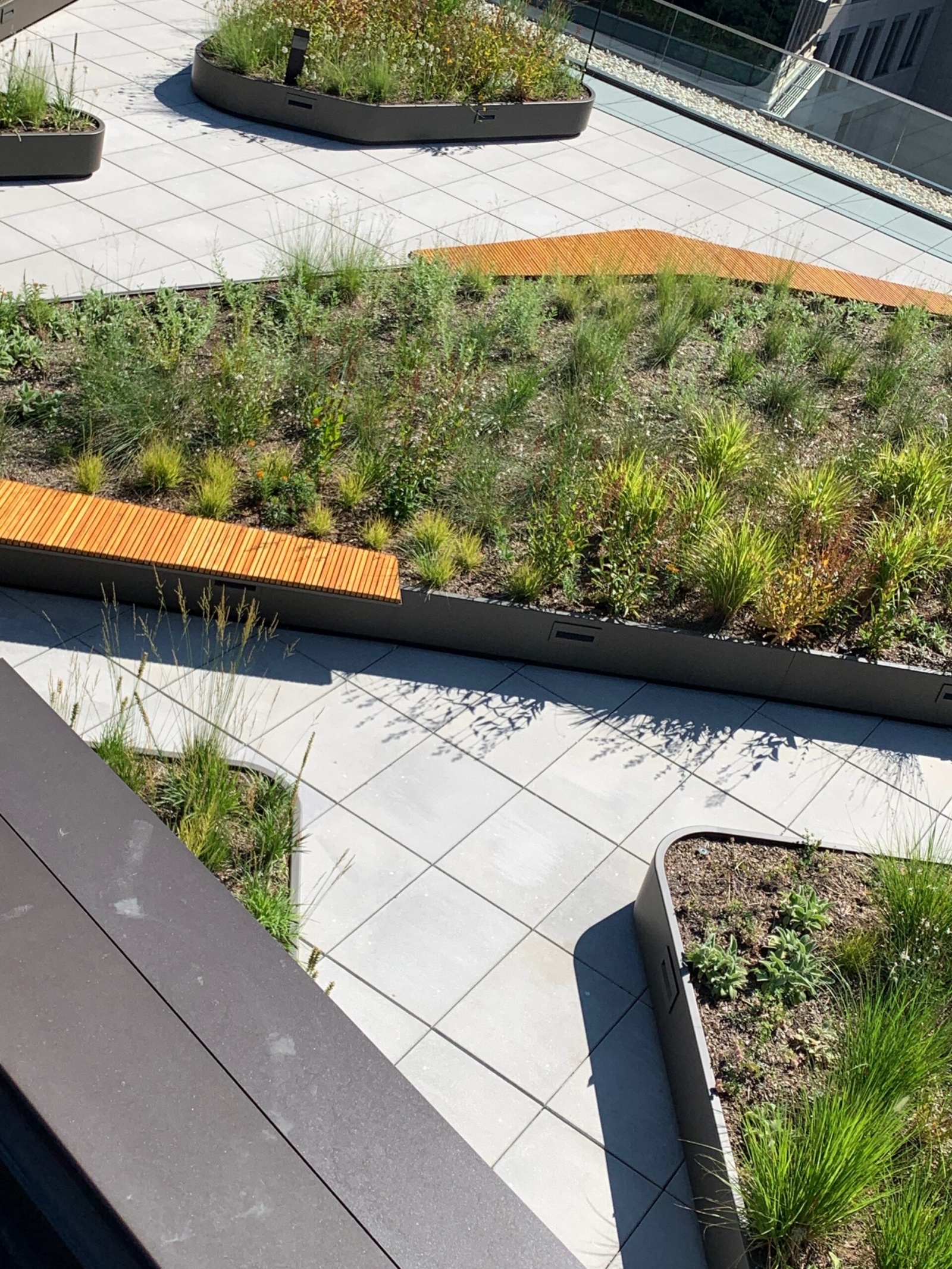 See the Martin Luther King Jr. Memorial Library to view ALL of the Photos and Additional Information about this particular project in the Greenroofs.com Projects Database.