We know U.S. citizens have the right to assemble and march.

“Congress shall make no law respecting an establishment of religion, or prohibiting the free exercise thereof; or abridging the freedom of speech, or of the press; or the right of the people peaceably to assemble, and to petition the Government for a redress of grievances.” ~ First Amendment to the United States Constitution

The hand-written copy of the proposed Bill of Rights, 1789, cropped to show just the text that would later be ratified as the First Amendment. Image: 1st United States Congress / Public domain

We stand in solidarity with our colleagues and neighbors who are peacefully protesting, a Constitution of the United States of America-granted right, across our nation against police violence and racial discrimination. Peaceful protests are one of the cornerstones of our democracy; in fact, speaking out against injustice is not just a privilege but our responsibility – a check and balance against questionable political/ governmental power gone awry.

On a personal note, because of the current situation and to better understand the history of our nation’s disgraceful racism and slavery practices and the people oppressed, Aramis suggested we watch/re-watch three timely movies this past weekend: 12 Years a Slave; Harriet; and Selma. Eye openers.

Because, as Dr. Martin Luther King Jr. said – “Injustice anywhere is a threat to justice everywhere.”

As thousands of Americans are exercising our right to air our grievances, we are pleased to once again showcase the National Museum of African American History and Culture as our Featured Project (originally featured on February 13, 2017 in observance of Black [African American] History Month).

“It is a museum for all of us, not just African-Americans. There is a lot to be learned about ourselves as Americans.” ~ National Museum of African American History and Culture Phil Freelon, the project’s lead architect 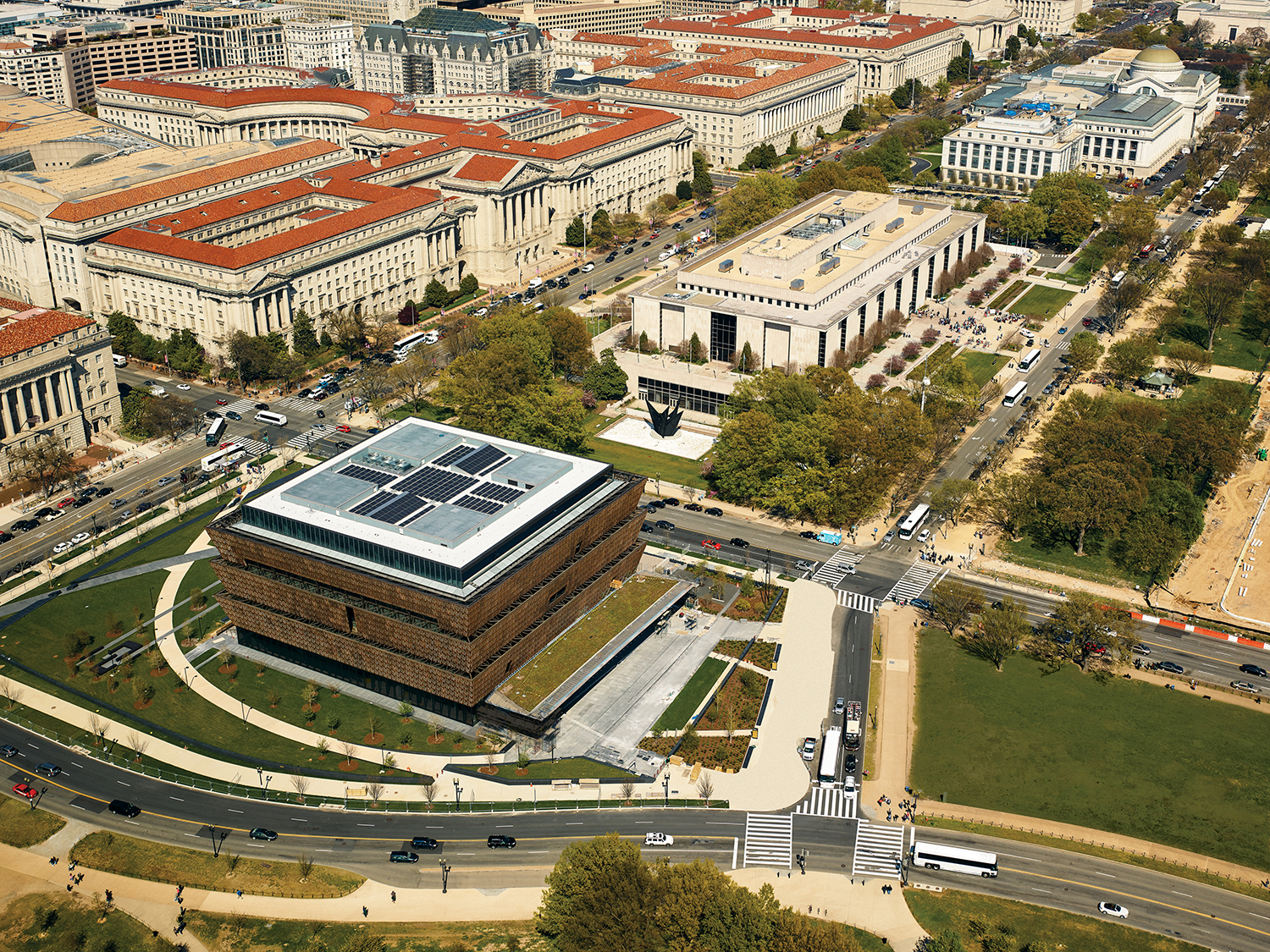 Championed by deceased Republican U.S. Senator Sam Brownback and Democrat Georgia Representative and civil rights campaigner John Lewis, it opened on September 24, 2016. President Obama dedicated the museum and Representative Lewis called it a place that celebrated “the dignity of the dispossessed.” 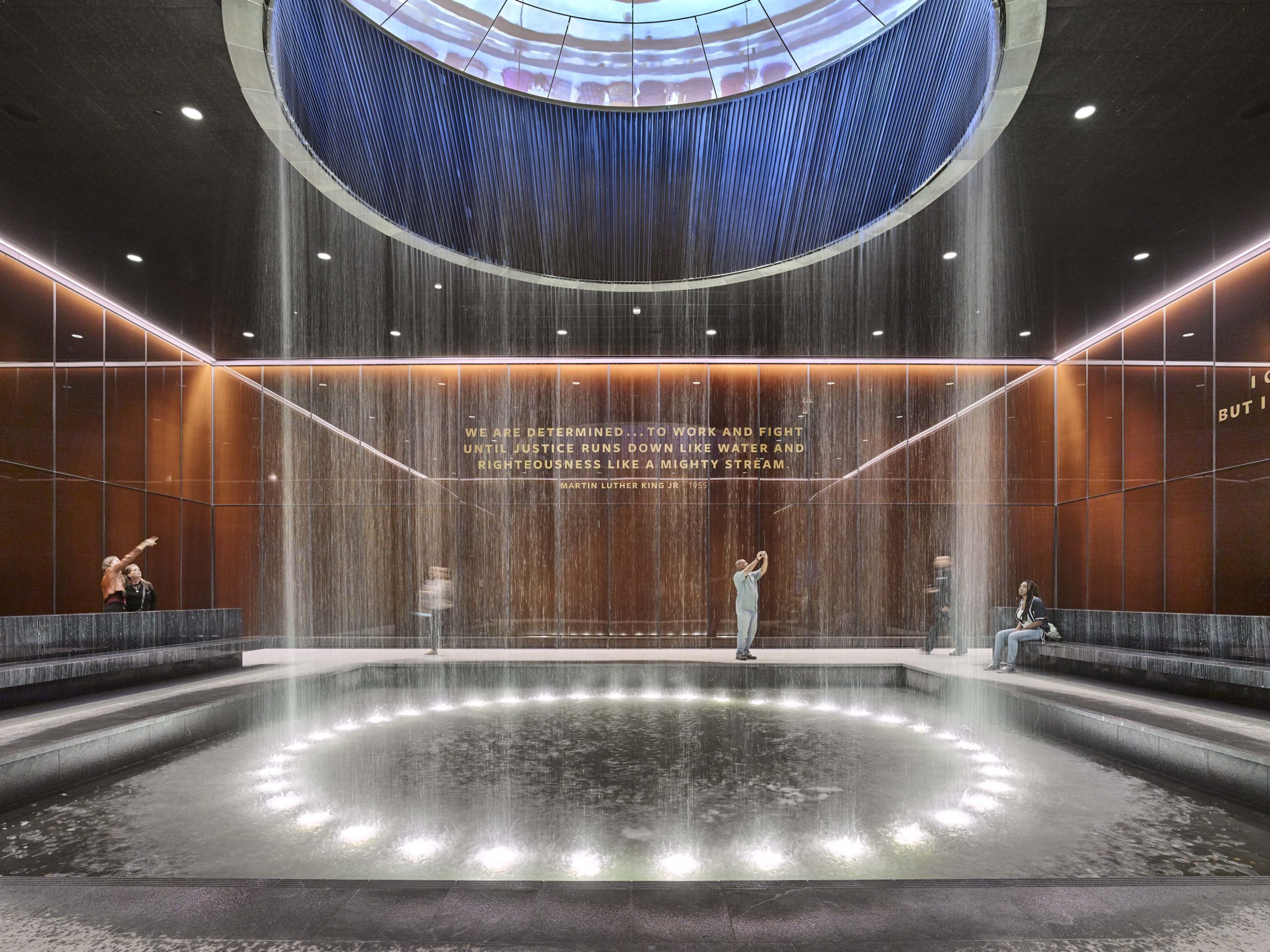 The oculus as seen from the interior. Photo credit: Alan Karchmer/NMAAHC 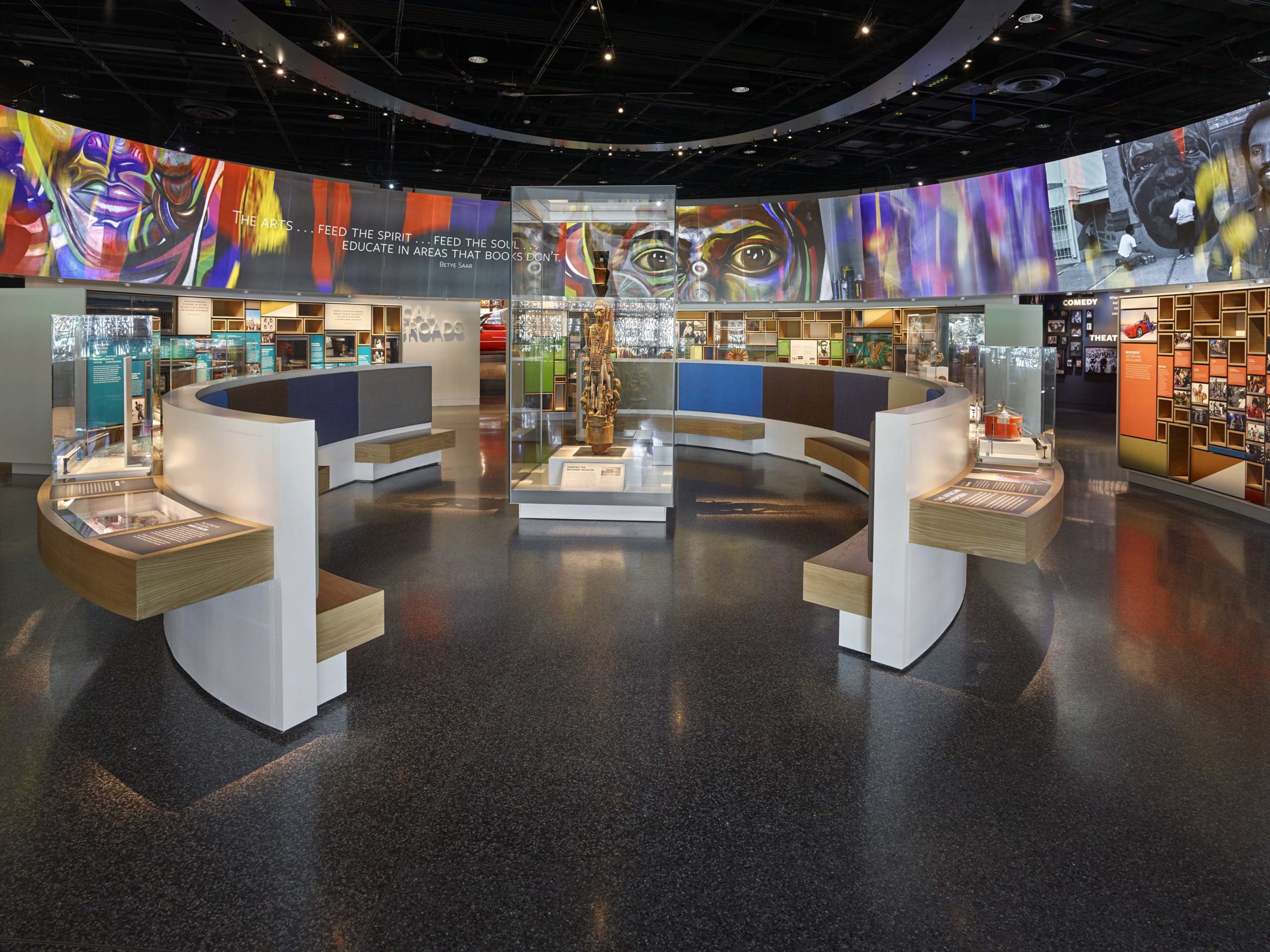 Designed by Freelon Adjaye Bond/SmithGroup, the 420,000 square foot building has a three-tiered shape and is inspired by the Yoruban Caryatid, a traditional wooden column which features a crown or corona at its top. Reaching toward the sky, the bronze-colored filigree corona expresses faith, hope and resiliency. 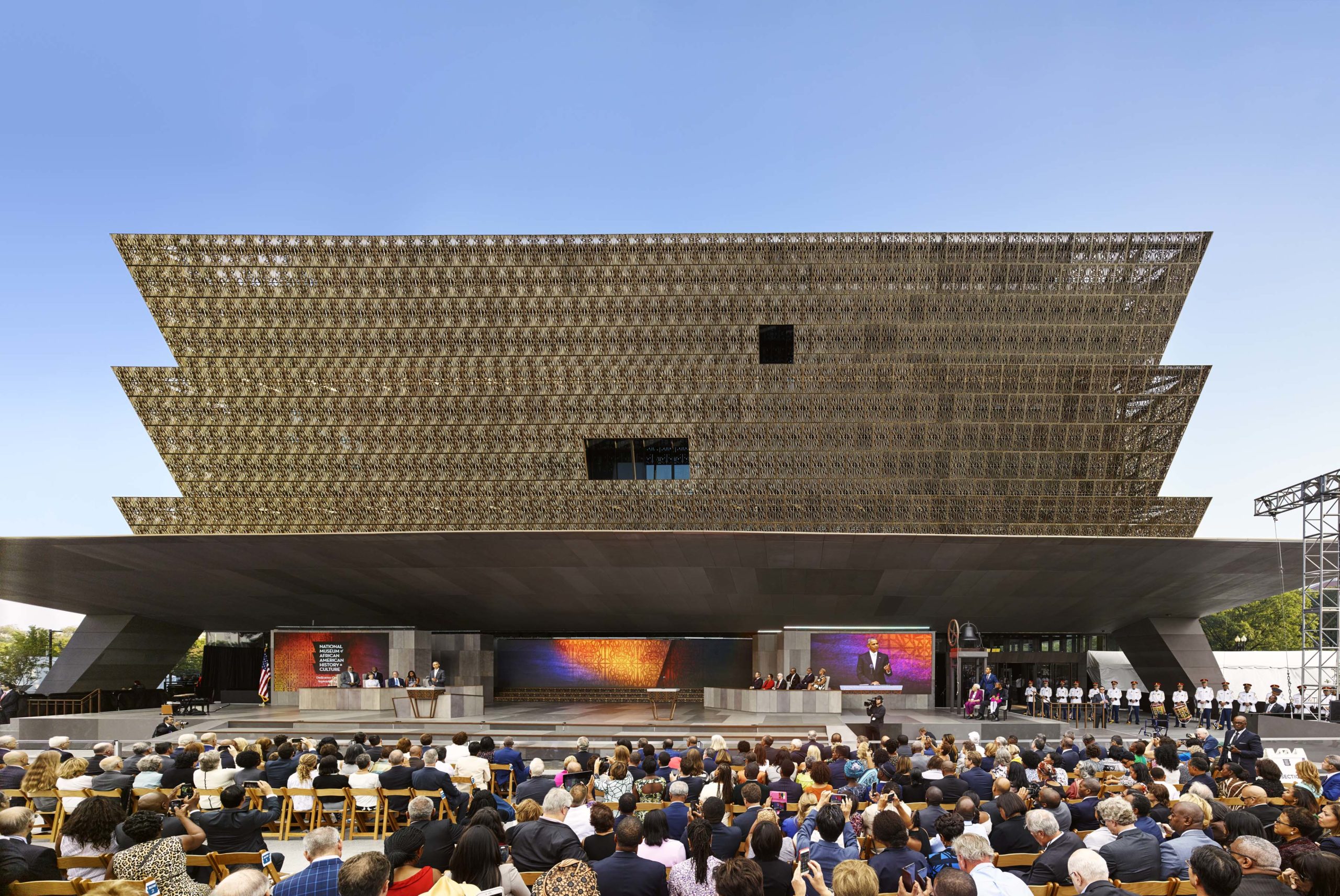 Below, visitors enter through a grand “porch” at the south side. The Porch is an outdoor welcome area and the 175-foot-long steel and concrete canopy shades visitors with its upward tilt. An extensive greenroof planted with pre-vegetated sedum mats from Moerings USA/Sempergreen covers the porch’s overhang.

Henry Company provided the greenroof waterproofing system. Much of the north lawn is a large intensive greenroof which covers the galleries below and the glass oculus that juts up from the grounds to help illuminate the underground portions. 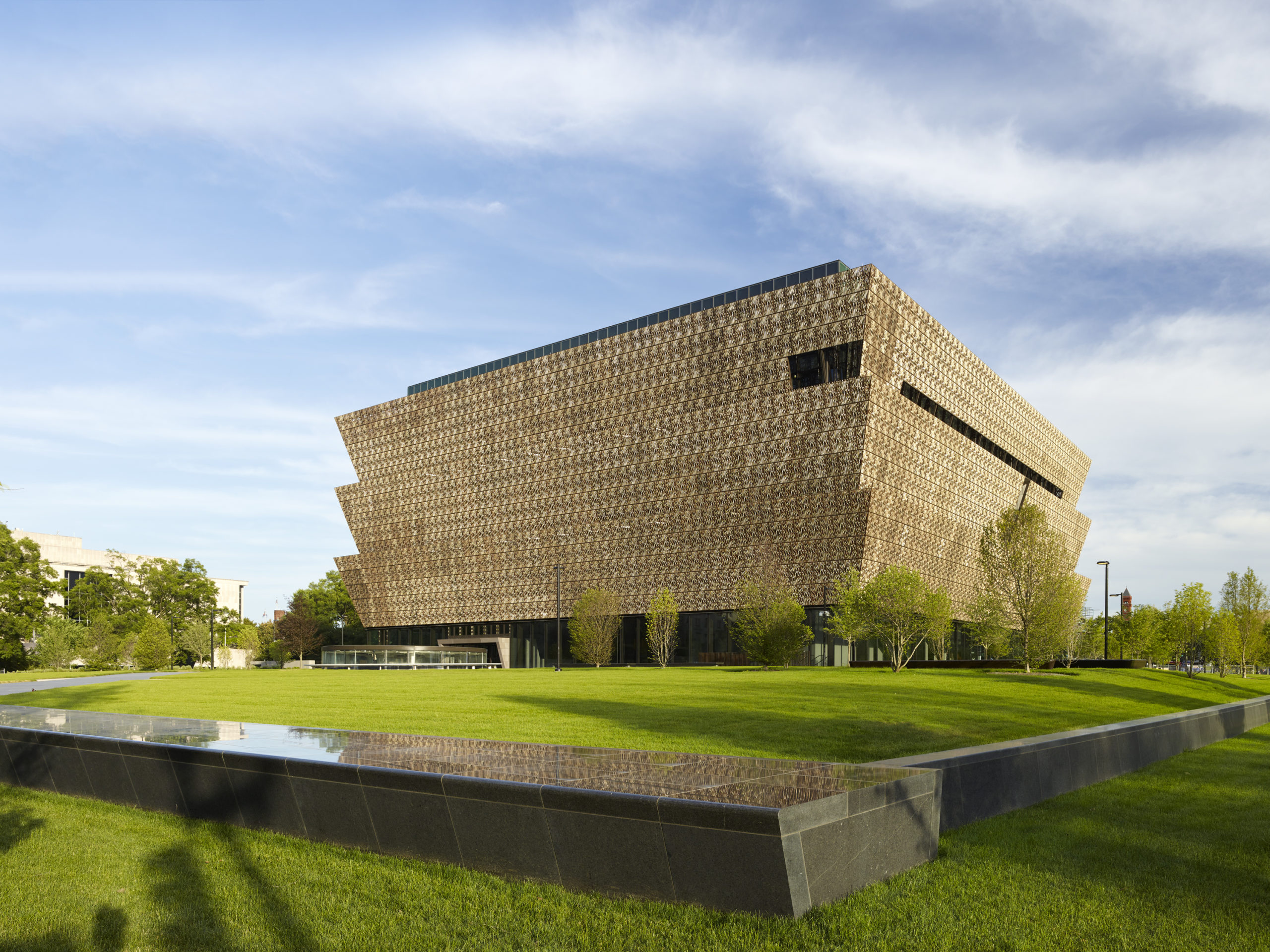 The NMAAHC intensive over structure greenroof on the north side with the glass oculus peeping through. Photo credit: Alan Karchmer/NMAAHC, Smithsonian Institution, National Museum of African American History and Culture Architectural Photography

At night, the corona glows, presenting stunning views of the museum from a variety of vantage points in and around the Mall.

The location and design of the National Museum of African American History and Culture represent the past, present, and future of the African American experience in ways that are both tangible and symbolic. 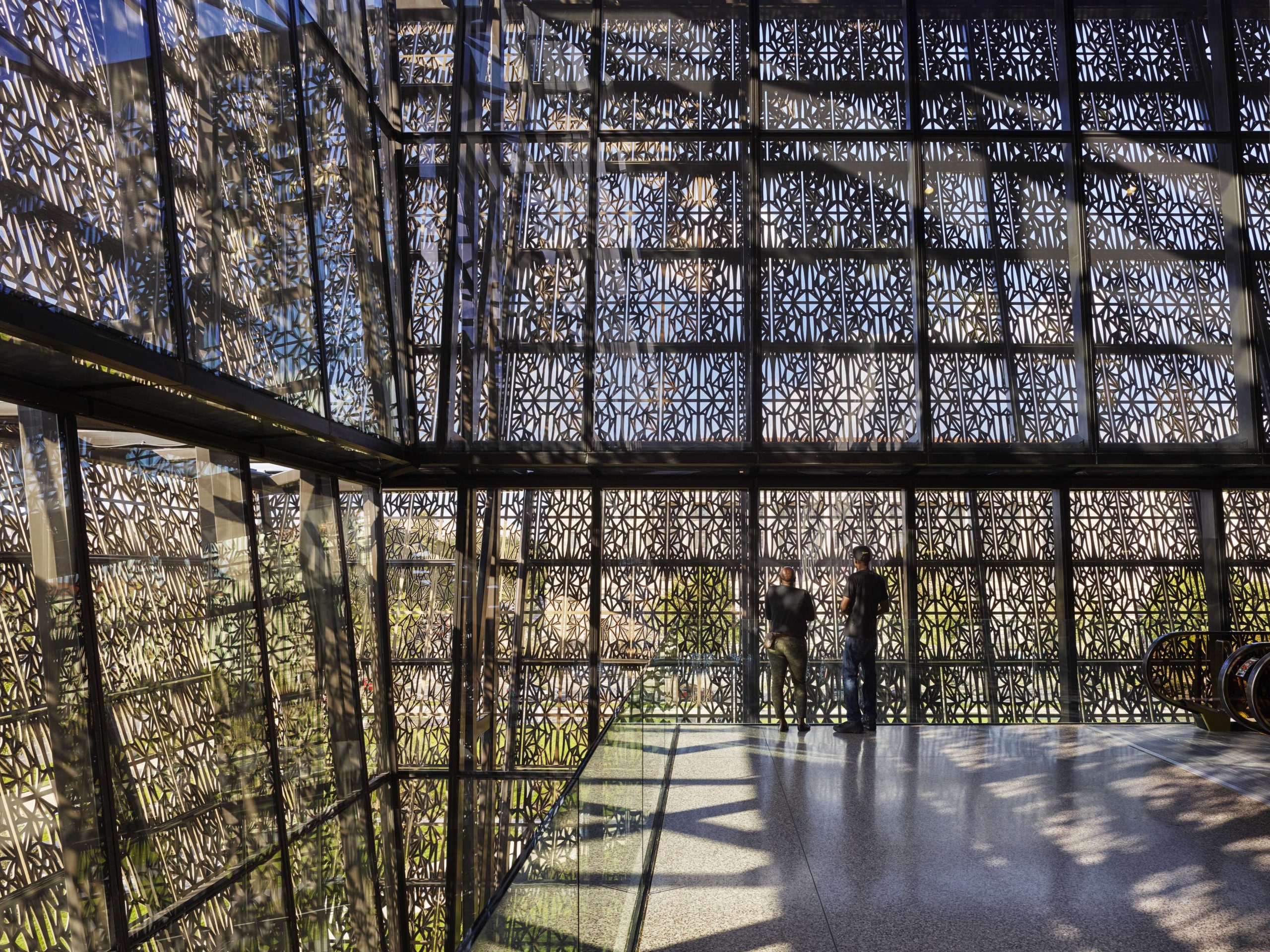 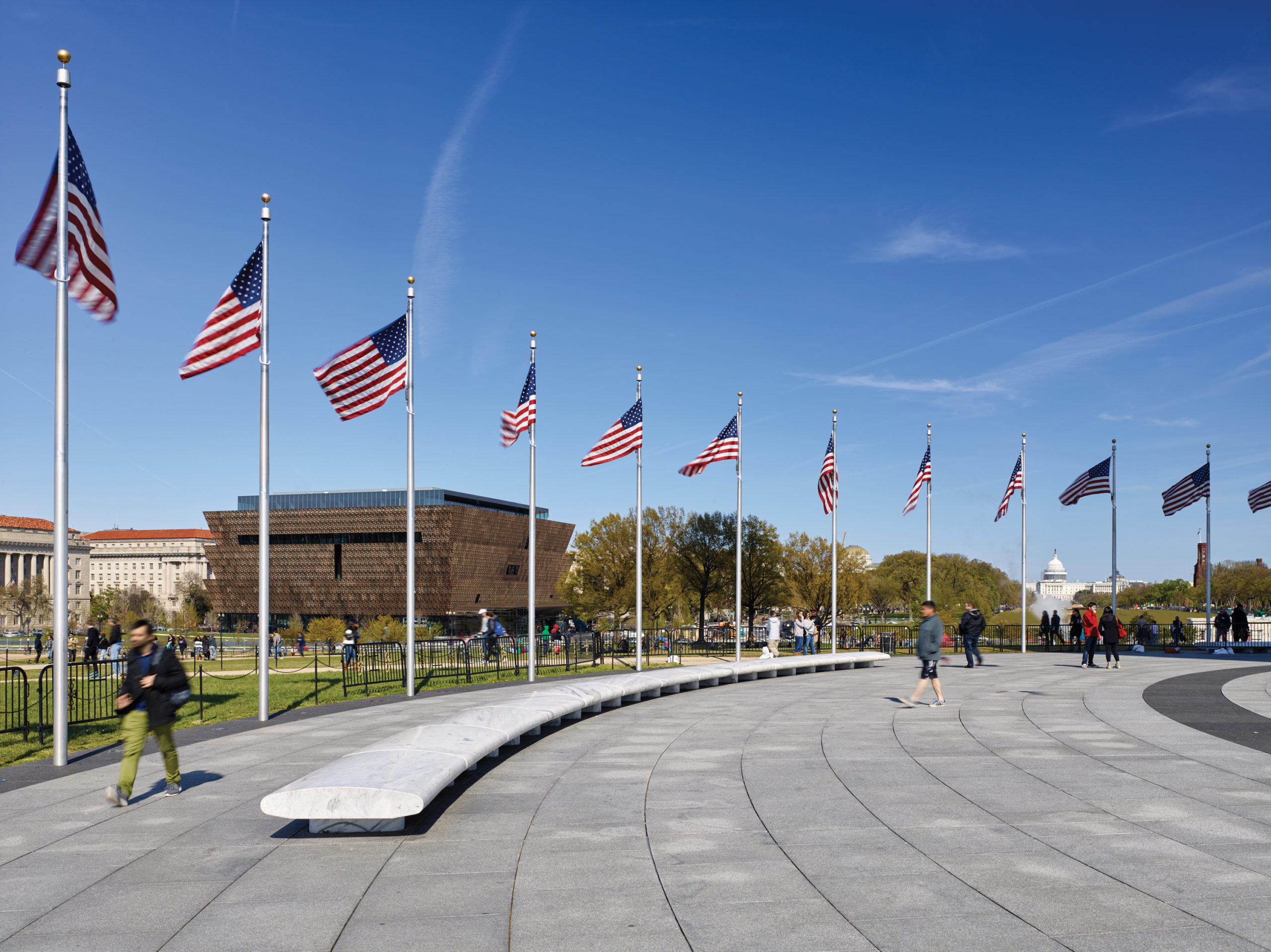 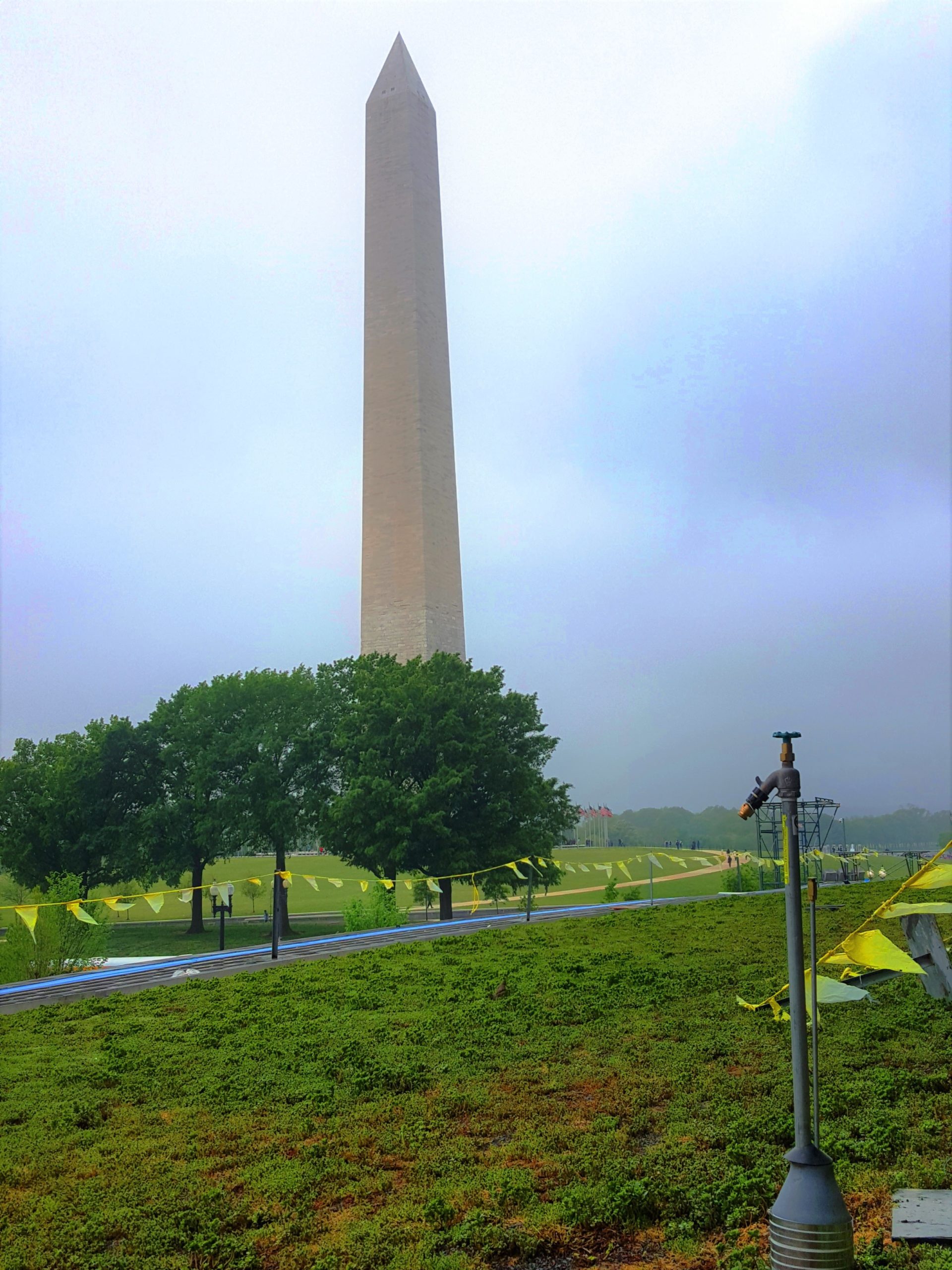 The Washington Memorial as seen from the Porch greenroof. Image: Moerings USA / Sempergreen

ARCHITECT OF RECORD:
THE FREELON GROUP 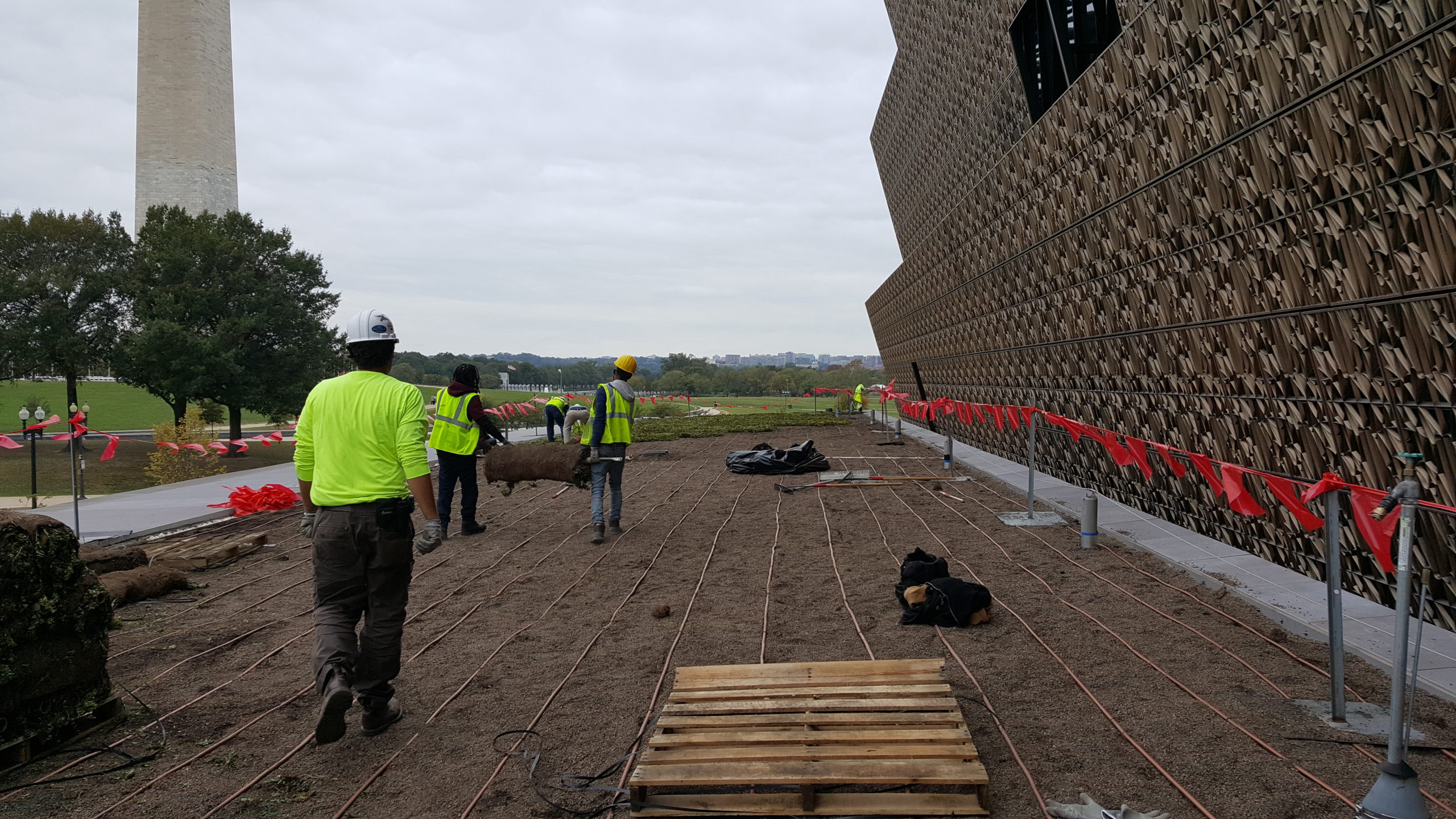 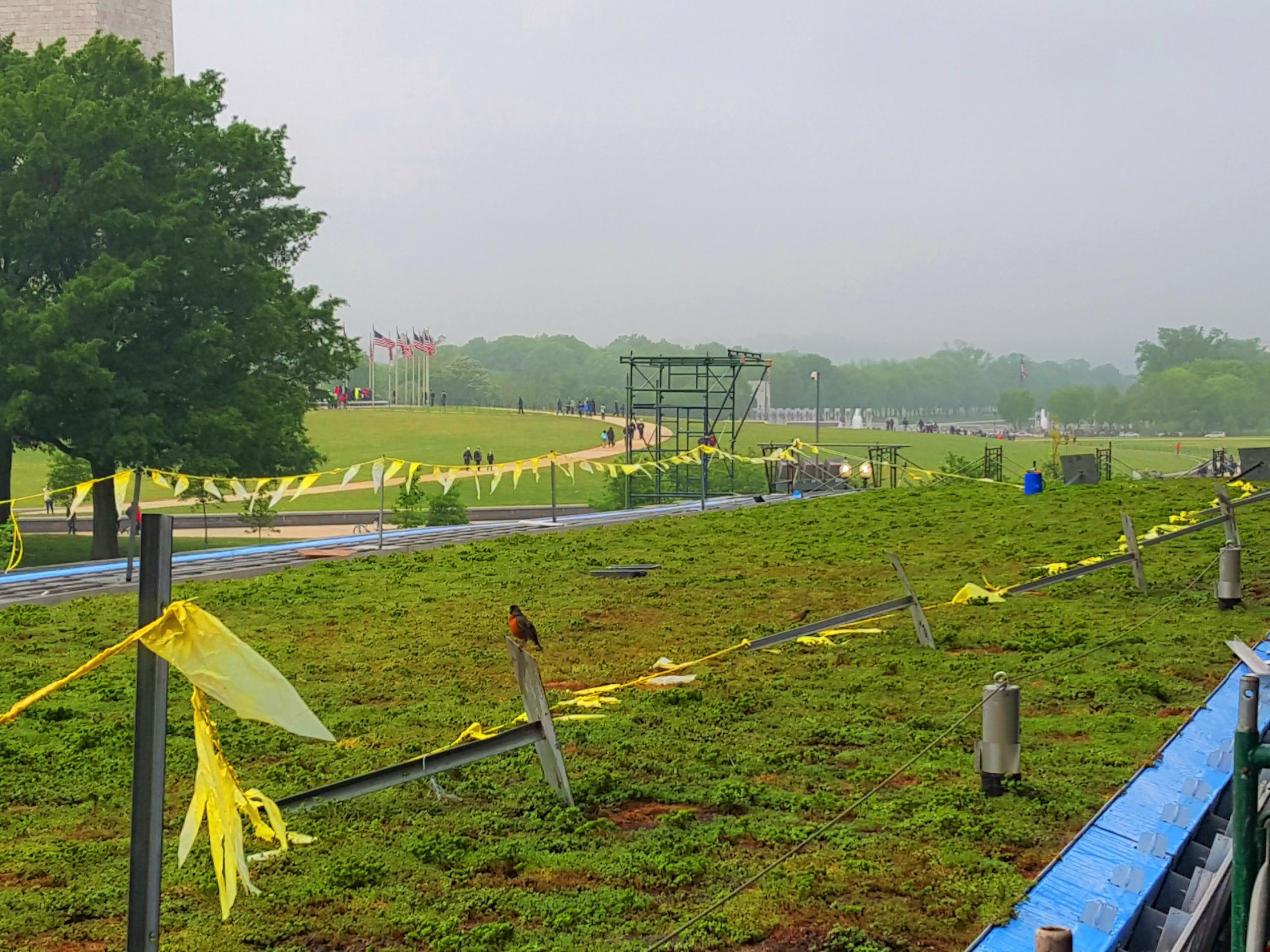 See the National Museum of African American History and Culture project profile to view ALL of the Photos and Additional Information about this particular project in the Greenroofs.com Projects Database. 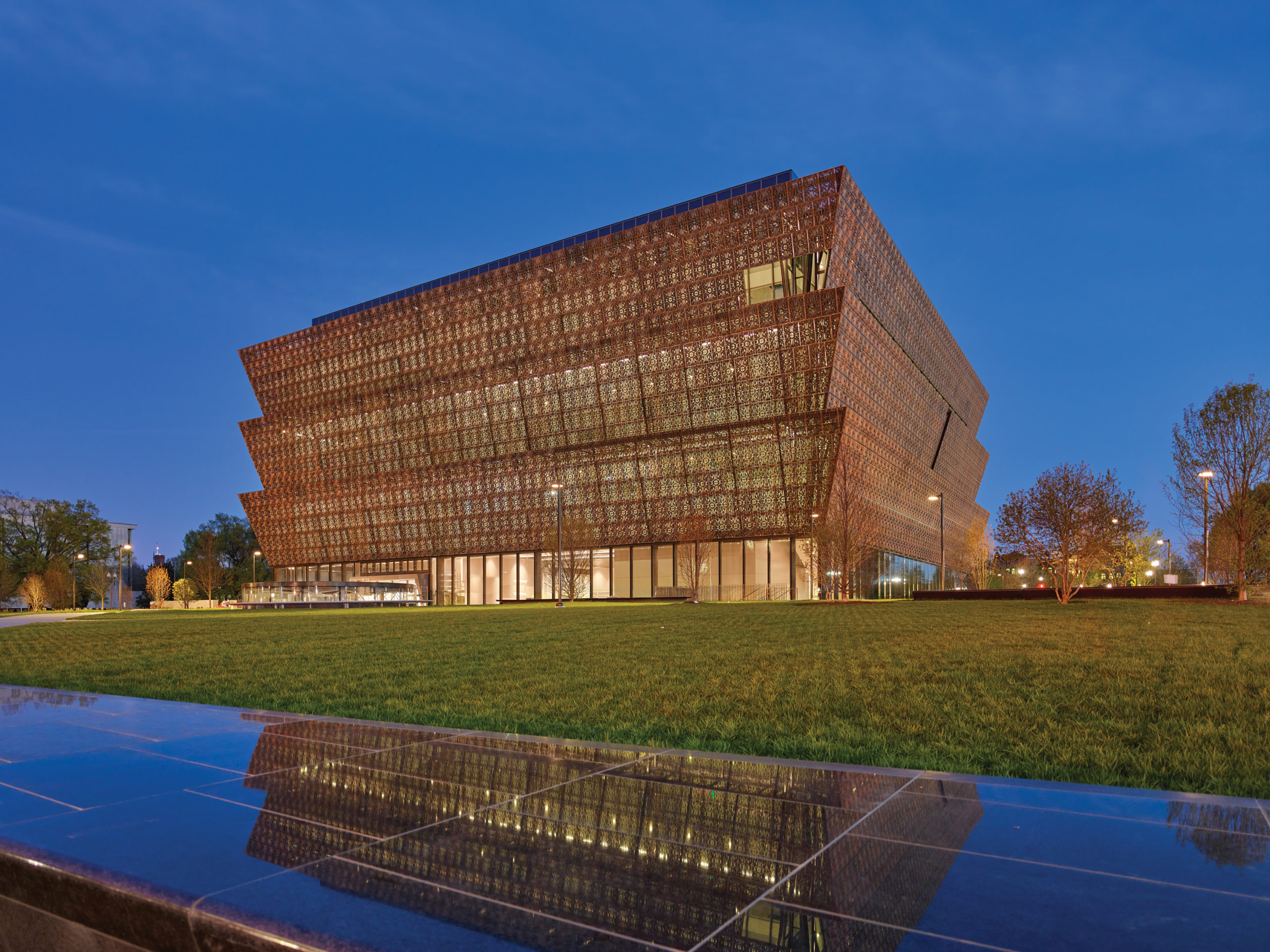