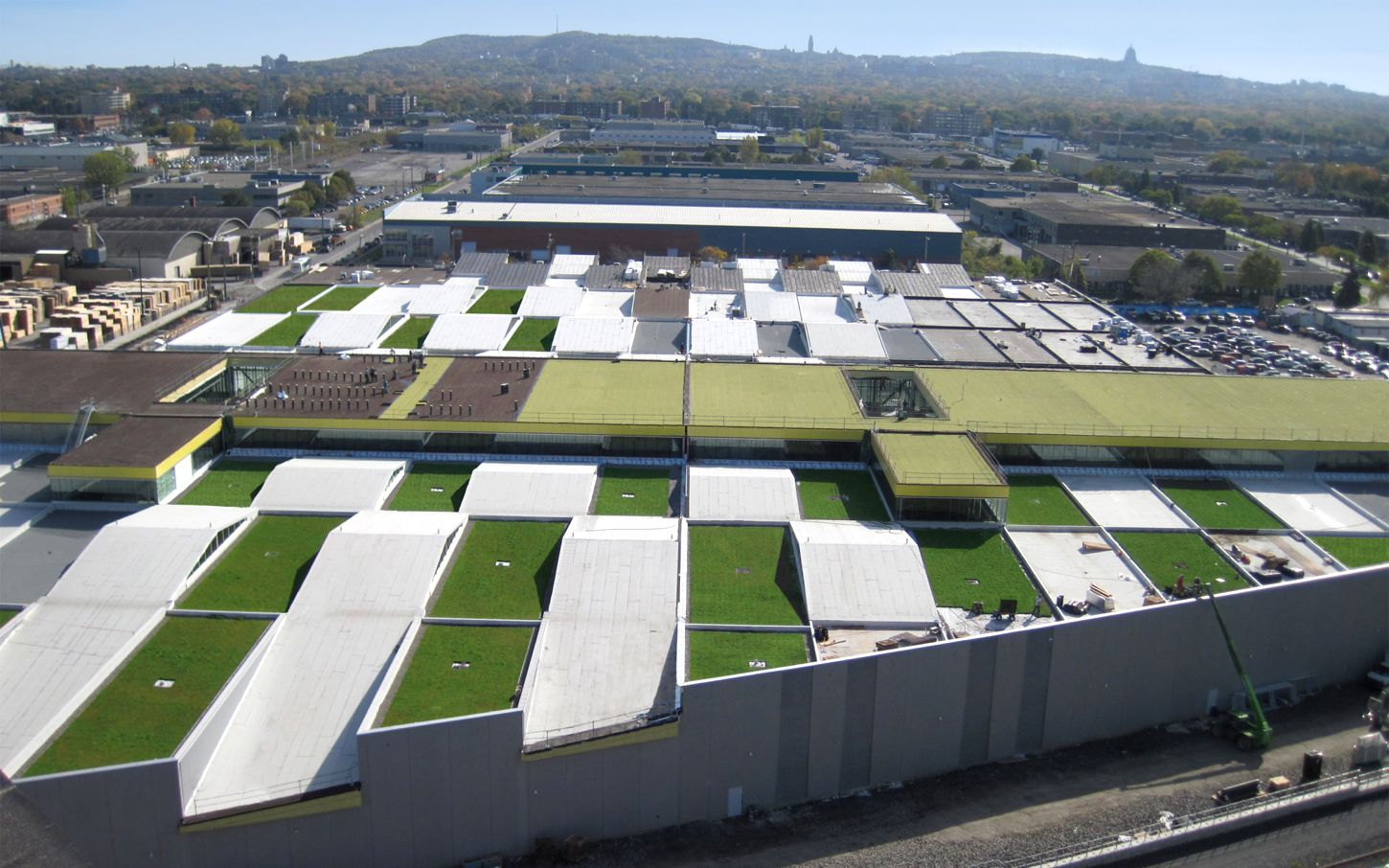 Learn about Vegetal i.D. in The Greenroof & Greenwall Directory.

The Société de transport de Montréal (STM), the Montreal Transit Corporation in English, is a public transport agency that operates transit bus and rapid transit services in Montreal, Quebec, Canada. Established in 1861 as Montreal City Passenger Railway Company, it has grown to comprise four metro lines with a total of 68 stations, as well as over 186 bus routes and 23 night routes.

Due to the increased demand for public transit, the STM needed a new transport centre to accommodate its growing fleet. In order to minimize its impact on neighboring residents, the 350,000 sf centre’s site was situated in a declining industrial sector. On January 6, 2014, the STM Stinson Transport Centre building opened to about 111 bus drivers and maintenance employees at the bus garage in Quebec. This giant two-story building has the capacity for up to 300 buses, including 100 articulated (double) buses. Stinson is expected to be the first LEED Gold certified transport centre in Canada.

Located on a 7.2 hectare site in the Saint-Laurent borough, Lemay Associés Architecture Firm designed the 165 million dollar building according to the principles of sustainable development. To meet some of the highest industry standards, everything possible has been attempted to ensure a LEED-NC Gold certification by creating a low impact development. The main objective of the project was to minimize the ecological footprint of the site by integrating most of the circulation for bus parking inside the building.

“The design intent was to achieve a seamless weaving of the project into the surrounding urban fabric…an architectural device referred to as the “weaving”. The “weaving machine” proposes to mesh together the structural grid of the building and the landscape into a new multifunctional feature which will become the signature of the project: the roofscape,” (AECCafe.com).

“The project includes building parking lots, traffic lanes and implementing different services to serve the site. With its various underground and surface retention basins totaling 3 500 m³, it is one of the largest rainwater retention and treatment projects carried out on a private property in an urban area…The project also features one of the largest steel frame buildings currently being erected in the Montréal area. It is made up of more than 4 800 metric tons of steel with large-span girders, including one that weighs over 80,000 pounds,” (Roche).

A large part of the sustainable design of this building, a very large part in fact, comes from STM’s massive green roof. In October 2013 green roofing company, Toits Vertige, installed over 80,000 square feet of Vegetal I.D.’s Standard Mix of HYDROPACK to make the STM building the largest green roof in Quebec, Canada. While the green roof was planted in October 2013, the building opened in 2014.