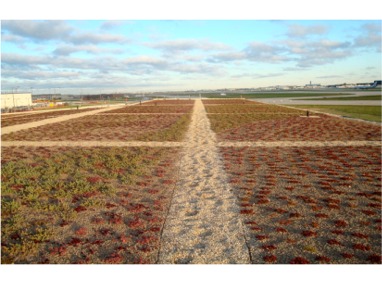 The Chicago Daily Herald of October 22, 2008 states, “This November marks the opening of the first new runway at O’Hare since 1971, located at the facility’s north end. Along with the runway comes a new air traffic control tower that has a garden atop the first floor of its base building. The rooftop has been planted with sedum, a low-maintenance ground cover.

“O’Hare is in the midst of a major rebuilding program, aimed at creating six parallel runways running east-west. As part of the new construction, workers have created 33,000 square feet of rooftop gardens. These include plantings atop a guard post, the air traffic control base building, a transformer building and a facility holding lighting control systems,” (Pyke, 2008).

Well into phase one of the O?Hare Modernization Program (OMP), executive director Rosemarie Andolino?s ?megaproject of national significance? has taken the environment into account on every aspect of the project?s design and construction. From the conception of O?Hare?s Sustainable Design Manual to efficient construction practices and vegetated roofs, the O?Hare strategy is that any area of construction where sustainability is not considered is an opportunity lost. The OMP can easily be described as one of the largest construction projects in the country occurring at one of the world?s busiest airports. Charged with reconfiguring the airport?s outdated intersecting runway system, the estimated $8 billion OMP broke ground in September of 2005, and has made considerable progress since.

Sustainable construction practices are tracked to ensure compliance with the SDM, contracts, and specifications in the areas of Diesel Vehicle Emissions Control, Construction Waste Management, Regional Materials, and Recycled Materials. The OMP Sustainable Design Manual was based on the Chicago Standard and the U.S. Green Building Council (USGBC) Leadership in Energy and Environmental Design (LEED) green building rating system.