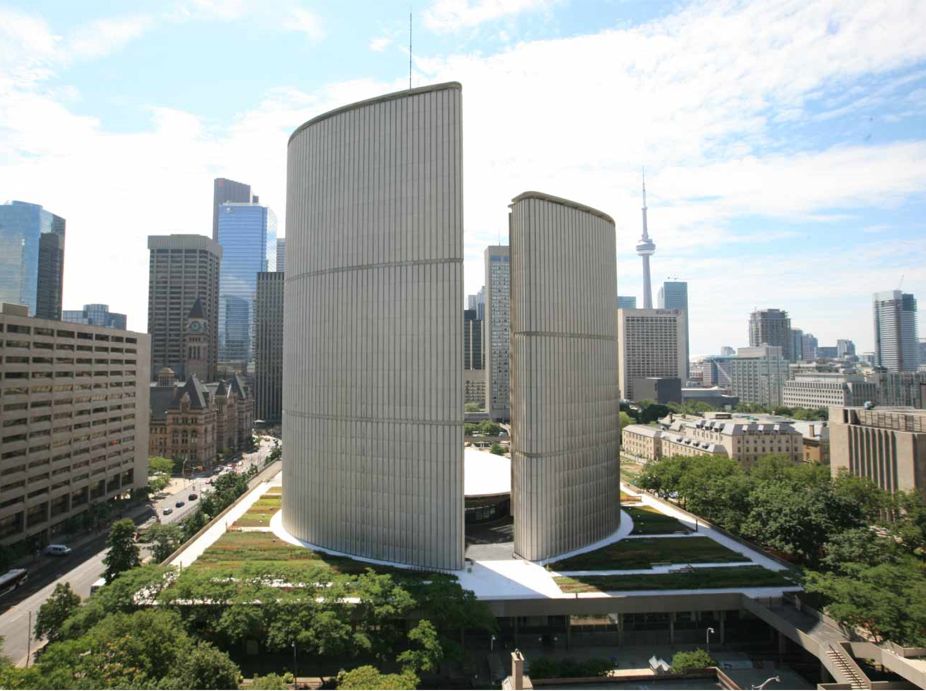 Nathan Phillips Square is Toronto’s premier public space and civic gathering place, a leading tourist attraction for the city, and a national and provincial landmark. Surrounding the 12-acre civic space at Toronto City Hall, the City of Toronto has been reinvigorating Nathan Phillips Square from 2009 to 2014 to restore its original beauty and dignity, preserve and enhance its unique heritage qualities, and reintroduce the public space as a more functional and environmentally sustainable community meeting place. In 1965 Finnish architect Viljo Revell’s modernist design of the podium level of Toronto City Hall included designs for a raised public plaza, but his vision was never completed and the podium space was abandoned for years. Construction on Nathan Phillips Square is planned to take place in three overlapping phases for completion by the end of 2014.

The design competition to revitalize Nathan Phillips Square was won by the design team of PLANT Architect, Perkins+Will Shore Tilbe Architects and Hoerr Schaudt Landscape Architecture in part based on providing a publicly accessible green roof on the podium roof surrounding City Hall. The design of the green roof is in keeping with the original architectural design of City Hall and was from the start designed to be grown and installed in a modular system. New landscaped gardens, courtyards, terraces, furniture and walkways provide unique views of downtown from this urban oasis in the heart of the city.

Although originally envisioned by Revell as a public gathering place like the ice rink/fountain in the main square, it never lived up to that billing due to the 120,000 sq ft of interlocking pavers without a shred of vegetation (aside from the green roof plots installed under the sponsorship of Green Roofs for Healthy Cities in 2000 – but now dismantled. See this original profile in The Greenroof & Greenwall Projects Database here). The green roof was opened to the public upon completion in late May, 2010, to coincide with the Doors Open Toronto on May 29 & 30 2010. This was the first time since the opening of Toronto City Hall in 1965 that the podium roof was a functional, beautiful public space.

Approximately 36,000 sq.ft. of green roof composed of interlocking and gravel pathways with concrete and wooden benches now surrounds the twin towers, bringing the entire project to 150,000 sq.ft. Made up of 6′ x 4′ LiveRoof modules, the green roof includes grasses, sedums and perennials in a kaleidoscope of colours. Now the space around the towers is a beautiful city park.

“The podium roof of City Hall is at once part of the raised walkway system and the largest and most secluded of the Square’s perimeter gardens. The new green roof consists of three formal conditions: a sedum mosaic, a paved courtyard that frames the curved chamber and a deck cafe that occupies the prow. The perimeter garden is treated as a field in purple, pink, yellow/orange and green sedums. This ground cover is planted in a prevegetated tray system with shade tolerant species concentrated in the shadows of the City Hall’s towers,” (PLANT Architects’ case study, see below).

The Nathan Phillips Square green roof was constructed with the LiveRoof brand hybrid modular green roof system. It contains a combination of 6″ deep LiveRoof® Deep System Modules and 4″ deep LiveRoof® Standard Modules with multiple plant mixes in the design. The project was grown at the LiveRoof Ontario nursery during the summer of 2009, and installation started on September 1, 2009. Twenty-two different plant blends were grown to full grown status and installed in a pre-determined ‘random’ pattern on the roof. An average of eight tractor trailer loads of LiveRoof modules were delivered to the site each week during the installation. Roofing, paver, lighting, irrigation and furniture installation were all done in conjunction with the installation of the modules.

Because of the complexity of all aspects the installation the green roof was completed in early November 2009. A preview for the participants in the CitiesAlive! 2009 Conference was held during the opening reception of the conference on October 19, 2009 – the photo left below by Linda Velazquez shows the podium green roof still under construction.

The City of Toronto is leading by example with the new 2.7-acre upper-level urban plaza garden Podium Green Roof is Canada’s largest publicly accessible green roof. Acting as Toronto’s primary public space, Nathan Phillips Square is now a vibrant, active space in the heart of the city. Every year, over 1.5 million visitors attend a variety of community and special events hosted here.