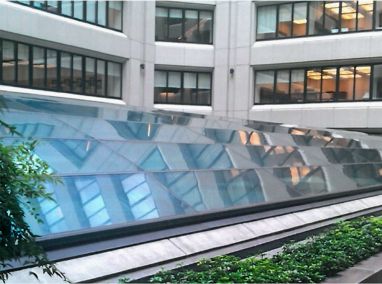 Learn about Barrett Company in The Greenroof & Greenwall Directory.

The International Monetary Fund (IMF), also known as the world’s bank, headquartered in Washington, D.C., has two buildings across the street from one another, Headquarters 1 and Headquarters 2. In 2009, IMF’s Headquarters #1 became LEED certified.

At the HQ1 Building there is a 6-story decorative exterior terrace in the center of the building that is covered with decorative stonework and intensive planters. The original waterproofing (dating from the mid 90’s) was a self-adhered sheet membrane product that had deteriorated over the years resulting in numerous leaks.

All of the existing hardscape was carefully measured, catalogued and removed and the entire deck was re-waterproofed with Barrett’s Ram Tough 250 reinforced system including root barrier, water retention and drainage, new insulation and complimentary hardscape components. Irrigation was supplied by Netafim.

In addition, the flashings were also completely redone with Barrett Ram Tough 250 rubberized asphalt. The new and old membrane system was covered with a 4 inch deep extensive green roofing system with 5 species of sedum. Barrett provided a 20 year Vegetative Roofing System warranty for both projects. See the profile of the International Monetary Fund (IMF) HQ #2 in The Greenroof & Greenwall Projects Database.