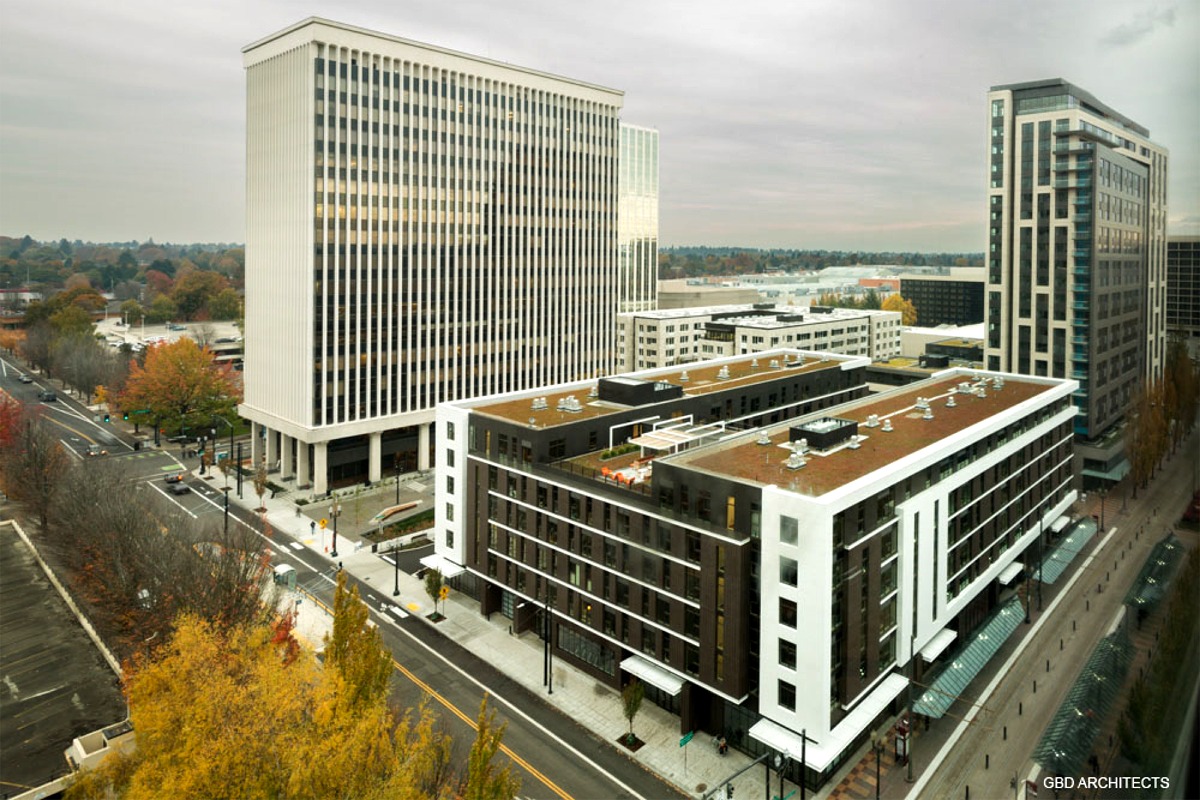 Learn about Columbia Green Technologies in The Greenroofs.com Directory.

May 13, 2019 Featured Project: Hassalo on Eighth by Linda S. Velazquez on Greenroofs.com; May 25, 2016 Hassalo on Eighth Awarded Triple LEED for Homes Platinum Certification press release from GBD Architects; February 8, 2016 How cutting-edge water technology saved Hassalo on Eighth builders $1.5M by James Cronin in the Portland Business Journal; September 2, 2015 Portland Community is a Sustainability Game Changer by Andie Lowenstein in Multi-Housing News Online (MHN); July 7, 2015 Lloyd District pioneers arrive, owners in tow by Joseph Gallivan in the Portalnd Tribune; July 1, 2015 Inside the Velomor at the Hassalo on Eighth development – photos by Kristyna Wentz-Graff in The Oregonian/OregonLive; March 2, 2015 Hassalo on Eighth, PT I: Masterplan & Site Design (Images) in Next Portland; July 2014 Deep Green by Hannah Wallace in Alaska Airlines Magazine; and the March/April 2014 HASSALO ON EIGHTH: GBD Architects transforms a surface parking lot into a thriving EcoDistrict by Russ Klettke in gb&d.

Each of Hassalo on Eighth’s three multifamily buildings received U.S. Green Building Council’s LEED for Homes PLATINUM certification in May, 2016.

The Hassalo on Eighth community transformed an underdeveloped area – previously a vast parking lot – into a vibrant, eco-friendly, 24-hour community just minutes from downtown Portland. Hassalo on Eighth is the city’s largest-ever residential development, encompassing four blocks with 657 sustainable luxury units in east Portland’s Lloyd Eco-District. Located between NE Multnomah Street and NE Holladay Street on the north and south, and 9th Avenue and 7th Avenue on the east and west, the three buildings offer over 50,000 square feet of retail space, 1,200 below-grade parking stalls, a large Bike Hub with over 1,000 bike stalls plus lockers and shower facilities, and treat their wastewater for reuse onsite.

Kyle Andersen of GBD Architects said, “We were thrilled to have the opportunity to design a large scale eco-district utilizing leading-edge technology. The integration of the multiple large green roofs covering over 38,000 square feet and the largest on-site urban waste water treatment facility in North America (aka N.O.R.M. – Natural Organic Recycling Machine) were key components to this project. It is because of the innovative water management design elements that a significant refund on SDC’s [system development charges] was provided by the city’s Bureau of Environmental Services.”

Configured with a U-shaped plan, the Velomor was the first building to open and resident amenity spaces include an enclosed private garden courtyard, and a fitness center and community room at the ground floor. The roof terrace at the sixth floor provides amenity space for the residents with a breezeway connecting the two sides. The Aster Tower also boasts a rooftop terrace for relaxing and barbecues for entertaining. The extensive greenroofs by Columbia Green Technologies cover 25,650 square feet. Columbia Green Technologies’ Extensive Layered system planted with sedum tiles was used.

The entire development, along with an existing office tower, is connected to N.O.R.M. (Natural Organic Recycling Machine), a decentralized treatment and reuse system located in the community’s main plaza. N.O.R.M. treats and recycles 100% of the grey and black water created by each of the property’s three residential buildings, along with the Lloyd 700 Office building, through a series of trickling filters and constructed wetlands.

All site sewer treatment happens in N.O.R.M. instead of in the City’s wastewater treatment system and water is reused onsite, designed to meet 100% of the toilet flushing demand, cooling demand, and landscape irrigation. As a result, approximately 47,000 gallons of wastewater is diverted from the municipal sewer system daily. The N.O.R.M. system generates no waste and bio-solids and other byproducts are used as fertilizer and fuel offsite. The natural organic recycling machine is expected to reduce water usage for the four buildings by 50 percent, which is about 7.3 million gallons of water per year. The team who worked on N.O.R.M includes: Biohabitats; Turner Construction – Concrete Structures; D&R Masonry –Waterproofing membrane; JH Kelly – Plumbing systems; Berg Electric – Electrical Systems; Coffman Excavation – Fill media; and Teufel – Landscape.

“Every used drop of water from sinks, toilets, showers and laundry (black and grey wastewater) is collected and stored by NORM. NORM then uses innovative treatment technologies to process/clean the wastewater. NORM’s high tech filtration and disinfection system creates the highest quality of reclaimed water that goes back into the community system to irrigate landscape and flush toilets. The rest of the water is so clean we can release it into the groundwater.

Designed with state-of-the-art technology and controls, NORM meets the highest standards for wastewater treatment and reuse and is monitored 24/7 by certified wastewater operators to ensure optimal system performance, water quality and resident safety.” ~ Hassalo on Eighth

Due to the cutting edge stormwater management strategies the project was allowed a refund of the system development charges (water and sewer fees) which the owner, American Assets Trust, had to pay for this new district. The refund totaled $1.48 million, almost half of the City’s three million dollar fee.

“The City of Portland teamed up with Hassalo on Eighth to support NORM and offered creative technical, policy and financial support due to NORM’s ability to reduce wastewater sent to the city’s limited sewer system… “Hassalo on Eighth embraces Portland values — innovation, environmental consciousness —with its NORM system, incredible Bike Hub, and host of environmentally friendly features,” said Portland Mayor Charlie Hales. “It sets a bar for Portland development as we continue to push ourselves to live more sustainably,” ” (MHN, 2015).

Wade Lange of American Assets Trust said, “Hassalo on Eight is one of the most innovative and self-sustaining developments within a recognized Eco-District in the nation. In my opinion, this will be the modern building standard for the construction of resilient cities. The Columbia Green Technologies green roof is significant to the performance of our buildings as it retains stormwater on the roof, reducing demand on an already undersized city storm/sewer system.”

The Eco-District design strategy places emphasis on livability with sensitive planning and innovations in urban ecological infrastructure. Along with N.O.R.M., the greenroofs and rainwater harvesting gardens are part of the stormwater capture system, redirecting it away from stressed city sewer infrastructure and having a net positive impact on stormwater.