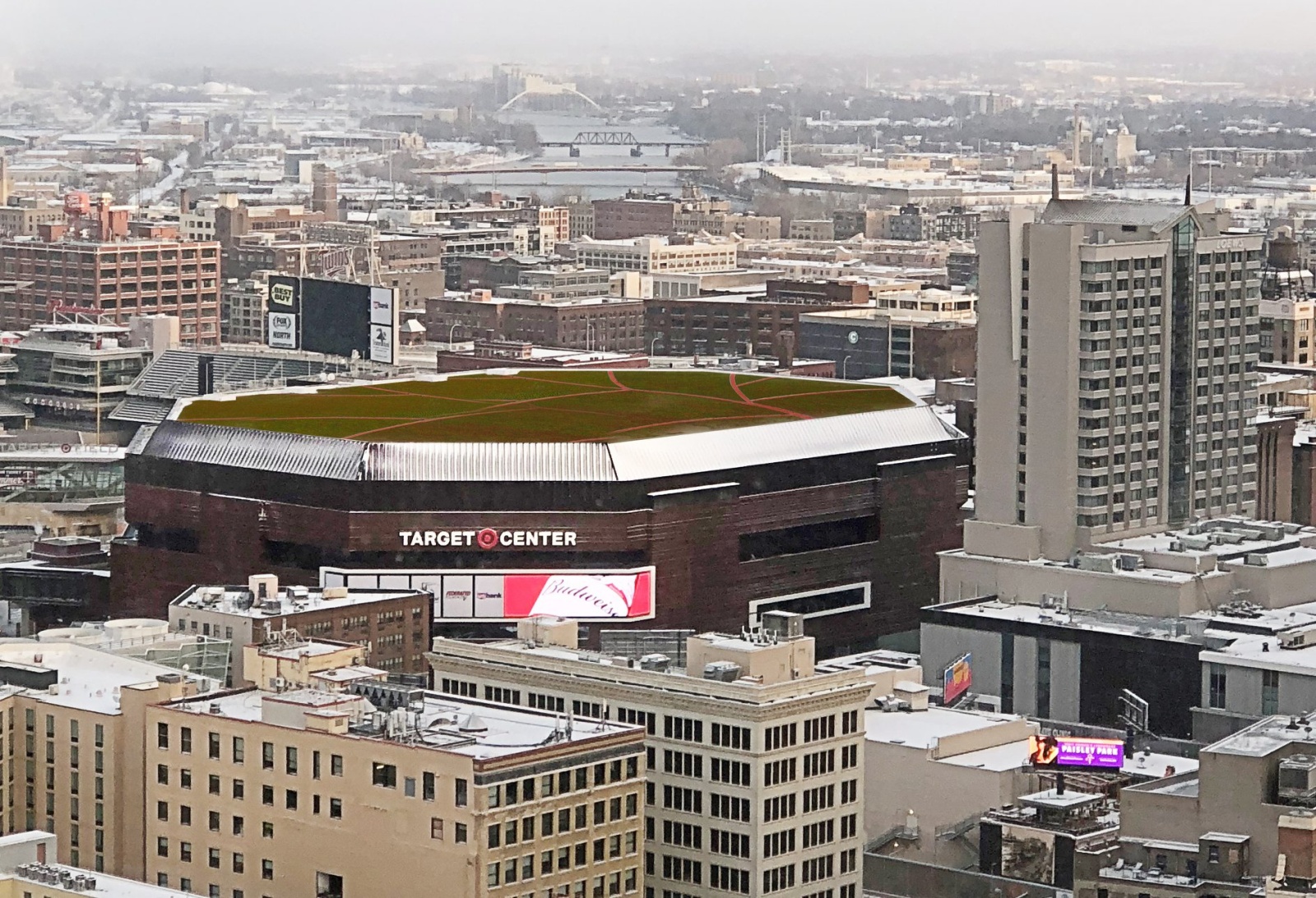 Learn about these other companies in The Greenroofs.com Directory: rooflite®; Sika Sarnafil; and Green Roof Technology. The City of Minneapolis Target Center Arena was featured in The 2010 Greenroofs of the World™ Calendar for the month of April.

June 27, 2009 1:36 installation video On Top of the Target Center  by FinanceandCommerce on YouTube.

The 20,500-seat Target Center is home of the NBA’s Timberwolves, concerts and other events, and when the Target Center Arena needed a new roof, the City of Minneapolis chose to model a sustainable building and stormwater management approach by re-roofing with a green roof. “The green roof was built as part of an overall project undertaken by the Department of Community Planning and Economic Development, City of Minneapolis (CPED) to replace 29 conventional roofs on five levels of the Target Center,” (Leo A Daly, see below).

At 113,000 sf, the Target Center Arena green roof, the fifth largest extensive green roof and the first green roof installed on an arena in North America (as of August, 2009), mitigates the urban heat island effect, greens views from above, provides wildlife habitat and improves urban air quality on a scale that is not feasible at grade in an urban area like downtown Minneapolis, and will last twice as long as a conventional roof. It also mitigates stormwater runoff from a significant amount of impervious surface in a downtown location where space does not permit use of other Low Impact Development Techniques for stormwater management at grade. From afar, the pattern of the pavers that divide the growing zones reveal a design based on veins of a leaf.

“Nearly 1 million gallons of storm water will be captured annually by the 2.5 acre green roof to prevent drainage into the Mississippi River,” (Target Center website). Such positive impacts on local water bodies are valuable in a City that prides itself on its legendary waterbodies: The City of Lakes in the Land of 10,000 Lakes. The City of Minneapolis Target Center Arena greenroof was completed in September, 2009.

The Target Center Arena received a Special Recognition Award of Excellence from Green Roofs for Healthy Cites in 2010 – also read the cover story in the Fall 2009 Living Architecture Monitor.

A state-of-the-art waterproofing membrane was used to withstand constant dampness, high alkalinity, and exposure to plant roots, fungi and bacterial organisms as well as varying hydrostatic pressures. To test for leaks and facilitate pinpointing the exact location of leaks throughout the roof’s lifespan so that the amount of overburden removed can be minimized, an Electric Field Vector Mapping® (EFVM®) leak detection system was installed. The Target Center green roof consists of a 2.75 inch deep growing zone in the center of the main arena roof structure and a deeper 3.5-inch growing zone around the perimeter where the structural capacity is greater to maximize the growing medium available for plant growth. The growth media used was rooflite® Extensive MCL, engineered for the Target Center by Skyland USA.

A pre-grown sedum mat was supplemented with native plugs and seed to enhance plant diversity and ecological resilience and to reflect the mix of flora found in the dolomite bluffs overlooking the Mississippi and Minnesota rivers. Over 30 species were originally planted on the roof including a variety of Sedums and Minnesota prairie plants such as Columbine, Lanceleaf Coreopsis, Wild Strawberry, Dotted Blazing-Star, and Lupine. The lupines were planted to target the Karner Blue Butterfly, a federally listed endangered butterfly that needs lupines to survive. “Though few plants have failed on the roof, those in one small spot do succumb to the elements or die off for unknown reasons every now and then. When that happens, sedum is cut off and scattered around so it can reroot,” (MinnPost, 2011). Unfortunately, the lupines did not survive, much to the disappointment of researchers and those hoping to learn more about the endangered butterfly.

Designer Peter MacDonagh of the Kestrel Design Group said “There is a 20-year maintenance guarantee on the project for the vegetation-no more than four square feet of bare soil on the roof at any time,” (AIArchitect). More than 11 miles of sustainable, water-efficient irrigation lines with piping spaced every 24″ were installed to water the plants during plant establishment and droughts, and 14,000 cement pavers were laid for firebreaks and roof protection. “While the project called for 50% recycling of materials, the Tecta (America) team set its own goal of recycling 100% of the old roof, resulting in an estimated 450 tons of existing rock and 590 tons of existing pavers, 140 tons of existing roofing membrane and more than 60 truckloads of existing roof insulation,” (AIArchitect, see below).