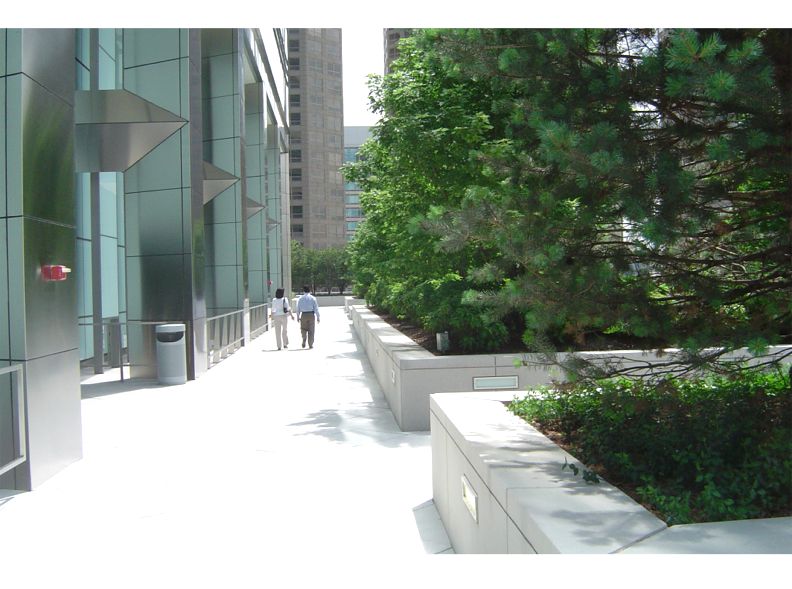 ABN AMRO Plaza is located at 540 West Madison Street, Chicago, Illinois, 60661. It was featured in the 2009 Greenroofs & Walls of the World™ Calendar in the month of December. See the project profile from Turner Construction Company here and Thornton Tomasetti here; and view exterior photos of the building at Chicago Architecture Info here. Contact the architect De Stefano and Partners, Ltd. at www.destefanoandpartners.com and the landscape maintenance sub-contractor Christy Webber Landscape at www.christywebber.com. Learn about the following companies in The Greenroof & Greenwall Directory: Midwest Trading and Barrett Company, Waterproofing Consultants and Material Suppliers.

ABN AMRO Plaza is a 1.4 million square foot, 29-floor commercial office building located in the West Loop area of Chicago, Illinois and is certified LEED-EB Gold. The green roof on the 6th floor was built primarily for use by employees of ABN AMRO. It was designed to be an occupied green roof with 50% planted area and 50% paver area with plantings which are a mix of trees, perennial plants, and annual flowers in planters of mixed heights. The lawn area was planted with sod. The trees were planted fairly large and have grown quickly, so the green roof looks mature and gives a true garden feel. It is readily available for all employees to take advantage of as well as contributing to the overall greening of Chicago.

With former Mayor Daley’s stated objective of making Chicago America’s greenest city, this building has contributed towards making Chicago a cleaner, healthier, more energy-efficient environment for Chicago citizens. From earliest times, human beings have been affected by their association with green environments as a viable treatment method for clearing their heads, reducing stress, relieving tension, breathing easier, or just finding a moment of peace in their daily routine. Finding or recreating the “natural world” in a densely populated area is a gift to all who are exposed to the restorative properties of nature. Francis Bacon (1625) eloquently made this case in his Essays on Gardens, when he said, “God Almighty first planted a garden and, indeed, it is the purest of human pleasures.”

ABN AMRO was designed purposefully with accessibility and recreational use by all of the employees that work in the building. The impervious surfaces of cities such as concrete, bituminous roofing and the wide variety of hard surfaces, soak up solar energy and reradiate it as thermal infrared radiation otherwise known as “the heat island effect.” As a result of this, cities are warmer both day and night more so than the surrounding suburban areas. This can have profoundly negative effects on air quality in the city. Green roofs can reduce this effect and ABN AMRO is now a part of the change for the better of the citizens of Chicago. ABN AMRO is participating in Chicago’s program for green roofs to help reduce the amount of stormwater runoff originally attributed to urbanized areas generating considerably more run-off than natural areas of the same size due to a greater percentage of impervious surfaces which impede water infiltration.

The project has won numerous awards including the IIDA Design Award, Crain’s Real Estate Development of the Year and Midwest Construction Commercial Project of the year. And, the ABN AMRO Plaza, 6th Floor Podium Greenroof won the 2007 Green Roofs for Healthy Cities Awards of Excellence in the Intensive Industrial/Commercial category – see the write up here.

The maintenance required: Spring consists of an initial clean up after the winter months followed by summer weekly service which begins in April and ends at the end of September; lastly, Fall clean up starts in September and lasts until the end of November.