Friends of the High Line, the advocacy group that helped bring about the creation of the High Line park, is currently maintaining the park in partnership with the New York City Department of Parks and Recreation. Maintenance issues are to be expected in such an innovative design, as some maintenance practices must evolve as gardeners and other staff find what methods work best.

To date the costs per acre for maintenance are considerably higher than any other park within the city’s park system, at $ 671,641 per acre or almost $ 1,679,000 per hectare (according to the New York Post). Phase One and Phase Two total 4.78 acres.[5] 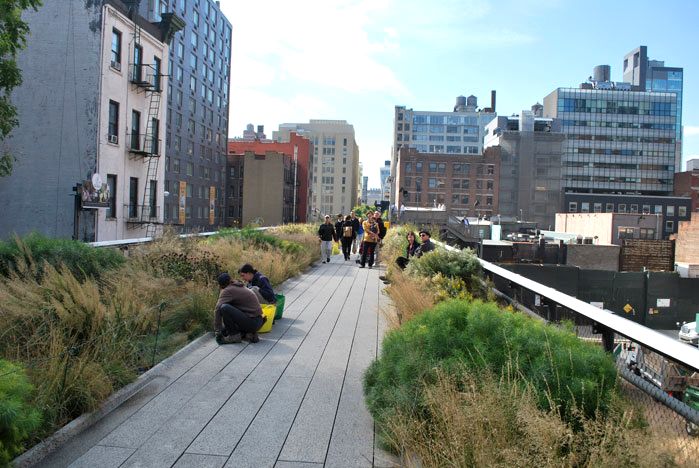 The width of the High Line varies from 30 to 88 feet so it’s difficult to approximate the acreage of Phase Three which is being planned and partly under construction. Since the first two sections are each half a mile long, if one thinks of Section 3 as similar ball park dimensions, then the finished High Line could approximate 7 acres.[6]

This matches the proposed total area in an earlier 2002 planning study, yet I would not be surprised if this grand total increases as there are significant areas, such as the Gansevoort Street entrance where considerable at-grade areas directly below the High Line seem to be within the purview of the park. 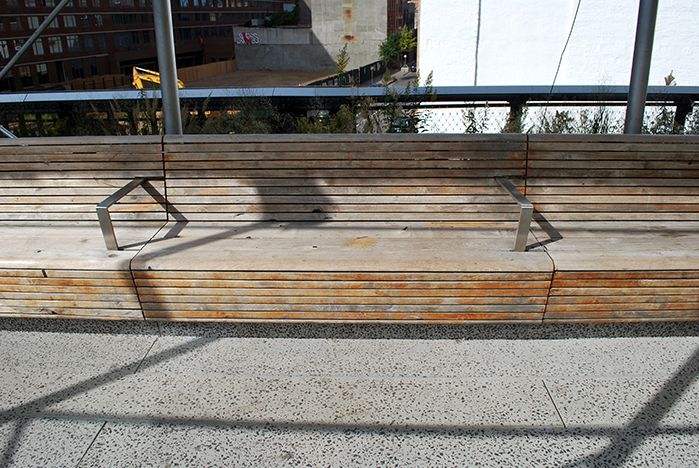 The integrated nature of the design vocabulary, such as the benches, may create complex maintenance requirements, as removing one component for repair or replacement may be difficult. Although the park was first presented to the public as a natural landscape, it is a series of gardens requiring irrigation, pruning, deadheading, weeding, garbage pick-up, and the upkeep of the new knee-high cable system, the drinking fountains, the water feature, signage and lighting systems. 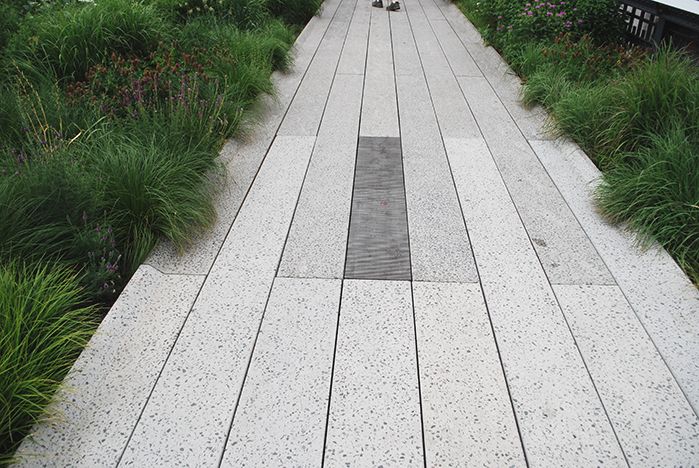 Looking south where Phase One work meets the newer Phase Two work, one can see a darker tone to the Phase One pavements since they have experienced a longer period of continual pedestrian use; 6.16.11.

The concrete plank pavement system is light colored, so it shows stains easily, a common sight since there are now many food carts and vendors. Wads or remnants of chewing gum are occasionally visible. 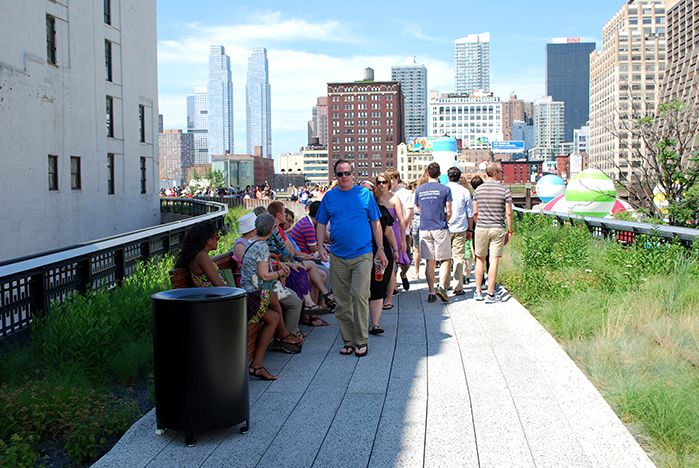 There are an adequate number of trash receptacles; oddly, unlike the pavements and benches, they are not integrated in design. As a result their locations sometimes appear arbitrary or crowd the space near benches or other integrated design elements. 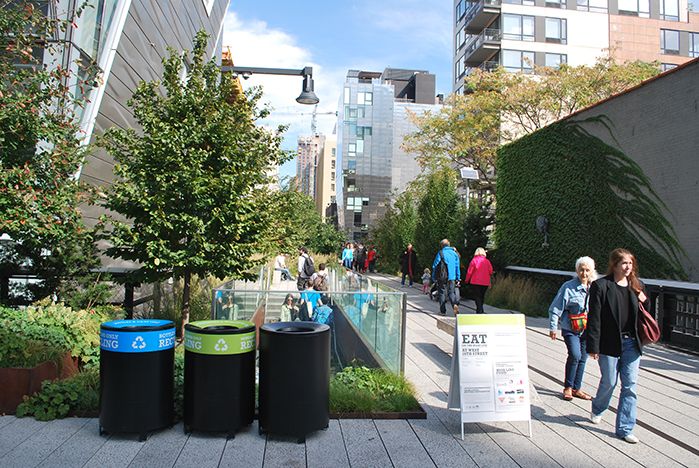 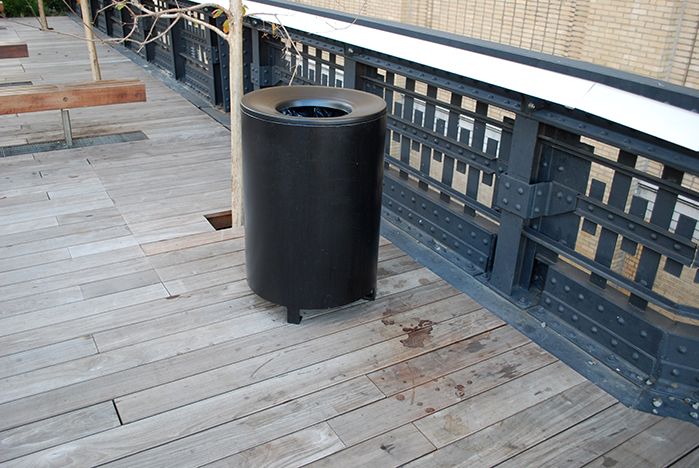 There is rarely graffiti, as the park maintenance staff is sufficiently aggressive in cleaning and removing these as fast as possible. One afternoon I observed a team of High Line employees take stock of a newly stenciled advertisement. A phantom artist painted it on the pavement and then made a quick getaway. The work did not remain in place for long. 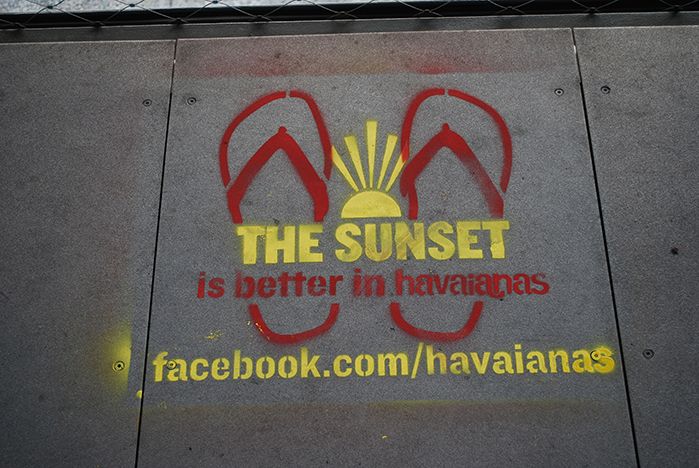 Although over 75% of the more than 200 species of plants are native in the High Line, they come from many different regions and have different growth rates. Since in many locations native plant materials are combined with non-native ones or materials from different regions, how these plants will co-exist cannot be entirely predicted, so on occasions maintenance is expected to cut back overly aggressive plants, remove dead plants or encourage more tender ones. 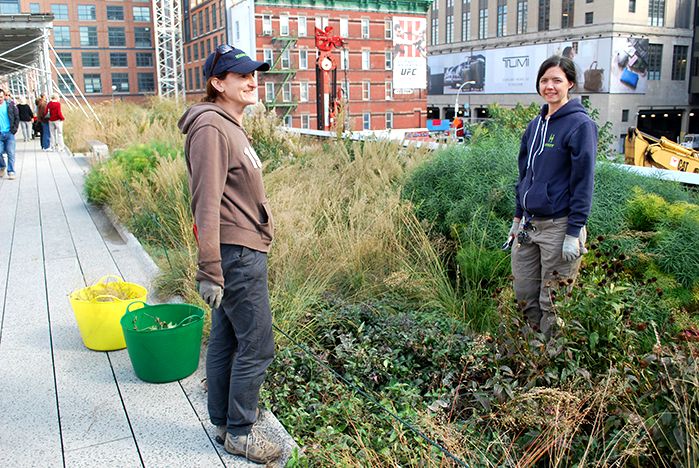 The knee-high cable system was introduced after the High Line initially opened to prevent pedestrians from wandering into the planting beds and to help define the boundary between the pavements and the plantings, as the edge of the subtle, curving pavement design can sometimes be hard to perceive. The cable requires continual maintenance, as it is common for people to step on or lean against and bend the cable supports, and there is no standardized location for installation. I’ve noticed the ends of cables tied to benches or other random elements. 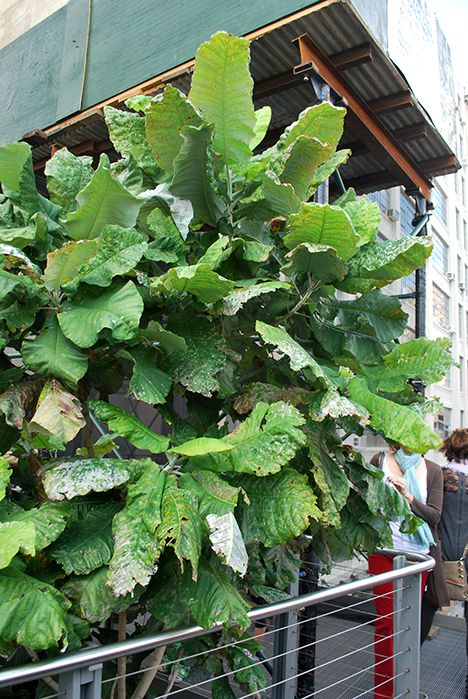 Finding the proper balance is always a challenge. In some green roofs the approach is to “let nature take its course,” and if some plants die out and others dominate, this is not a problem as long as the green roof is achieving its basic functions. This is not an effective management guideline for the High Line. 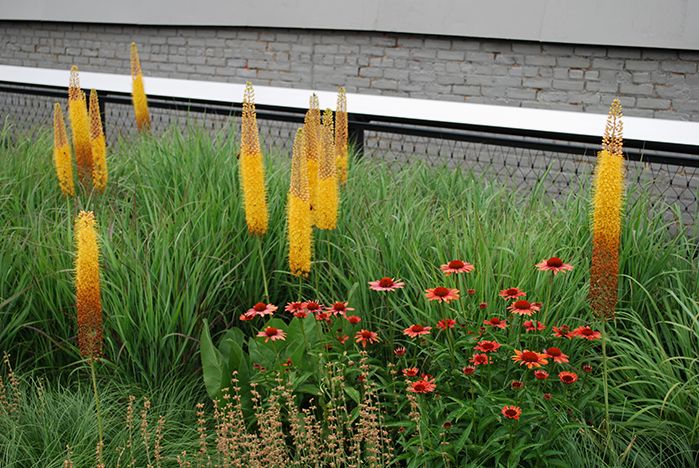 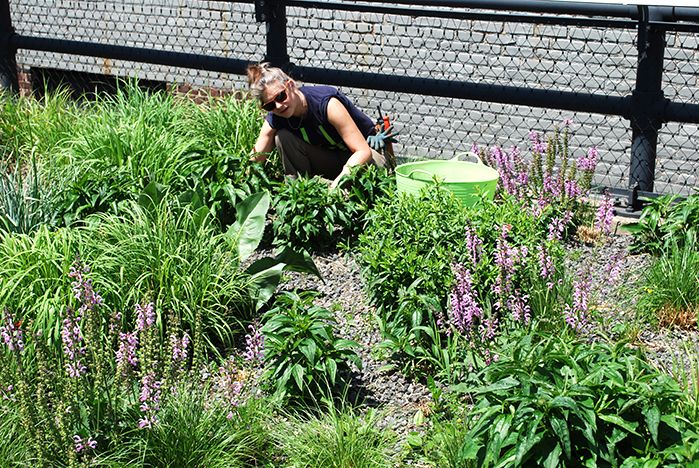 There is a more comprehensive use of irrigation in the second phase than the first. In recognition that even predominantly native vegetation needs watering while it is getting established and during periods of drought, there was substantial manual irrigation in the first phase, while the second phase included drip irrigation throughout most of the planting beds, particularly in the forest of trees by the Falcone Flyover, where several species of magnolia are adapting well. 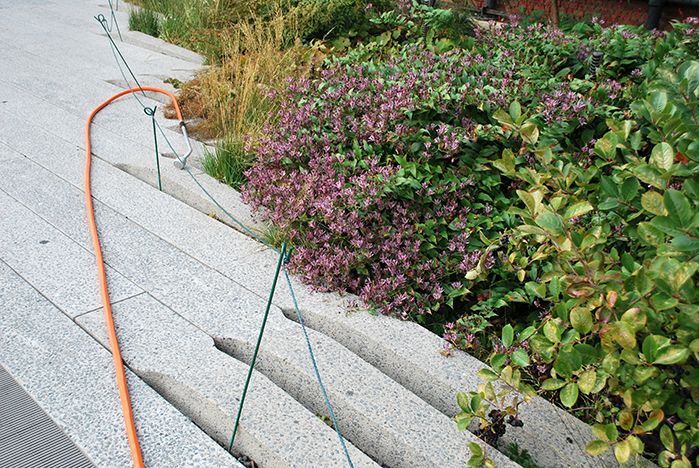 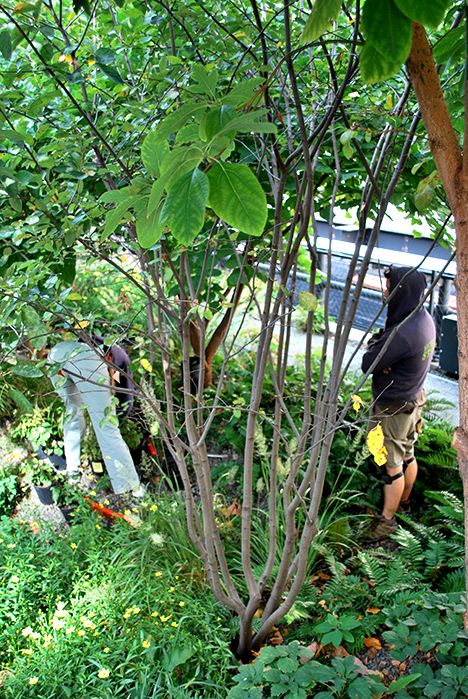 I’ve observed irrigation being added to areas which previously had only manual coverage, such as the principal lawn area (about 4,900 square feet) and some planting beds. 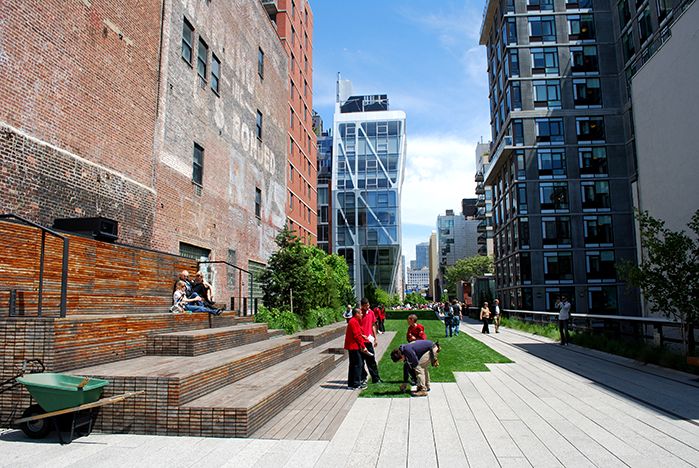 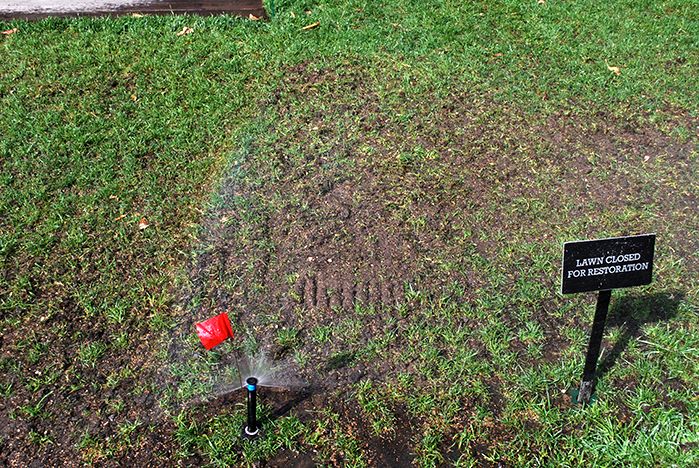 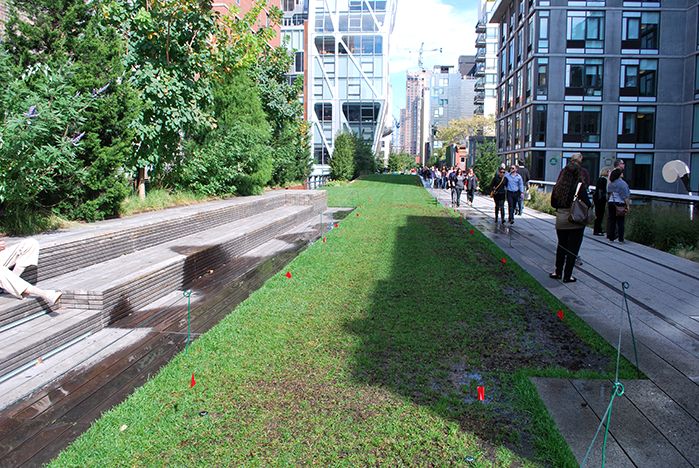 It is very difficult to maintain thriving plantings, even of native plants, without a greater depth of soil and less wear and tear from pedestrians. The High Line is an intensive green roof with relatively shallow depths of substrate. The depth of soil is between 18 inches and 36 inches, where trees are planted.[7]

Many of the plantings on the High Line are native to deep, well watered soils, so irrigation is required when these same plants are situated at much shallower depths in the midst of adverse urban weather conditions. I believe the increase and upgrade in irrigation systems are a result of learning from the first phase that such maintenance is essential. 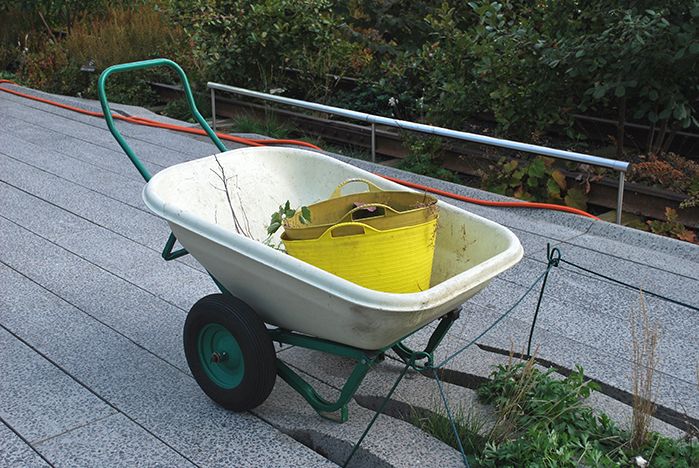 Come back next time for Part 9 of “A Comparison of the Three Phases of the High Line, New York City: A Landscape Architect and Photographer’s Perspective” where I’ll discuss Phase Three.