There are several ways cities can prepare for extreme heat, from changes in infrastructure—like solar and battery “microgrids” that can keep air conditioning on at cooling centers if the heat takes the grid down—to shifts to different cooling technology, like geothermal power. But three solutions are both particularly simple and particularly helpful. “We need to reduce greenhouse gas emissions,” says Matt Petersen, president and CEO of the Los Angeles Cleantech Incubator and the former chief sustainability officer for the City of L.A. “That’s job number one, for long-term benefit to reduce the most extreme heat from happening. But now that extreme heat is here, we need to make sure we put in place strategies to reduce the new normal of extreme urban heat through cool streets, cool roofs, and robust urban tree canopy.”

As days of extreme heat get more common, there are a few simple solutions that cities around the world are implementing to keep people a little more comfortable.

COVERING CITIES AND BUILDING WITH TREES
Cities like Melbourne are mapping their street trees and carrying out massive tree-planting efforts. Melbourne plans to double its canopy cover by 2040. Milan plans to plant 3 million trees. There are multiple benefits, but one is simple: As trees shade streets, and water evaporates from their leaves, they cool neighborhoods. In Dallas, one program mapped the areas of the city that were hottest because of a lack of trees, and then started planting them on key pedestrian routes, like the paths that students take to school. Madrid embarked on a plan in 2016 to begin planting greenery wherever space is available.

In some cases, greenery is going directly on roofs and facades. In Milan, the Bosco Verticale (“Vertical Forest”) building is covered with trees on balconies. “We designed the balconies to accommodate really significant green infrastructure,” says Brian Swett, director of cities and sustainable real estate at the engineering firm Arup.

COATING STREETS AND ROOFS
In New York City, the city has coated more than 10 million square feet of rooftops with a white, reflective coating over the last decade. The coating helps lower temperatures inside buildings, helping people feel more comfortable and use less air conditioning; like cars, air conditioners are both another major source of emissions and make cities immediately hotter as the machines vent heat outside.

Green roofs can play a similar role in cooling buildings, and at a larger scale, neighborhoods. “From a city perspective, a roof garden on a single building isn’t going to move the needle, but when you do it in aggregate, it can have massive impact,” says Swett. Check out the Jacob K. Javits Convention Center as evidence of large scale green roofs.

DESIGNING BUILDINGS TO STAY COOL
Green and “cool” roofs and facades are one way to keep temperatures down inside buildings, but there are other ways to cut the need for air conditioning. Automatic shades can cover windows when the sun shines directly on them—in an office building, this might happen early in the morning before employees come to work. Automatic windows can open at night, when sensors detect that temperatures are cooler, and then close before it warms up. Material choices also keep buildings cool. The thermal mass of concrete, for example, means that a building can be cooled in advance of a heat wave. “If everybody’s turning on their air conditioning at the same time, that stresses out the grid and leads to brownouts and power outages,” says Swett.

Since extreme heat is predictable several days in advance, a building with thermal mass can be cooled before the heat hits and then stay cool without stressing the grid. As it works on building designs, Arup uses tools to predict how the building will react in future climate conditions. Check out the California Academy of Sciences in San Francisco, CA for another example.

Read more: Cities are getting hotter, but we can redesign them to keep us cool 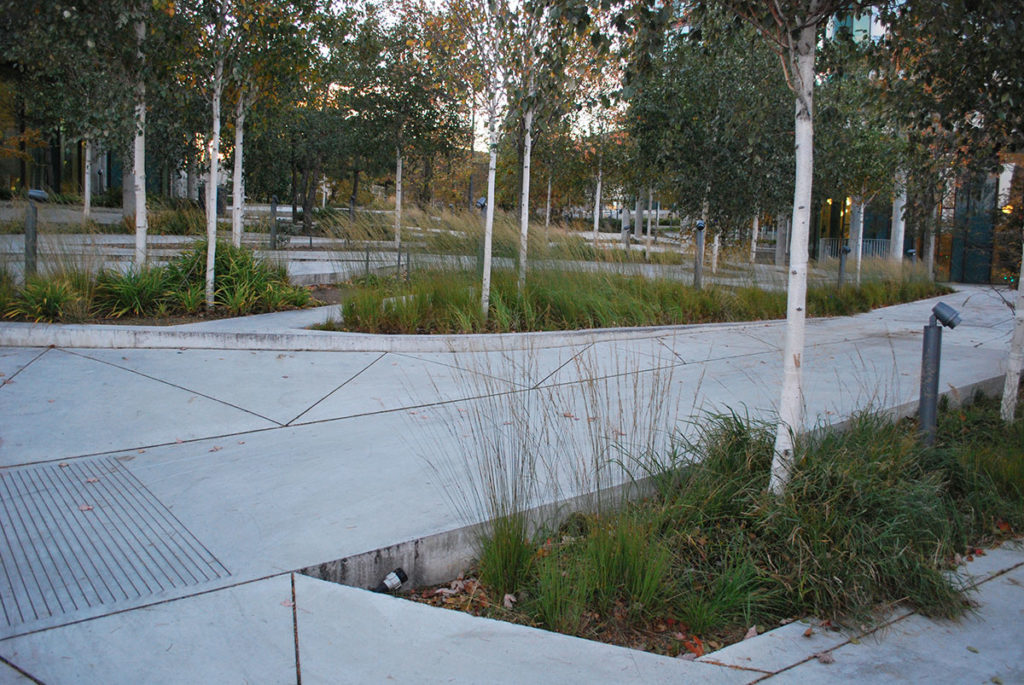