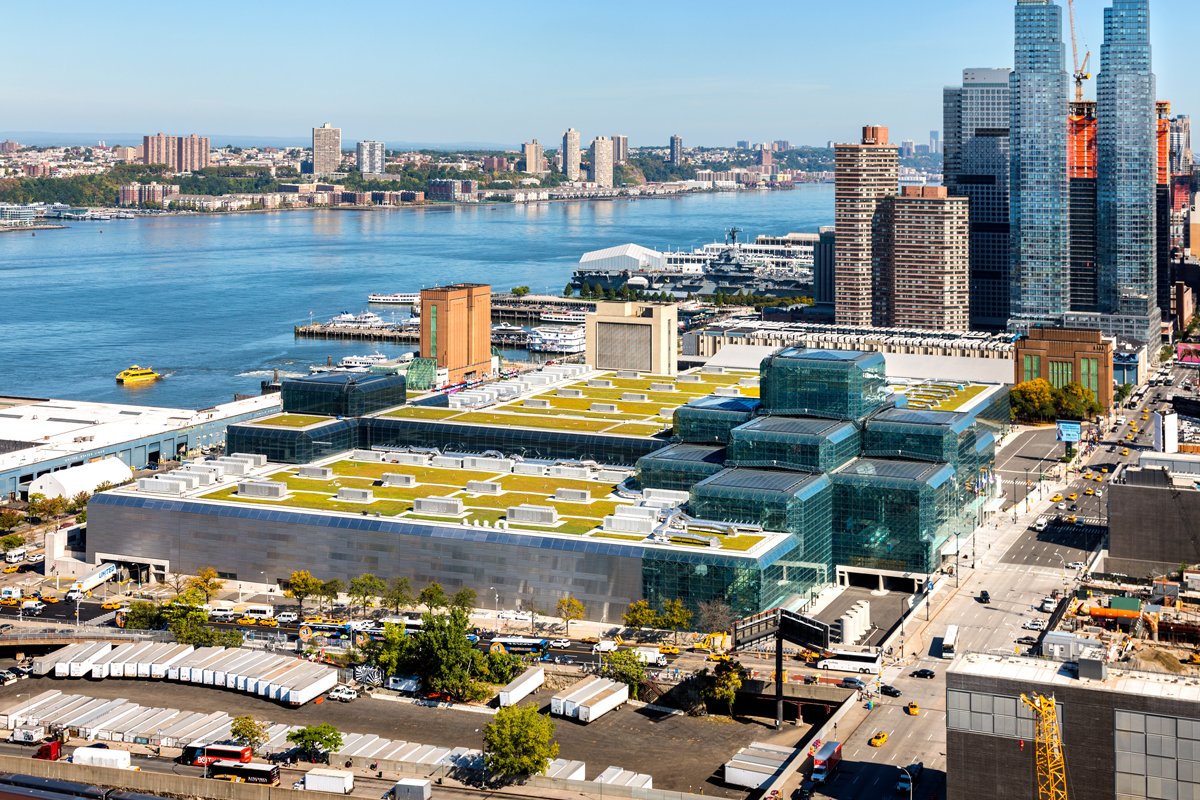 With 840,000 gross square feet of exhibit space, the Javits Center – Marketplace for the World® – is New York City’s largest venue for conventions, trade shows and special events. The Javits Center hosts over 150 events annually with an average attendance of 2.5 million per year. Designed in 1986 by I. M. Pei, the iconic facility embarked in 2010 on a major renovation project that includes a new roof, re-doing the building’s signature curtain wall with high-performance, bird-safe glass, upgrades to the mechanical and electrical systems, and interior reconfigurations to enhance the visitor experience as well as boost operational efficiency.

The Jacob K. Javits Convention Center installed over 100 energy-efficient HVAC units, new energy-efficient lighting and new recycling containers throughout the facility. They also invested in a cutting-edge energy dashboard that allows designated engineers and employees to monitor consumption levels for electric, gas and water. With all of these new initiatives, the Center achieved LEED Silver certification by meeting the goal of exceeding New York State’s mandate of reducing energy and water consumption by 20% by the year 2020. The new bird-friendly pixelated glass panels have reduced bird collisions by 90% since installation.

Early on in project planning, concrete pavers or a green roof were considered as alternatives for a protective element for the new roof. However, the weight of pavers would have required a structural upgrade to the roof to support their weight load. Moreover, according to Nancy Czesak, First Vice President of Tishman Construction and Co-Project Director, incorporating a lightweight green roof was also the preferred alternative because it would contribute to the goal of earning LEED® (Leadership in Energy and Environmental Design) Silver status.

The benefits of installing a green roof at the Javits Center include the reduction of storm runoff volume and peak flow. It conserves energy by moderating temperatures on the roof and lowering the temperature of the air being drawn into the rooftop HVAC units during cooling season, while simultaneously helping to reduce temperature extremes inside the building. Re-cladding the building with high-performance glass, upgrading the control systems and the lighting fixtures, and adding a green roof achieve an estimated 26 percent reduction in the Javits Center’s energy use. The green roof will also extend the service life of the new structural roof system by serving as a shield to prevent UV radiation and temperature extremes from degrading roof components and by protecting them against damage from airborne debris.

From a design perspective, a green roof was desirable because taller buildings were on the drawing boards for the area, making the Javits’ crown an essential element of its exterior aspect. Bruce S. Fowle, FAIA, LEED, Founding Principal, FXFOWLE Architects, noted that the green roof adds the aesthetic value of urban open space – the fifth façade of the building that will be seen and appreciated from adjacent high-rises that are planned for construction. In particular, it provides a pleasing, expansive view of green space from nearby residential towers.

Commercial Roofing Solutions (CRS), Inc. of Clifton, NJ, was the project’s waterproofing consultant. According to Rainer Gerbatsch, President of CRS, Inc., lightweight when fully saturated was a basic requirement of all the green roof systems considered. CRS and FXFOWLE Epstein of New York, NY, the architects for the renovation project, recommended and specified the Xero Flor Green Roof System based on several factors:

– Proven Performance: “Xero Flor has a long-standing record of reliability spanning several decades in Europe and has been proven in previous large-scale projects in the U.S.,” explained Gerbatsch.
– Scientific Validation: The system has independent laboratory certification of its wind uplift performance and resistance against combustibility.
– Vegetative Mat Design: Xero Flor pre-vegetated mats, the retention fleece layer, drain mats and root barriers are permanent and do not decompose over time. Thus, sections can be rolled back if roof maintenance is necessary.
– Green Roof Plant Variety: The vegetative mats for the Javits green roof include 14 different varieties of Sedum. Greater plant variety than in other lightweight green roof systems promotes diversity and sustainability.
– Climate-adapted Plants: The vegetative mats for the project were grown for a full 9-12 months at a farm in upstate New York and were adapted to the regional climate.

The Javits Center green roof installation was officially completed in October 2014 and measures 297,000 sf, which is the second largest green roof on a single, free-standing building in the U.S. The largest, at Ford Motor Company’s River Rouge Plant, which reached the milestone of its tenth anniversary in 2013, is also a Xeroflor installation.

The Jacob K. Javits Convention Center green roof is the most studied in the city.

In the spring and summer of 2014, 11 species of birds – for a total of 524 – were spotted on the Javits Center green roof during a study conducted by the Audubon Society and Fordham University. Canada geese, American Kestrels, herring gulls, great black-backed gulls, rock pigeons, mourning doves, fish crows, barn swallows, northern mockingbirds, European swallows and house swallows have all been spotted around the 6.75-acre center, according to the New York Convention Center Operation Corporation.

In 2017, three honeybee hives were installed on the south part of the Javits Center green roof. Because honey bees will travel two to three miles to forage, it is assumed that they are feeding from the green roof, in addition to the nearby High Line and Hudson River Park.

“We harvested our own honey for the first time in 2017, producing more than 250 ounces from the bee hives we installed on our green roof. Called Jacob’s Honey, the honey has been incorporated into a new salad dressing now available at the Taste NY Bistro Level 2.” The Javits Center, Sustainability

Monitored by the New York City Audubon, by 2017 the living roof was nurturing 26 different species of bird life, five bat species and thousands of honey bees in hives.

In an October 2018 paper published by The Cooper Union for the Advancement of Science and Art Professor Joseph Cataldo and his team, the authors concluded the average amount of rainwater retained on the green roof is 77%.

“This particular green roof appears to be more than 18 times as cost-effective as a subsurface cistern would be for managing an equivalent volume of stormwater in Midtown Manhattan.” ~ 2018, The Cooper Union for the Advancement of Science and Art

The Jacob K. Javits Convention Center is the crown jewel of the pulsating, resurgent new West Side neighborhood—now transformed with the Hudson River Park, Hudson Yards and the recently expanded section of the High Line. The Javits Center green roof has become a sanctuary for area wildlife while helping to reduce energy consumption throughout the convention center. With a historic expansion project underway, it’s preparing to host an even wider variety of events in the years to come, attracting new generations of visitors to Manhattan’s West Side.