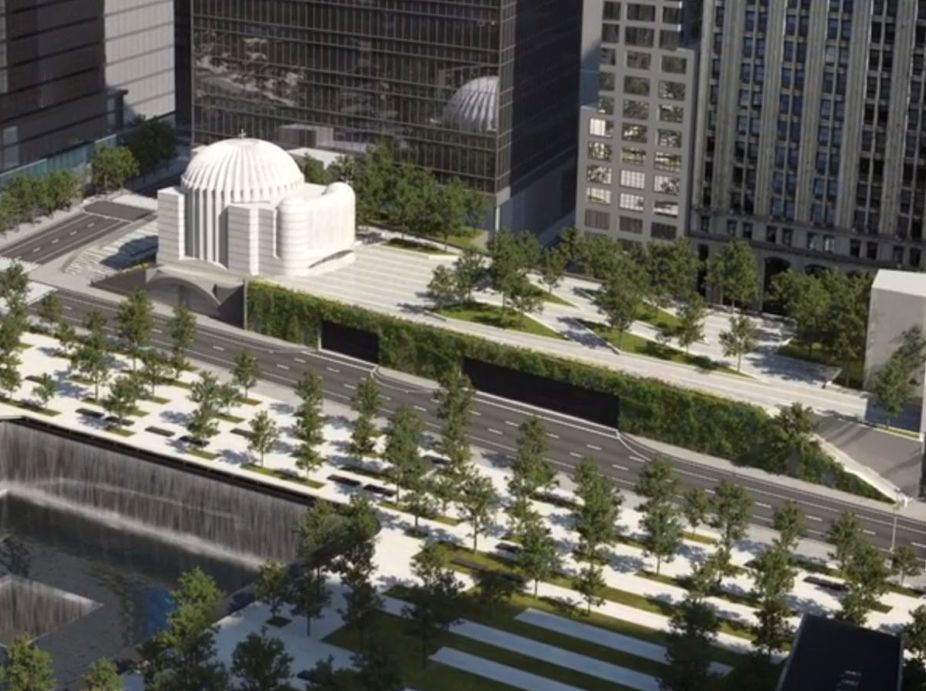 Opening almost 15 years after 9/11 on June 29, 2016, the $50 million World Trade Center’s Liberty Park is an elevated, one-acre linear park (inspired by the nearby iconic High Line) built on top of a vehicular security-screening center overlooking the original footprint of the World Trade Center, now the National September 11th Memorial. Designed for the Port Authority of New York and New Jersey by landscape architect Joseph E. Brown, the park features many trees, shrubs, perennials and unique seating that provides a place for visitors to reflect, relax and recharge amidst the bustling city.

Designed by Santiago Calatrava, the future St. Nicholas Greek Orthodox National Shrine surrounds Liberty Park and is a modern evolution of the Byzantine style church with a dome, still under construction. Liberty Park has a capacity of 750 people and is open to the public from 6 a.m. to 11 p.m. every day. “Liberty Park also serves as a green roof and demonstrates several other sustainable features including LED lighting plus guardrails and benches fashioned from reclaimed teakwood,” (Port Authority of New York and New Jersey).

One of the park’s most striking features is the multi-hued 25 feet high and 336 feet long G-O2(R) Living Wall by Plant Connection that transforms the prosaic walls and garage entrances leading to the network of underground roadways and loading docks. The living wall plantings were designed in a staggered, horizontal grid to complement the 9/11 Memorial. The broad bands of color also help soften the scale and facade of the building along Liberty Street.

This notable accomplishment comes after three years of intensive planning, designing, engineering, and coordinating with a multidisciplinary team of architects, landscape architects, designers, horticulturists, engineers, and contractors. Collectively, they have transformed the site that was once the Deutsche Bank building into a meaningful and memorable space where life and greenery symbolize the rebirth of Lower Manhattan – while always remembering the past.

The Port Authority of New York and New Jersey, 2016, see below, says: “Creative vertical gardening is transforming what otherwise would be the prosaic walls of the Vehicle Security Center into green space for New Yorkers and visitors to the World Trade Center,” said Pat Foye, Executive Director of the Port Authority.

And “The Living Wall provides a green space that symbolizes the resiliency of New Yorkers, the vibrancy of Lower Manhattan and its connection to the Memorial Plaza,” said Steve Plate, Port Authority Chief of Major Capital Projects.

The Liberty Park G-O2(R) Living Wall, like all of Plant Connection’s G-O2(R) Living Walls, was pre-grown before it was installed, ensuring that the roots anchored into the panels and media before hanging vertically. Beginning in 2015, the planted panels were grown at Plant Connection’s nursery in Riverhead, NY, where they were monitored and maintained by horticulturists in an optimum greenhouse growing environment.

One retired 9/11 NYPD officer expressed their feelings after seeing the living wall coverage: “Thank you, Melissa, for your hard work, on behalf of our fallen brothers and sisters. It is nice to see that people haven’t forgotten. I would love to see this before I pass. Unfortunately, the pain is still too great to go there. You are bringing such beauty to this solemn place. Again, thank you. Your work is very much appreciated.”

The Liberty Park G-O2(R) Living Wall offers a touch of earth amid a concrete jungle – and what better place to provide a piece of serenity and enhance the environment. The G-O2(R) Living Wall at Liberty Park pushes aside boundaries and invites people to come together from all walks of life to simply breathe fresh air and enjoy the newfound beauty.

“In addition to the wall, the park also features the Horse Soldier statue in honor of the troops who served in Afghanistan during Operation Enduring Freedom; a descendant of Anne Frank’s famous Horse Chestnut Tree, and more than 150 trees and shrubs. Construction of the Greek Orthodox Church continues on the park and will serve as both a church and bereavement center. The southwest corner of the park will feature the Liberty Street pedestrian bridge that crosses over West Street to Brookfield Place in Battery Park City,” (The Port Authority of New York and New Jersey, 2016).