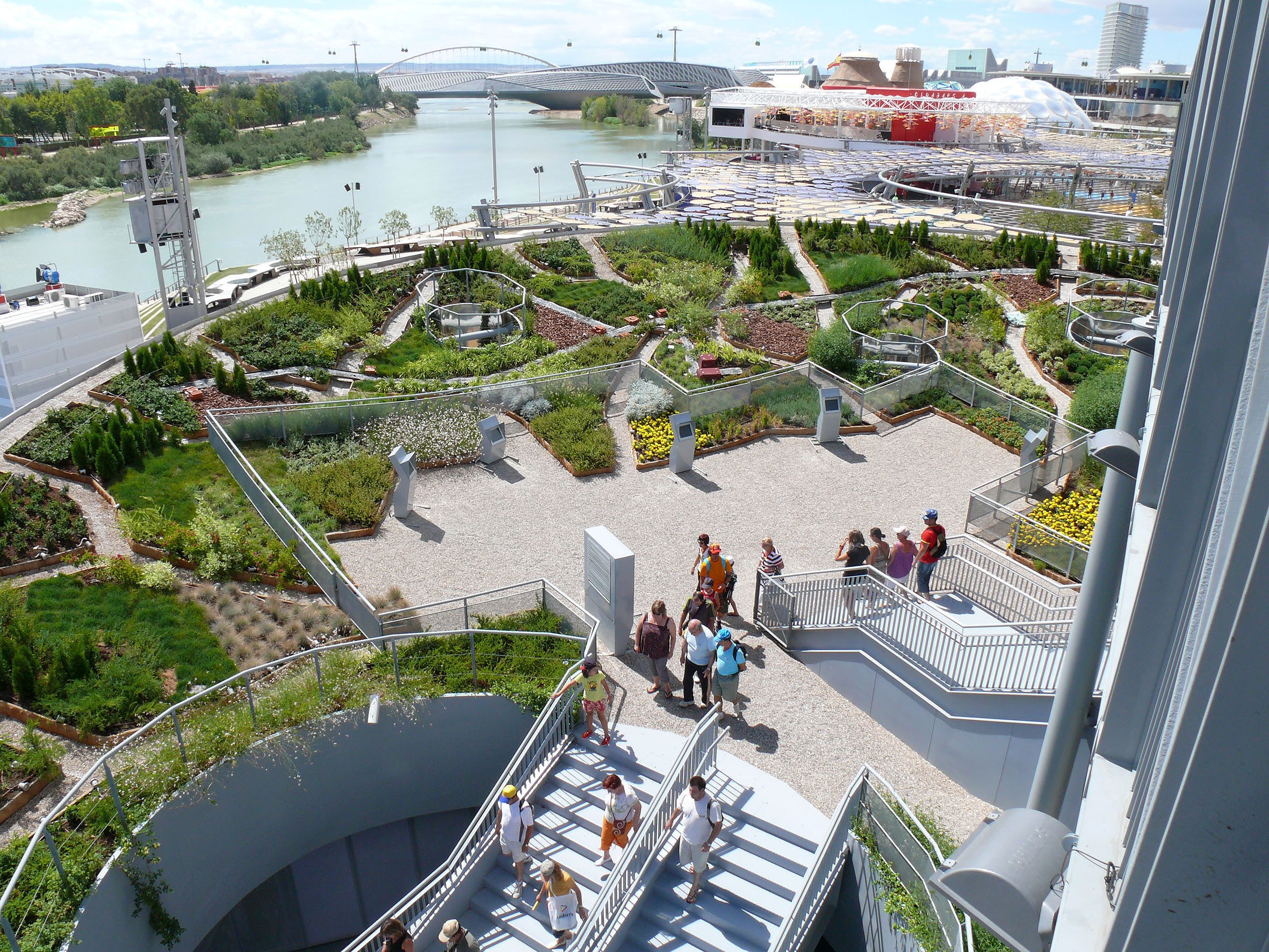 The World Expo Zaragoza 2008 was highlighted for the month of September in the 2009 Greenroofs of the World Calendar.

Read a detailed case study of the World Expo Zaragoza 2008 from ZinCo in German here.

The World Expo Zaragoza 2008 was held from June 14 – September 14, 2008 in Zaragoza, Spain. The theme of the international exposition was “Water and Sustainable Development” and architects and designers from around the world were called to build forward-thinking structures centered around these themes. A short walk from the city’s center, the 57-acre site is located within the Ranillas Meander along the Ebro River, just west of Zaragoza.

Coordinated by the Bureau of International Expositions, the organizing institution was in charge of designing Zaragoza’s International Exhibition 2008 and building the participants’ pavilions. These buildings were designed with organic shapes and it was decided to have a huge green roof which also included a photovoltaic panel system. The Expo’s landscape architect and planner says, “We were dealing with a surface of 43.172 sq meters to be covered with vegetal elements as well as gravel and wood paths. Only 11.172 sq meters out of the total surface are viable for pedestrian use due to structural requirements and building time restrictions,” (IGRC 2009).

Carlos Avila Calzada, Head of the Landscape Department for the Expo Zaragoza 2008 said, “Regarding the green roof structure it was decided to choose a ZinCo system with a 25 cm thick topsoil layer, formed by a light substrate. When designing the green roof we set three main objectives: choosing a design that would provide a global idea of all the pavilions’ roofs, creating a green structure which would show a vivid contrast between a neutral background and large colourful areas and incorporating the photovoltaic panels in the design. The walking area has different characteristics as there are wooden paths and spaces for the visitors to sit down and enjoy the view over the exhibition site or the rest of the city. These areas, equipped with furniture and lighting, resemble those of public use in cities more than a green roof,” (International Green Roof Congress 2009).

The Expo Zaragoza 2008 utilized over a total of 765,000 sf of ZinCo green roof systems within two areas: the “Pabellones de las Naciones” or Pavilions of the Nations, and “Aguas Compartidas,” or Shared Water. Covering 754,000 sf, the Pavilions of the Nations represented an “imposing environmental responsibility for stormwater management.” Various types of water distribution found in nature are displayed here meandering through the looping rooftop landscape gardens which recreate different climatic zones and lead visitors along the constructed river. ZinCo’s intensive ‘Perennial Garden’ system was used to provide beautiful plantings and for recreational areas that could be enjoyed in daily life.

The design intent of the 11,000 sf landscaped pitch roof of Pavilion No. 6, the Shared Water Pavilion, was to show the potential for fair distribution of water across the region. Rainwater was collected and used for irrigation of the vegetated roof which has varying slopes up to 18 degrees.

After the World Exhibition closed in mid September, 2008, the Expo installations were converted into a 160,000 square meter business park named Zentro Expo Zaragoza with the aim to create a variety of flexible and luminous office spaces along side an entertainment complex for citizens and visitors to enjoy. An institute for the study of climate change is also onsite.