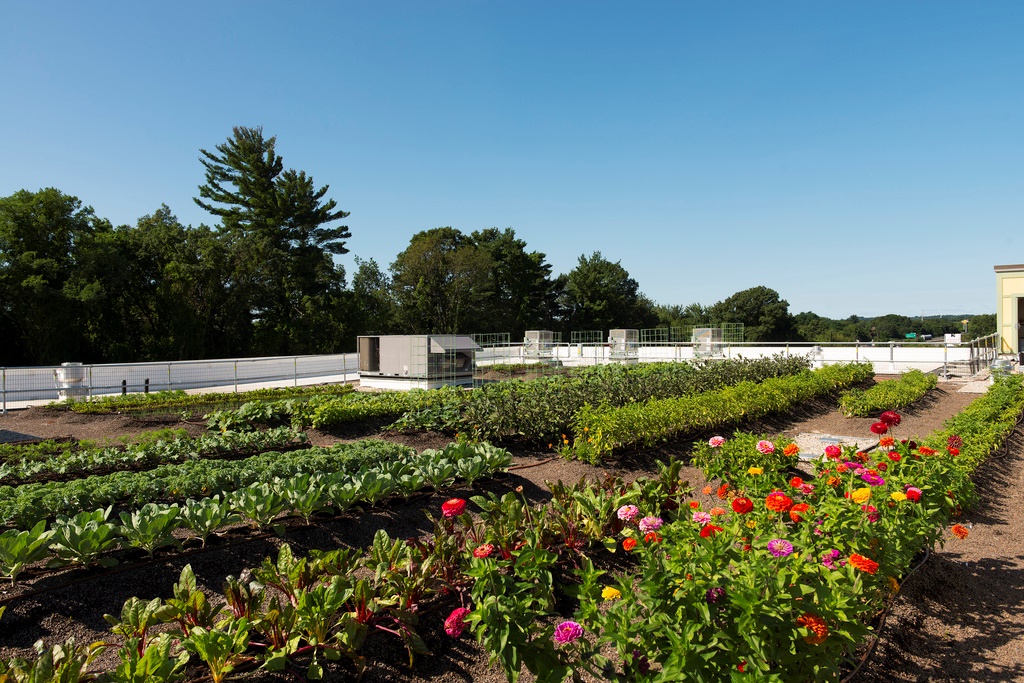 For more information on this project, contact Kevin Kacamburas, Architectural Designer, JACOBS at: Kevin.Kacamburas@jacobs.com and Recover Green Roofs at: info@recovergreenroofs.com.

Learn about the following companies in The Greenroofs.com Directory: American Hydrotech and Recover Green Roofs, LLC.

November 2014 Rooftop Gardening at WholeFoods in Lynnfield by Jeff Harder in Northshore Magazine; June 3, 2013 Whole Foods Market will grow produce on roof by Erin Ailworth in the BostonGlobe.com; and Lynnfield: The Rooftop Farming Movement by Dan Chamberlain from Green City Growers.

Situated two flights of stairs above the produce section, the food roof was designed and constructed by Recover Green Roofs, LLC and all locally sourced materials were used. Maintained by Green City Growers, the Whole Foods green roof provides an estimated 11,000 lbs of hyper-local produce per year which is then sold inside the store. In the first year, crops such as herbs, leafy greens, fruits and root plants were brought in from local farms and planted on the roof. Crops have since included tomatoes, turnips, eggplant, purple and orange carrots, cucumbers, radishes, jalapeños, Italian red peppers, banana peppers, zucchini, mint, and much more alongside purple lavender, orange chrysanthemums, and other blooms.

The plant varieties are determined in collaboration with the Whole Foods Lynnfield produce department, and Green City Growers assembles a crop map by season. In 2016 Recover Green Roofs installed a hoop house on the food roof to start from seed on site. Currently kale is being grown, and there are plans for more hoop houses in the future. All produce from the food roof is grown using all organic farming methods.

A Hydrotech root stop was put directly on top of the TPO roofing membrane. A moisture mat was rolled on top of that followed by a drainage board. The drainage board was filled with aggregate to increase water retention and compressive strength. Filter fabric was then rolled out to contain all of the media. 10″ planting mounds of lightweight growing media were then laid in 3′ wide rows.

A Rain Bird drip irrigation system delivers water directly to the roots, minimizing waste. The irrigation was set up in zones to allow for specific watering needs of the varying plants and vegetables. “The Rain Bird irrigation system will measure temperature, humidity, solar exposure, and wind. These metrics will detect the rate of evapotranspiration and will schedule irrigation accordingly. Recover installed a 42″ ballasted Guardian railing system around the perimeter of the rooftop farm that meets all OSHA standards without any mechanical fastenings,” (Recover Green Roofs).

“I was sitting at a table during the design phase with about a dozen architects and engineers, and they were all telling Whole Foods not to build the rooftop farm. Whole Foods did not falter, finding a solution for every problem and making the rooftop farm a reality. The green roof industry is grateful for visionary clients like Whole Foods who are willing to take risks and invest in new green technologies. Recover is grateful for their business and their leadership.” ~ Mark Winterer, Director of Operations, Recover Green Roofs, LLC

In addition to supplying the Whole Foods Market Lynnfield produce section itself, vegetables have been also key ingredients in Whole Foods’ pizzas and other prepared foods. By all accounts the food roof has been a resounding success: Customers love the fresh, local produce and area chefs have designed special seasonal menus using the open air rooftop farm’s wide variety of fruits, vegetables, herbs, and flowers.

“The produce we get is more nutrient dense and fresher than anything else available, because the distance between where it’s grown and where it’s being consumed is really as minimal as it can be.” ~ Jessie Benhazl, CEO of Green City Growers