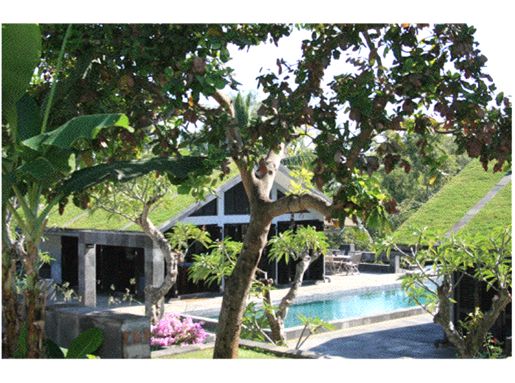 Bali, the famous tourist destination in southeastern Asia, is suffering from a lack of sufficient electricity and water deficiency. Electricity cuts for the local populace are the order of the day. The government of Bali together with PLN, the state electricity company, focus on supplying electricity to areas frequented by tourists, or regions with an increasing expatriate populace. Villa Santai is in the hills behind Lovina, North Bali, in a region that is notorious for the scarcity of its water in the dry season, beginning in May/June until October. Water is available from mountain springs or rivers originating from Lake Berantan, one of three lakes in the mountains; Lake Berantan is the origin of the water for the springs in this region. The lake?s water table is steadily sinking (3 m in the past years) and already over 60% of the natural springs are now dry. Along the coastal areas the water is pumped up from the ground water table.Two factors are the driving force behind the design of Villa Santai: an insufficient supply of electricity and dwindling water resources are compounded by the fact that the economy of Bali is geared to and dependant upon the income from tourists and the growing population of expatriates looking for a slice of ?that tropical island? to retire. Projects to introduce changes in the usage of energy, water resources and waste management, etc., are dependent on private initiatives.

The concept for Villa Santai (santai = relax in Indonesian) was to build an environmentally friendly villa, reducing the need for electricity using green lawn roofs, as well as to conserve and retain water. Victor Sinclair, the self taught architect and designer for the villa complex, has worked in Indonesia since 1993 and lived in the North of Bali since 2005. The villa is specifically designed for the generation of British expatriate ?baby boomers? the economy is increasingly dependent on, those who are aware of the global climate crisis and are willing to set examples for environmentally friendly building concepts. Started in January 2007, the project is 80% finished; the main building remains to be built, all cables and piping are laid including over 2km of data and electrical cable for a CCTV camera system.The villa complex is built on 3.600 m2 comprising three buildings which are built into the side of a mountain on a fifty ? gradient, which was terraced into 14 separate levels; by moving the earth four separate levels were achieved. The green lawn roofs are pitched at 35 ?, the roofs are made of 12 cm steel re-enforced concrete and combined have a total of 615 m2. The top surface of the concrete was given a thin 1/2cm layer of cement and ?painted over? with a cement water sealer for swimming pools. Lava rocks averaging in size 6 – 8cm x 8 ? 10cm are placed at 30 cm distances from each other over the surface; on the ridge of the roof is water piping for the sprinkler systems. Along the lengths of the roofs at appromixately 1m apart are 10 cm high and 2 cm wide earth and drainage barriers also cut from lava rock; the roofs were then covered with 10 cm of earth. A grass lawn with short roots was then planted over the earth. The owner (and designer) is looking for interested investors to complete the project with the possibility of installing solar panels.