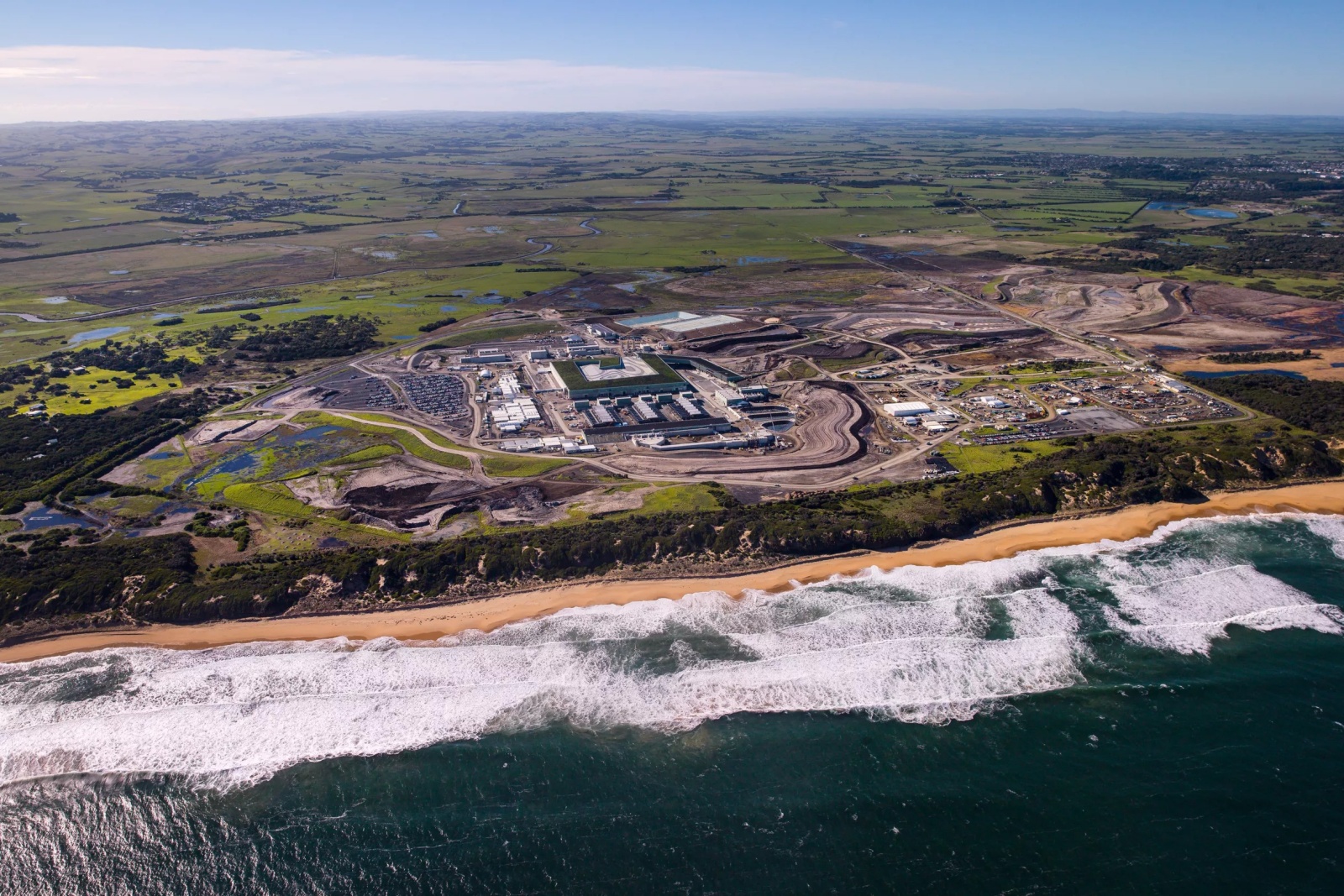 Learn about Sika Sarnafil and Fytogreen Australia in the Greenroofs.com Directory.

A private/public partnership between Victorian Government and Aquasure, the Victorian Desalination Plant (VDP)  represents the largest public sector investment in water infrastructure in Australia’s history. Using reverse osmosis technology to separate salt from seawater to create high quality drinking water, the project underpins water security for Melbourne and surrounding regions. As of March 2021, “More than 300 gigalitres of desalinated water has been produced and delivered to the Melbourne system since the first order for water from the desalination plant was placed in 2016,” (Melbourne Water).

The treated water is supplied to Melbourne’s water supply system via an 84-km underground pipeline to connect the plant to a transfer main at Berwick and then to Cardinia Reservoir.

“Located in Wonthaggi, the Victorian Desalination Plant comprises 29 buildings including the reverse osmosis building, the heart of the VDP. The plant has a guaranteed production capacity of 150 billion litres of water a year and the capability to expand to 200 billion litres a year – enough to fill 178 Olympic size swimming pools every single day!

As a rainfall-independent source of water it complements our existing catchments. With key components of the plant having a design life of 100 years it can produce high quality water whenever required, making it a resource that will be valued in times of future drought.” ~ Aquasure

The Australian Department of Environment of Land, Water and Planning manages the contract with the plant’s operator, Aquasure. The plant’s power requirements are 100% offset by renewable energy.

According to ARM Architecture, desalination plants need to be near the ocean and as close as possible to sea level to minimize the expense of pumping water vertically. The plant is 6.5 m above sea level, safely above the local flood level.

“We discovered that what looked like pristine coastal landscape was actually man made. There should naturally have been three main dune systems along the beach but the secondary and tertiary dunes had been swept away by pasture in the area’s previous life as farmland.

Since the dunes were missing, we surrounded the plant with new ones to help conceal it visually and acoustically. The new dunes are built from spoil excavated to make the plant’s platform and to hollow out the 4 km of tunnels that take water in and out. Reusing the spoil avoided the need to dispose of it elsewhere.” ~ ARM Architecture

Victoria’s new multi-award winning desalination project is covered with a living tapestry of indigenous plants that reflect the changing seasons and environment. Minimising its ecological impacts and actively enhancing the local environment, 225 hectares of the 263 hectare site will become a re-vegetated native parkland. The vegetation on the living roof reflects this commitment.

The Victorian Desalination Plant design brief was to replicate what would have been growing there prior to human habitation. Being an ecologically sensitive coastal area, the brief from the client was to minimize the visual impact of Australia’s largest municipal water treatment plant.

“The Victorian Desalination Project and Ecological Reserve is critical infrastructure for climate adaption and one of the largest such investments in Australia’s history. The 225 ha Ecological Reserve camouflages the Plant through a 26000m2 green roof and a dune system evolved from spoil, transforms degraded land into mosaics of coastal and swampy woodlands, wetlands and dune ecologies, reconnects remnants and provides rich visitor experience.” ~ ASPECT Studios

The thin-profile green roof, requiring just a few inches of media, incorporates patterns using a rich palette of indigenous vegetation tolerant of high heat, salt drift, drought and wind. Located in a revegetated coastal park, the desalination plant required a design which made the structure barely visible from all public viewing points. The green roof helps to integrate the building into the environment and enables the continued biodiversity of the site in its regeneration, acoustic moderation and stormwater management.

The green roof provides thermal and acoustic insulation for the plant as the pumps are very loud and disguises the larger buildings into the landscape, particularly when viewed from the Bass Highway.

Beneath the green roof are offices, the control centre, a water-testing laboratory, visitor facilities and amenities for staff. The size of this roof garden makes it the largest green roof in the southern hemisphere. Around 110,000 tube stocks of indigenous ground covers, sedges, lilies, succulents and non-wood shrubs were used, 25 species in all. All species selected were native and indigenous to the area. Download the Plant Species Fact Sheet with Green Roof plants on page 6 from Aquasure.

The Victorian Desalination Plant Ecological Reserve is open to the public. Amenities within the ecological reserve include 8km of pedestrian, cyclist and equestrian trails; wayfinding and interpretation including indigenous history of the Bunurong/Boon wurrung people of the Kulin nation, their uses of the land and the effects of European settlement; boardwalks for discovering bird hides; viewing decks; and picnic shelters. Download the Victorian Desalination Plant Ecological Reserve Trails Map.

The total roof garden area totaling over 26,000m2 is split between three buildings, and the green roof slopes vary considerably, from 1 – 22%. Designer and installer Fytogreen maintained several test beds at various slopes during the research phase to test appropriate plants for wind and vegetation type. The Victorian Desalination Plant incorporates harvested stormwater for irrigation to make a successful green roof on the 180mm soil profile. Its high performance, low organic, mineral based soil mixture provides the best growing conditions for the plants and a soil mixture that is durable with minimal breakdown.

Geoff Heard of Fytogreen, the Victorian Desalination Plant green roof builder and designer, says the site and scale of the roof presented a number of challenges. “Weather hampering construction, design modifications to comply with the 1-in-100-year wind storm event for stability and the lack of pre-existing green roof standards for Australia were all major considerations.”

“The waterproofing membrane had to allow for potential movement from kilometres of joints, for which the Sika Sarnafil ‘G series’ polymeric sheet is ideally suited,” continued Heard. “UV resistance was also required for a 25-year life span. And compatibility with the electronic ILD (international leak detection) system was paramount to enable quality checks to occur prior to Sika’s handover to Fytogreen and after Fytogreen had completed its construction.” ~ Sustainability Matters

The Victorian Desalination project was monitored on wind, plant establishment, and drought impact by Fytogreen for the first two years after completion.

“The successful use of these particular indigenous species lies not in the assessment of each species in isolation for suitability for green roof use, rather in the ecological functioning of all plant species in unison. Dominances, reductions and re-colonisation, are providing coping mechanisms to a plethora of exposure challenges, and are integral to this Australian green roof design solution.

The quality of the design has been commended by the Victorian State Architects office, DSE and other government entities. A mandated 18 year review ensures ecological values are maintained into the future.

“Victoria’s Desalination Plant is a project of formidable scale. Part water treatment infrastructure, part environmental restoration, it is in many ways a very large piece of worthy and valuable infrastructure.

The ultimate in land shaping, the design reflects the local coastal dune topography as it re-sculpts the landscape to hide the massive desalination plant. The designers have deftly managed to shield and focus views, folding the infrastructure into the landscape and wrapping it in a fresh skin of nature. They exhibit impressive skill in shaping the experience from both land and air.” ~ 2016 AILA National Award for Infrastructure Victorian Desalination Plant and Ecological Reserve