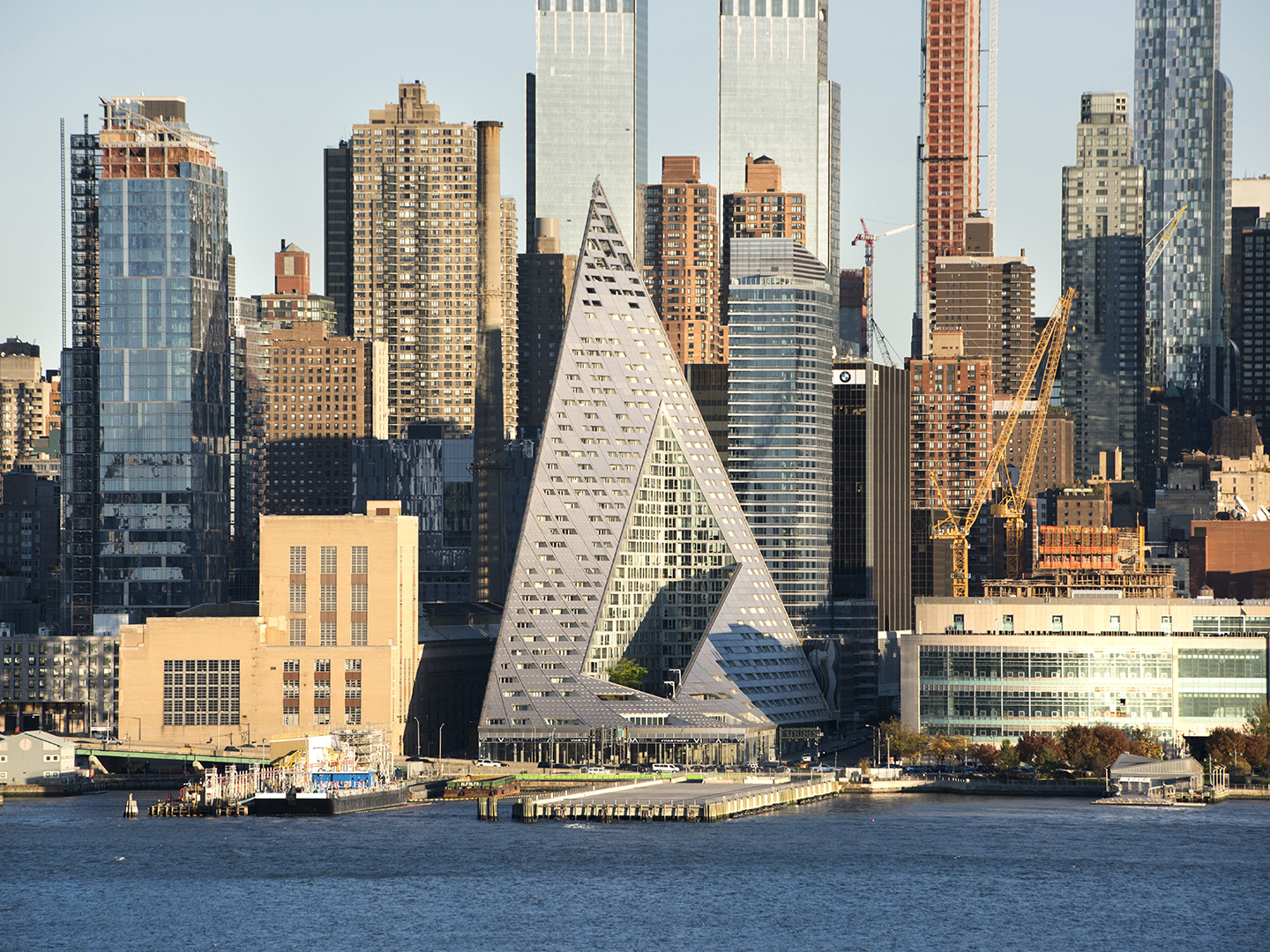 September 24, 2018 Greenroofs.com Featured Project: VIA 57 West by Linda Velazquez; Spring 2017 VIA 57 West in Metals in Construction.

Comprised of VIA, FRANK and Helena, the 57 WEST Superblock is an oasis in one of New York’s most vibrant neighborhoods. Each building is constructed with a vision of sustainability that both respects nature and promotes well-being giving back to the environment and providing a home where residents live well and thrive. Extensive amenities and curated events and activities exclusive to 57 WEST residents are designed to enhance the urban lifestyle. 57 WEST offers a variety of premium layouts and finishes, many with inspiring city and Hudson River views.

Located at 57th Street on Manhattan’s West Side towards the Hudson River, VIA 57 WEST is touted as redefining green living with a vision of sustainability that both respects nature and promotes well being. Its paradigm for environmental responsibility is centered around the four core elements —Water, Energy, Air, and Earth, and VIA 57 WEST gives back to the environment and provides a home where people live well and thrive. Woven throughout the building and integral to its residences, sustainability is part of VIA 57 WEST’s DNA.  For example, the energy-efficient building recycles 60,000 gallons of water per day, in addition to using responsibly-sourced wood and boasting its glorious landscaped courtyard.

Designed by Bjarke Ingels Group (BIG), the 35-floor VIA 57 West is the Danish firm’s first completed project in the U.S.; construction commenced in 2013 and was completed in August 2016.  A hybrid between the European perimeter block and a traditional Manhattan high-rise, VIA 57 West combines the advantages of both typologies: the compactness and efficiency of a courtyard building with the airiness and the expansive views of a skyscraper. By keeping three corners of the block low and lifting the north-east corner up towards its 450 ft peak, the courtyard opens views towards the Hudson River, bringing low western sun deep into the block and graciously preserving the adjacent Helena Tower’s views of the river.

The form of the 77,202 m² building shifts depending on the viewer’s vantage point. While appearing like a pyramid from the West-Side-Highway, it turns into a dramatic glass spire from West 58th Street. The courtyard, which is inspired by the classic Copenhagen urban oasis, can be seen from the street and serves to extend the adjacent greenery of the Hudson River Park into VIA. The slope of the building allows for a transition in scale between the low-rise structures to the south and the high-rise residential towers to the north and west of the site. The highly visible sloping roof consists of a simple ruled surface perforated by terraces – each one unique and south-facing. The fishbone pattern of the walls are also reflected in its elevations. Every apartment gets a bay window to amplify the benefits of the generous view and balconies which encourage interaction between residents and passers-by.

“Thanks to its shape, it has no real roof, but instead a three-sided façade that at its most dramatic angle, facing the water, warps into a hyperbolic paraboloid, a double-curvature that slopes toward the ground. To the north and east, the façade is composed of an undulating exterior wall with high-performance glass and aluminum spandrel panels, which transition into a stainless steel curtain wall skin on the sloped portion of the façade.” ~ Metals in Construction, 2017

The base of VIA 57 West contains 45,000 square feet of world-class retail with one story below.  At the heart of the building, landscape architecture firm Starr Whitehouse designed the open air 22,000 sf greenroof courtyard, also known as VIA GARDEN, on top of the retail space as a private yet communal respite for its residents. The design shares the exact proportions as Olmsted’s Central Park planted with 47 species of native plant material including over 80 trees and lawn areas.

The courtyard at VIA 57 West is a park within a pyramid—a space that works in concert and in contrast with the building that surrounds it. The design invites visitors to hike a transect of the Hudson River Valley, passing through three local habitats along the way. Starting in a grove of fern and birch, the path meanders up one story, taking the traveler into a plaza that recalls a forest glade. Crossing through a fog feature whose mists invoke low-hanging mountain clouds, the path climbs a flight of stairs to arrive on a platform overlooking the Hudson. At this rocky summit, visitors can barbecue, enjoy the view, or sunbathe on a grassy knoll beneath a honey locust, surrounded by sumac, pine, and meadow grasses.

The three zones of the design are shaped by principles taken from Central Park. Set below the grade of the surrounding landscape, the brick and corten path disappears behind each bend. The ripple pattern of the brick echoes the meander of the path, creating a single fluid motion out of repetition.

As the traveler walks along it, the path creates new views, adding to the sense of immersion in the landscape. These principles define a space that is separate but receptive to the architectural frame: the park receives light generously provided by the building’s lowered southwest corner, and in return, its path reaches into the structure, connecting to internal arteries and chambers in a symbiotic dialogue of space.

The single-source greenroof system chosen for Via 57 West is the Garden Roof Assembly® with Waterproofing Monolithic Membrane 6125® (MM6125®) from American Hydrotech.

“The building offers a unique vision for the future of the tall building; one that manages to synthesize high-quality and visually appealing architecture with the needs of the client, all without sacrificing environmental performance or residential quality.” ~ CTBUH

Built with an array of sustainable features and materials – not to mention stunning, unsurpassed vistas across the Hudson River and Manhattan – the spacious alfresco courtyard sky garden beckons to become a part of the engaging VIA 57 West community.