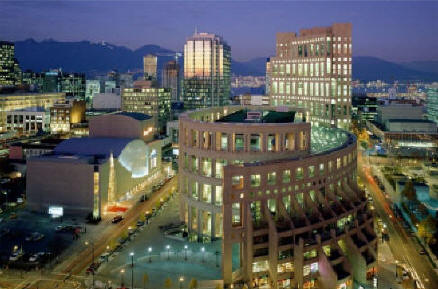 Read about plans to make the secluded greenroof open and accessible to the public in the June 7, 2017 Rooftop garden atop Vancouver Public Library opens in 2018 by Peter Meiszner; May 10, 2016 $15.5-million expansion, public rooftop garden planned for Vancouver Public Library by Kenneth Chan in VancityBuzz; and the July 24, 2006 A field waves on the Vancouver skyline by Brian Hutchinson in the National Post.

Learn about American Hydrotech in The Greenroof & Greenwall Directory. The Vancouver Public Library was featured in the Greenroofs.com 2008 Greenroofs & Walls of the World™ Calendar.

Funded by the City of Vancouver, architects Moshe Safdie, Richard Archambault and Barry Downs won the design competition for the Vancouver Public Library (VPL), which broke ground in February, 1993 and opened to the public in May, 1995. Library Square occupies a city block in the eastward expansion of downtown Vancouver and includes the iconic nine-story VPL Central Branch, Federal Government Office Tower and a retail/daycare complex.

Resembling the Colosseum in Rome, the Vancouver Public Library is a “rectangular box surrounded by a free-standing, elliptical, colonnaded wall featuring reading and study areas that are accessed by bridges spanning skylit light wells. The library’s internal glass facade overlooks an enclosed concourse formed by a second elliptical wall,” (Wikipedia). The floor to ceiling windows offer natural light and an almost 360 degree view of the surrounding city. The concourse serves as the main entrance to the library and holds special public events. Public parking area with over 700 parking spaces and several bicycle racks are located below ground.

Noted landscape architect Cornelia Oberlander, OC, FASLA, FCSLA, LMBCSLA, designed the semi-intensive greenroof on top of the Vancouver Public Library Central Branch. She worked with architect Moshe Safdie, and although designed for its CO2 benefits, this application is a prime example of some of the purely aesthetic benefits provided by the welcome visual relief for the many high-rise residential and commercial tower views. American Hydrotech supplied the waterproofing and greenroof system.

The 21-story Federal Tower, part of the library complex, overlooks the greenroof located on the ninth floor. Blue and green fescues (Festuca ovina glauca v. ‘Elijah Blue’ and (Festuca ovina glauca v. ‘Solling’) and kinnikinnick (Arctostaphphylos uva ursi), a native ground cover, were planted to represent the local Fraser River flowing through the mountains as it meanders through the Greater Vancouver Regional District.

According to the designer, “The planting reflects the changing patterns of light and shadow,” (Cantor, 2008). Over 16,000 grass plugs and 26,000 groundcovers were individually planted in sweeping curves within 14″ of growing media. Although this greenroof was installed with a low-intensity irrigation system (used the first year and weekly, during droughts), it does not require fertilization or cutting. The grasses are raked at the end of the winter. Japanese maples (Acer ‘Morgan’) were planted one story below on the 8th floor along an outdoor plaza, adding another layer of depth and creating an unforgettable partial ring of color that changes with the seasons. The greenroof is inaccessible to the general public.

Public Works and Government Services Canada (PWGS) initiated a study on Best Management Practices and Low Impact Development methods and partnered with Kerr Wood Leidal Associates Ltd. to conduct a year long monitoring project on the VPL green roof. The purpose of the project was to assess the performance of the greenroof during the rainy and dry seasons (saturated and nonsaturated conditions).

Renovation of the iconic 1995 Central Library by Moshe Safdie Architects, Cornelia Oberlander, and American Hydrotech, among others, is scheduled for completion in 2018. Opening the “Garden in the Sky” to the public for the first time, the new garden will sit at grade with the existing maples. The top 2 floors will consist of a reading room, community event space, theatre, and public garden. New features will include a gravel Zen Garden, flowering vines on a metal trellis over a glass canopy, roses, lavender, seating and walkways.