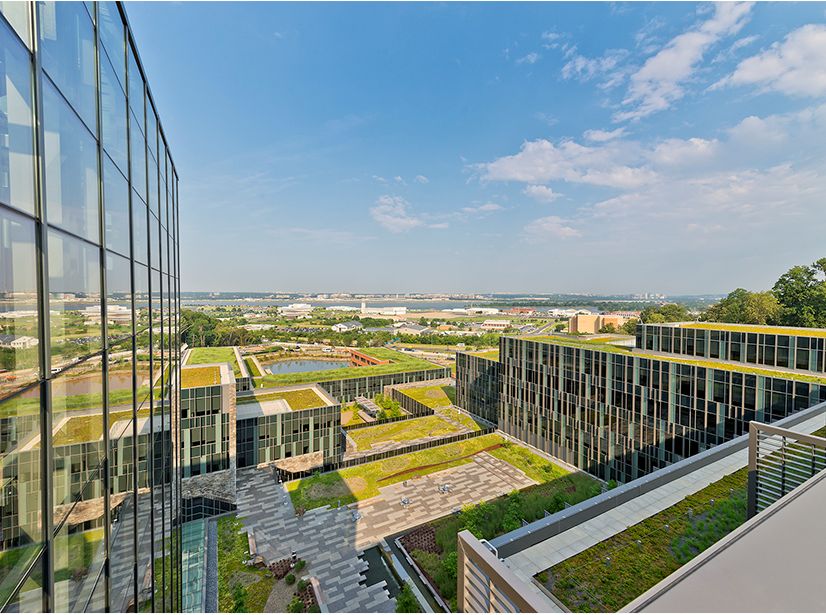 For further information, contact Todd Skopic of the Henry Company at: [email protected] and 410.960.3059; visit the Tilson Group at: www.tilsongroup.com.

Read about the following companies in The Greenroofs.com Directory: rooflite®; Emory Knoll Farms; and Stalite Environmental.

GSA; Clark Construction as well as here; GSA Sustainability Report of July 11, 2011; Perkins + Will; and Andropogon.

In an effort to provide a more unified, secure campus to bring together its executive leadership and operational management, the Department of Homeland Security (DHS) consolidated its headquarters in the National Capital Region at the 176-acre St. Elizabeths Campus. The multi-award winning United States Coast Guard Headquarters is the first project at the new DHS St. Elizabeths Campus and its portion alone involved the largest excavation project in D.C. history, creating 1.6 million cubic yards of dirt. While the U.S. Coast Guard is one of the five armed forces of the United States, it is the only military organization within the Department of Homeland Security.

On November 13, 2013 the U.S. Coast Guard renamed the building and dedicated their headquarters in Washington DC the “Douglas A. Munro Coast Guard Headquarters Building” by act of Congress. US Coast Guard Signalman First Class Douglas Albert Munro was posthumously awarded the Medal of Honor for bravery at Guadalcanal on September 27, 1942.

Formerly a government-run hospital for the insane which opened in 1855, the St. Elizabeths Hospital site is a National Historic Landmark. Located in the Anacostia neighborhood of southeast Washington, D.C., the new complex unites more than 40 buildings spread out within the area while honoring the natural and historic site. The largest construction project in the Washington, D.C. metropolitan area since the Pentagon was built during World War II, eventually up to 14,000 DHS employees will be working on site.

Phase 1 delivered in 2013, Phase 2 will deliver in 2014, and Phase 3 was completed in 2016. During construction, the General Services Administration increased its green building requirements for all newly constructed federal buildings from LEED Silver to LEED Gold. Despite the change, the team secured the Gold Certification earned in December, 2013.

Despite its massive scale, the use of glass to provide natural light and eight planted interconnected courtyards unite this very site-specific building. Completed in the summer of 2013, the Phase 1 U.S. Coast Guard Headquarters features several construction and operating measures in accordance with LEED v2.2 Gold certification, including:

The project includes an 11-story office building providing 1.2 million square feet for 3,860 employees, a separate central utility plant, and 2 seven-story parking garages. The whole project is built into a hillside and the elevation changes 120 feet on the 176-acre site.

“Complicating matters further were the discovery of two aquifers running through the hill, which would have been severely impacted by construction. Working with Philadelphia-based landscape architecture firm Andropogon, the design team developed an 11-level facility in which only the top two levels are above grade. The remaining nine levels are built into and extend out of the landscape, cascading down the hill almost as if Frank Lloyd Wright had transposed Fallingwater into a million-square-foot government facility…

“Each green roof and courtyard is both a literal and abstract expression of five local eco-regions, from the Piedmont uplands down to the coastal plain. There are 200,000 plants, more than 300 native trees, and about 100 varieties of sedum. One courtyard even features a “dry river bed” that mimics the actual bends of the Potomac as it stretches up toward Washington from the Chesapeake Bay.” ~ AIArchitect, 2014

Due to the variety of plants ranging from shrubs to grasses to Sedum mats from Sempergreen, there are four different soil blends on the project. Rooflite® growing media was specified, with Roofmeadow as the growing media consultant. The greenroofs and on structure courtyards of the project used close to 10,000 yards of various rooflite® blends by the time Phase 1 was completed in 2013. Stancills, Inc. Skygarden Division also provided 2,500 yards of the s4 requirement for the job which was a collaboration with Carolina Stalite.

In all, 18 roofs, nine courtyards, and two parking garages are covered with living roofs.