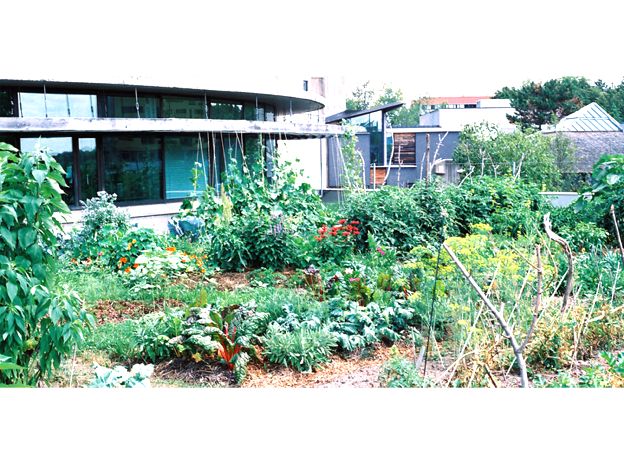 Professor Tom Hutchinson (now retired) spearheaded the Trent University Environmental and Resource Sciences Vegetable Garden project with a two-fold purpose: to monitor ozone levels and conduct environmental research and to raise 30 to 40 different crops of produce which is donated to the Seasoned Spoon, Trent U’s local and vegetarian café, and Food Not Bombs, a local community organization that provides free meals outside City Hall every Monday, as well as to various other community groups, such as the Brock Mission and the YWCA, and the kitchens of volunteers.

The roof is roughly 300 by 100 feet, two-thirds of which is under cultivation, the rest is grass. On the rooftop garden different varieties of heritage seeds are used. In addition to producing diverse and organic produce, the rooftop garden serves as a test zone for tropospheric ozone. Ozone damages local crops such as corn, beans and wheat (Arthur, 2005).The rooftop garden has a depth of 18 inches of media which produces vegetables such as artichoke, sweet potatoes, squash, kale, beets, carrots, radishes, broccoli, peppers, zucchini, beans, turnips, eggplants, melons, pumpkins, and ground cherries.

In 2000, under the supervision of Professor Tom Hutchinson and funded by an undergraduate NSERC grant, then undergrad student Robin Kortright established an experimental vegetable garden on the green roof of the Trent University Environmental Sciences building. Robin says, “I was looking at the suitability of green roofs for urban agriculture, comparing different crops and growing conditions,” Urban Agriculture Notes, October 2001).

Robin writes, “The demonstration project was conducted on the green roof located on the Trent University Environmental Sciences building, Peterborough, Ontario. 14 common vegetable crops were planted in a 7.5 x 30 m plot, subdivided into four equal beds. 2 different varieties of each crop were planted, chosen for their possible suitability to rooftop conditions. Each of these was planted in two beds, one covered with mulch or shadecloth, depending on the crop, the other uncovered. The productivity of individual crops and beds was monitored separately. In addition, wind speed, soil temperature and moisture were monitored on the rooftop and at ground level. The results were then compared to each other, to the ground level results, and also to official Ontario Ministry of Agriculture, Food, and Rural Affairs crop productivity statistics.”