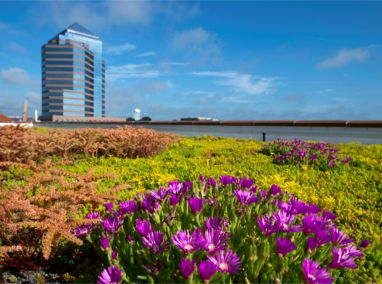 In July 2012, Xero Flor America (XFA) moved into renovated offices in The Republik Building at 211 Rigsbee Avenue in downtown Durham, N.C.’s historic district. The new 2,343 square-foot Xero Flor green roof atop the building, completed in February 2013, is the first green roof installed on a historic building within the boundaries of the district. XFA is the official and exclusive distributor for the Xero Flor Green Roof System in the U.S. The system utilizes pre-vegetated mat technology engineered in Germany and refined over 40 years of continued research and development. Xero Flor mats, planted with varieties of Sedum, have been rolled out on tens of thousands of rooftops worldwide covering hundreds of millions of square feet.

“The green roof at 211 Rigsbee may not have the impressive scale of some of our other projects,” said Clayton Rugh, Ph.D., general manager and technical director, Xero Flor America (XFA). “But is has the potential to be a landmark in the greening of downtown Durham, especially to show how green roofs can help solve the region’s stormwater problem.”

XFA had its offices adjacent to its Southeast regional production fields and facility outside Durham. Last year, the company decided to get more connected to the business community downtown. “We started searching for offices in the historic district — ideally, in a building where we would have the opportunity to showcase our green roof system,” said Rugh.

Robert Shaw West, chairman and CEO of The Republik, a local firm offering brand strategy and communication services, had the solution. His offices are located at 211 Rigsbee. Originally constructed in the 1940s for the Durham Insurance Service Company, the building is known to local history buffs as the home of WSSB radio. West purchased the property from the City of Durham. The Republik renovated the outmoded offices into a more contemporary, open and collaborative work environment. They had space available on the second floor for XFA to lease. “It was serendipity. Clayton was looking for offices downtown, and we had space,” said West. “Plus, we had to re-roof our building last year. Since we needed a new roof, it was an ideal time to also consider adding a green roof, which supports our commitment to sustainability.”

XFA moved into 211 Rigsbee in July 2012. The 2,343 square-foot green roof was installed in February 2013. In addition to the standard building permit process, putting a green roof on the historic building required additional review and approval. “Except for certain minor items, such as re-painting a previously painted surface, most changes to building exteriors within an official local historic district require a Certificate of Appropriateness (COA),” explained Anne Kramer, urban designer with the Durham City-County Planning Department. The goal is to ensure preservation of the historic character of the buildings. Alterations to roof coverings or forms require a COA. With the COA from the Durham Historic Preservation Commission, XFA and The Republik had the green light for the green roof. The project demonstrates that properly planned and installed green roofs can be compatible with historic preservation.

The XF301+2 system option was selected for the project. Fully saturated, it weighs only 10-11 pounds per square foot, making it ideal for the retrofit. Xero Flor America showcases three of its plant palettes on the roof: Appalachian Plant Mix, Southern Plant Mix, and the Mid-Atlantic Plant Mix. Accessible by an external roof ladder, the green roof is not open to the public. XFA does take potential clients and other visitors up on the roof to show them the Xero Flor system and explain how it works.

The city center of Durham sits on the watershed boundary between the Jordan Lake and Falls Lake Reservoirs, major sources of drinking water for the Triangle region of North Carolina. Pollution carried by stormwater has impaired both. Both are subject to North Carolina state rules for reducing pollutants and nutrients in the Neuse River basin and the Pamlico Sound. Runoff from The Republik Building goes into Ellerbe Creek, which has the highest population density of Durham’s urbanized watersheds, and flows on to Falls Lake.

“Given its size and the specific Xero Flor option installed, the green roof atop the building on Rigsbee can prevent more than 50,000 gallons of stormwater runoff annually,” said Rugh.