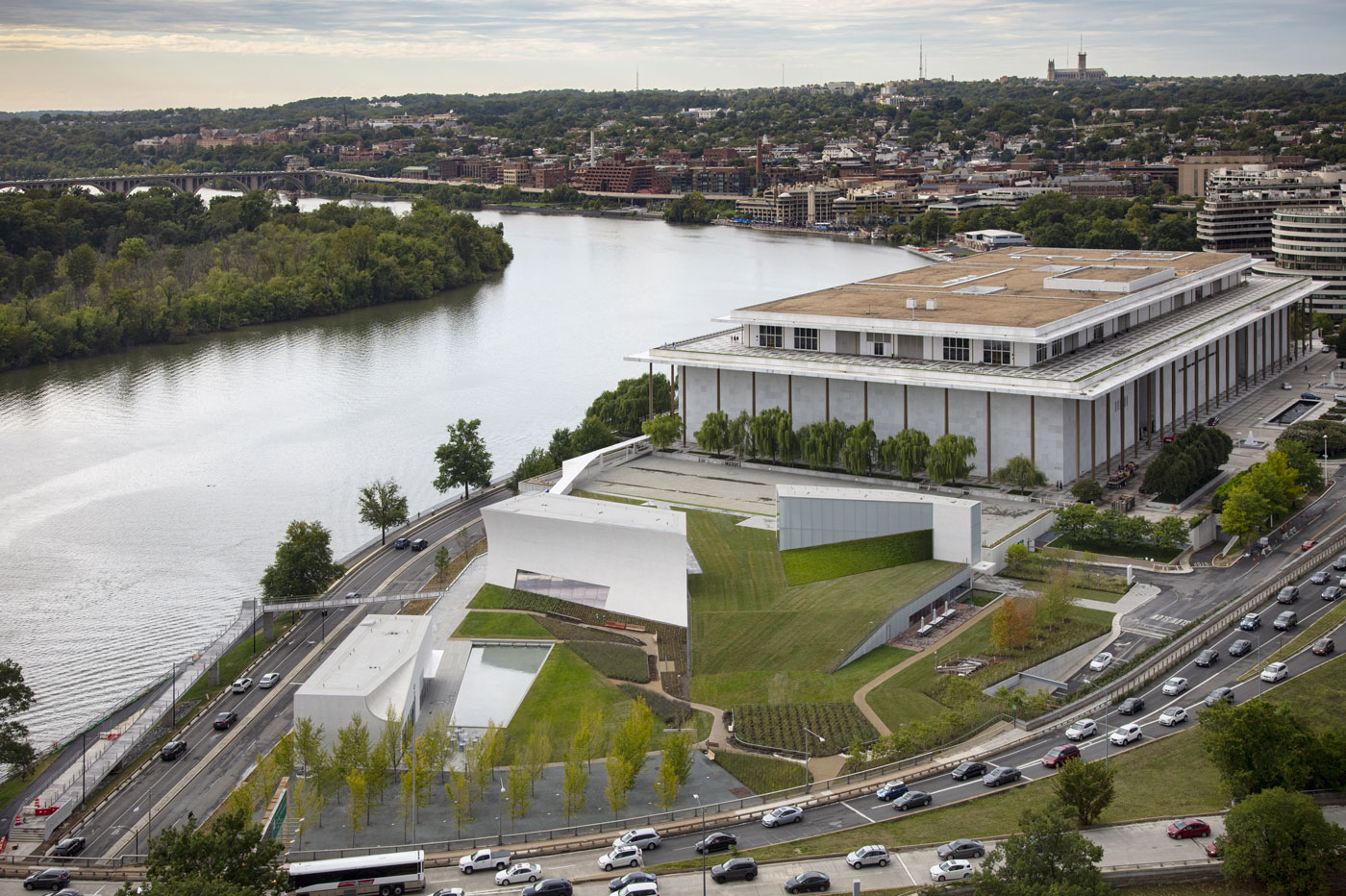 Visit the Kennedy Center website and read specifically about the REACH.

Learn about American Hydrotech and in the Greenroofs.com Directory.

See the write up from Wikipedia regarding the original John F. Kennedy Center for the Performing Arts.

Visitors can walk through a 35 ginkgo tree grove anchoring the south end of the campus (Kennedy was the 35th U.S. president), watch a free outdoor simulcast performance projected on a wall, or stroll to the reflecting pool and mahogany landscape deck which is built in the same dimensions and mahogany boards of Kennedy’s WWII torpedo patrol boat, the PT109. A 16-day Opening Festival was held on September 7–22, 2019 featuring more than 1,000 artists and 500 free events.

“The REACH is a place where visitors, audiences, and artists can come together for collaboration, experimentation, and exploration in the spirit of President Kennedy’s vision for a new frontier for the arts. Many of the spaces have been named after historical and personal moments in his life as an expression of our role as his living memorial.” ~ The REACH

Designed by Steven Holl Architects with BNIM, the environmental and sustainable details of the building stand out against the traditional urban background of Washington, DC as a highly unique structure, particularly for a community-centered performing arts building. The REACH is a marvel of architecture and engineering, thanks to the creative genius of Steven Holl and his team—particularly the massive green roof that covers the campus, developed with Hollander Design Landscape Architects.

Defined by curving white titanium concrete walls, three signature pavilions stretch across the sweeping public lawn overlooking the Potomac River. Building upon the original Edward Durell Stone-designed building, the silhouette of the existing building has been preserved by connecting the new structure underground and via the main plaza. The Welcome Pavilion, Skylight Pavilion and River Pavilion complement the adjacent main building and lavish gardens are a prominent element in the design, optimizing the scenic landscape.

This 72,000 square-foot expansion houses classrooms, 10 interior stages, performance and rehearsal space, a multi-purpose room, and a 5,500-square foot events pavilion for lectures and symposia associated with the performing arts. These areas are buried under the majority of the property; with slopes ranging from 0 to nearly 100%, approximately 69,000 square feet of overstructure green roofs cover the expansion.

American Hydrotech provided all of the waterproofing materials (85,000 sf) and insulation materials (Styrofoam) for the entire REACH project including all of the lawn and paved areas and the swoops.

The REACH features multiple complex “swoop” designs that create a truly unique experience for the public to enjoy. The design starts as a flat green roof, and then rotates into a vertical wall.  Due to the extreme complexity of the three-dimensional swoops, a test mock-up was devised beforehand by the roofing contractor James Myers Roofing, Hydrotrech and Sempergreen called “The Ramp.” Landscape architect Geoffrey Valentino of Edmund D. Hollander Designs, general contractor Whiting-Turner Contracting Company and Myers visited The Ramp, or sedum slope, monthly to work out any potential problems before installation.

Hydrotech’s GardNet® assembly was used in the four swoops of the project for soil stabilization and containment. Three of those swoops employed Sempergreen’s sedum mats, and the fourth swoop along the Potomac River is planted with perennial grasses.  Sempergreen USA and Edmund Hollander Landscape Architects designed sedum blankets into three different plant palettes.

“For the most vertical sections of the roof where it becomes a wall another partnership of Sempergreen USA and Knauf Urbanscape designed a soil mix that starts with Lite-Top soil from American Hydrotech and merges slowly into a LiteTop/Urbanscape mineral wool mixture which in turn merges slowly into the vertical section that has 100% green wall mineral wool from Urbanscape inside the Hydrotech soil stabilization system.” ~ Sempergreen USA

Referring to the swoop areas, Sempergreen USA says they provided seven different irrigation zones and different water cycles with fertigation to the “three-dimensional cork-screw green roof” in those areas that are more like a green wall, and regular irrigation in others that are flatter – minimizing water expenditure with micro-bursts of water.

LEED was established as a priority early in the planning phase. Integrated design and construction was a consistent process throughout the project. Understanding the building’s end-users, surrounding site, envelope design and energy performance were a core focus in making informed design decisions. Energy and daylighting models were used to analyze the building performance and human experience. To the extent feasible amenities in the existing facility are shared by occupants in the expansion building in order to maximize resources such as parking.

The REACH at the John F Kennedy Center for the Performing Arts is now officially LEED Gold certified, and here are just some of the sustainable building features that were incorporated into the project broken out by LEED Project Categories:

• Kennedy Center is inherently sustainable based on its urban location. There are many neighborhood amenities within a half-mile walking distance including the Lincoln Memorial, restaurants, CVS, dry cleaners, and places of worship.
• Patrons and performers are encouraged to use public transit as an alternative to personal vehicles. Close access to the Foggy Bottom Metro Center station provides access to three major subway lines: Blue, Orange, and Silver in addition to 8 bus lines. The North Capitol Street Line runs directly to the building. Bicyclists are encouraged to ride to the building and take advantage of the 52 bike racks located throughout the campus.
• Low-emitting, fuel efficient vehicles are provided with preferred parking privileges in our parking garage. Three electric vehicle charging stations are also included.
• The landscape was designed to promote biodiversity and protect natural habitat. Over half of the total site area, excluding the building footprint, is planted with native or climate-adapted trees, perennials, and fescue sod. Since much of the building is below ground in order to preserve the silhouette of the existing building, much of this open space is actually a green roof.
• Rainwater is typically be piped away causing sewers to be overloaded leading to flooding during large storms. We took a different approach at REACH and reduced the amount of runoff by almost 60%, using native and adapted vegetation.
• The REACH building mitigates heat absorption by locating all parking underground, primarily under vegetated roofing. Also, most of the site is either vegetated or light grey concrete and the roof of the building is a white, reflective material.

• An energy efficient hybrid system was designed to create supplemental cooling and heating with a closed-loop geothermal system to reduce the environmental impact associated with grid-sourced energy. This system uses a new water-to-water heat pump and will also have the ability to pre-cool the return water to the existing building chiller plant.
• The REACH building is served with chilled water from the existing Kennedy Center chiller plant, which consists of four 800-ton chillers, cooled by condenser water from the Potomac River. Two circuits within the Expansion use chilled water; one low temperature circuit serves the new hydronic coils while a second, high temperature circuit serves the underfloor radiant floor system.
• A Renewable Energy Certificate is a tradable environmental asset that represents one-megawatt hour (MWh) of renewable electricity. The Kennedy Center opted to “green” its power source for the Expansion by offsetting 35% of the total annual electricity use. This arrangement provides the renewable energy generator an additional revenue stream, encouraging further development of renewable energy.

• Low-emitting paints, sealants, and flooring were used to protect the health and well-being of occupants from the volatile organic compounds (VOCs) that are typically found in these products, which negatively affect respiration.
• Occupant comfort is an important component of the design. People are more comfortable and productive in spaces where they have control over their environment. Spaces are designed to optimize temperature and humidity, and 100% of occupants can control the lighting in their spaces by using dimmers, switching, and vacancy sensors. Kennedy Center has an ongoing commitment to occupant comfort. They will monitor temperature and humidity, and will also survey occupants regarding their satisfaction with thermal comfort, making any necessary modifications to the building design and operations.
• To further a commitment to occupant health and wellbeing, Kennedy Center has a Green Housekeeping policy which requires less toxic cleaning products and practices.

Hollander Design Landscape Architects says “The REACH is a ‘living memorial’ that erodes boundaries between audience and art, landscape and river, structure and land.”

The performing arts building and public campus is earning early critical praise for its accessible, community-centric programming and innovative design that offers a window into artists’ creative process. Merging architecture and landscape, the John F Kennedy Center for the Performing Arts’ the REACH is a lyrical extension and Washington, DC’s latest cultural landmark:

“It’s not for the elite; it’s for everyone.” ~Edmund Hollander, FASLA in ASLA’s The Dirt