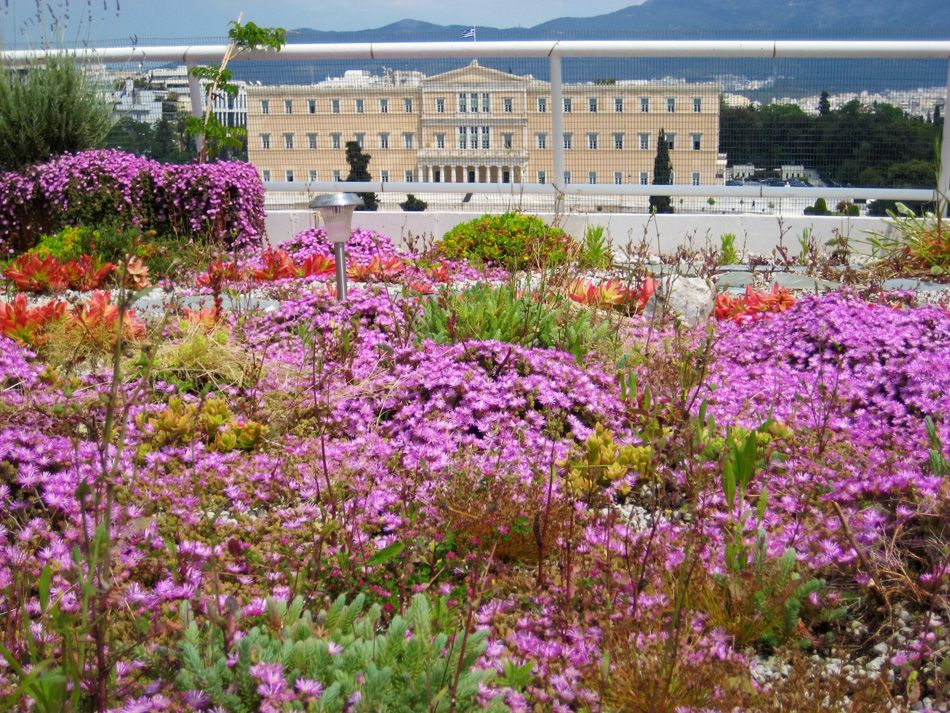 Read the March 29, 2017 The Models are not Prescriptions-Applying Green Roof Technology in New Places by Andrew Clements in The Nature of Cities. Watch the “Two Extremes in Waterwise Design from Denver, CO & Athens, Greece” video by Andrew Clements & Karla Dakin from the 2015 Greenroofs & Walls of the World Virtual Summit: Connecting the Planet + Living Architecture on the GreenroofsTV channel on YouTube.

For more information about the Hellenic Treasury – Constitution Square, visit Oikosteges at: http://www.oikosteges.gr or contact Andrew Clements at: [email protected]

Constitution Square (Syntagma Square), considered the most important square of modern Athens from both a historical and social point of view, is located at the epicentre of commercial activity and Greek politics and is situated opposite the Greek Parliament.

The Greek Ministry of Finance installed this green roof on the Treasury in Constitution Square in Athens. The so-called “oikostegi” (Greek for oiko, pronounced eeko, meaning building-ecological, and stegi, pronounced staygee, meaning roof-abode-shelter) was inaugurated in September, 2008. The main motivation for this installation was to provide a research roof to study the thermodynamic impact of a green roof in hot Athens.

Studies of the thermodynamics of the roof in September 2008 concluded that the thermal performance of the building was significantly affected by the installation. In further studies, in August 2009, energy savings of 50% were observed for air conditioning in the floor directly below the installation. The ten-floor building has a total floor space of 1.4 hectares. The oikostegi covers 650 m2, equaling 52% of the roof space and 8% of the total floor space. Despite this, energy savings totaling 5,630 Euros per annum were recorded, which translates to a 9% saving in air conditioning and a 4% saving in heating bills for the whole building.

An additional observation and conclusion of the study was that the thermodynamic performance of the oikostegi had improved as biomass was added over the 12 months between the first and second study. This suggests that further improvements will be observed as the biomass increases still further. The study also stated that while measurements were being made by thermal cameras, a plethora of birds and beneficial insects were observed on the roof, ranging from robin redbreasts, yellow hammers, yellow tits, coal tits, and sparrows to kestrels hovering high above eyeing up the smaller birds. Many species of pollinators have been seen such as honey bees, tiger swallowtail and monarch butterflies, also dragonflies and ladybugs. Obviously this was not the case before installation.

Finally, the study suggested that both the micro-climate and biodiversity of Constitution Square, in Athens, Greece had been improved by the oikostegi.

Athens and Greece, as a whole, is a seismic hot spot so one of the main limitations of this installation was acceptable load. The wet weight of the build-up is under 50 kg / m2. The light weight was achieved by incorporating a number of strategies including shallow substrate depth (less than 10 cm) and lightweight substrates. While high water storage capacity would be a benefit for roofs in dry Athens, weight considerations prevented this from being viable.