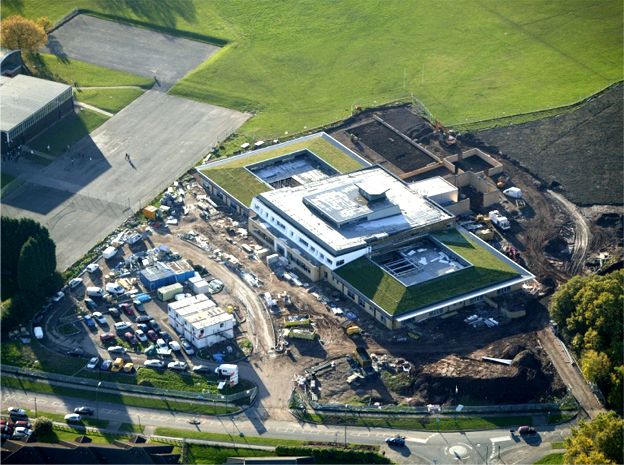 Solihull Centre of Inclusive Learning is an ?8 million project that sees two special schools – Forest Oak and Merstone – being moved into the new school building on Smith’s Wood School campus in Windward Way, Smith’s Wood, Birmingham, UK. The school will open in 2006 and is one of the first in the country to be built under the Government’s Building Schools for the Future scheme. The picture shows the team laying the final bits of the grass roof in a topping off ceremony on February 16, 2006. The school is aimed at being environmentally friendly and will have a sedum covered roof which will provide extra insulation to the building, keeping it cool in summer and warm in winter. The roof is made of specially selected sedum plants, which improve humidity and support wildlife. The school will also have a state of the art heating system, which draws heat from the ground. The new centre will cater for up to 180 pupils aged between 3-19 years with the most complex needs. The Building Schools for the Future programme will see all secondary schools in the borough rebuilt or refurbished as part of the nationwide scheme.

The scheme is being project managed by Stephen Crichton of Faithful + Gould and has been procured under a partnering contract with Moss Construction and Solihull Metropolitan Borough Council. “This school will provide first class services for children who have the most complex needs. Now the exterior is complete we look forward to the day when the classrooms are full of young people, bringing the centre to life.”