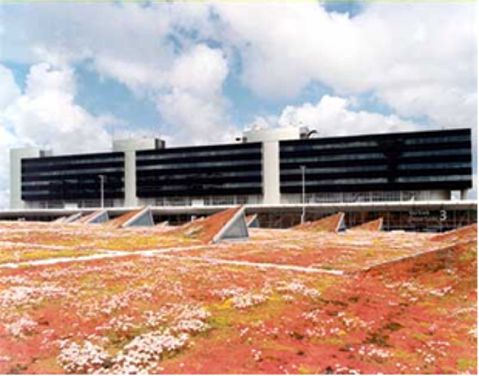 In Germany and the Netherlands, the government requires an ecological answer for areas covered with concrete and other impervious materials. Information on Schiphol International Airport (AMS) is provided here as a whole for the entire airport, as individual roof figures are not presently available for each roof, only for Schiphol Plaza. The majority of roofs greened at Schiphol International Airport buildings have used Xero Flor and ZinCo products. Xero Flor manufactures a specially designed vegetation mat specifically for airport use. The Schiphol airport itself contains three buildings with extensive greenroofs of 8500 m2 (91,493 sf), 3500 m2 (37,674 sf), and 1330 m2 (14,316 sf). Schiphol also has two intensive greenroofs totalling 400 m2 (4,306 sf) bringing the airport total to 13,730 m2 or 147,789 sf.The Schipholrijk neighbourhood surrounding AMS has six buildings with intensive greenroofs measuring approximately 10,000 m2 (107,639 sf) each for a total of 60,000 m2 or 645,835 sf. This figure is not included in the total area greenroofed at AMS, but provided as an aside. The estimated total airport area greenroofed at Schiphol International Airport and its surrounding Schipholrijk neighborhood is approximately 73,730 m2 or 793,623 square feet (sf).

Aart Veerman, President of the International Green Roof Association and Commercial Director of Van der Tol b.v., estimates the total area on the grounds of Schiphol-Airport greenroofed by Xeroflor with sedum mats to include three roofs at 13,330 m2, to equal 143,483 sf. The other two large extensive roofs are situated on the head office of “Schiphol Real Estate” and the ?Sky-Master? building. Mr. Veerman?s company, Van der Tol b.v., holds the maintenance contract on both. He states that the maintenance of the sedums is really simple – the only extra measure is the filling of the open space between the sedum mats to account for normal yearly shrinkage.Inside the departure and arrival buildings are two small 400 m2 intensive patio roof gardens at Vertrekhal Noord that were built in 2001, but they are not easy to visit because of strict security regulations. These are ZinCo greenroofs utilizing Floradrain FD 25 green roof systems.