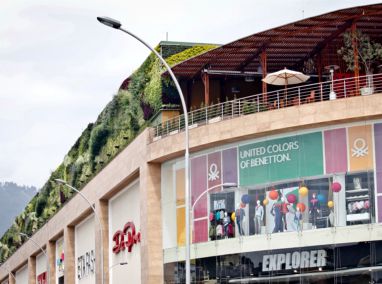 Located on approximately 4 hectares encompassing 160 commercial establishments and providing 2,000+ parking spaces, Scala Shopping is a new three-story upscale retail center in the Cumbay? neighborhood in northeast Quito, Ecuador. Started in 2006, the Quito Municipality and developer, Grupo Promotor Inmodiamante S.A., sought a modern shopping destination where it was possible to have fun in a safe and secure setting, and generate employment and sound economic development.

The design takes advantage of the natural elements of the area and offers visitors recreational open space that merges nature and new-generation entertainment with technology at the forefront of Latin America. Scala Shopping seeks to reduce pollution, has recreational areas and Wi-Fi service available in all areas, and boasts the country’s largest 3D IMAX screen.

They city says one of Scala Shopping’s strong points was their commitment to supporting the environment, and a series of hydroponic living walls totaling 1,000 m2 was chosen as its crowning feature from the Spanish firm Paisajismo Urbano. They felt that adding vertical gardens would promote the union of man and nature, inviting clients to take care of nature and help mitigate the shopping mall’s considerable carbon footprint.

Scala Shopping has a total of 9 different living walls both inside and outside the building. Paisajismo Urbano, the system designer and manufacturer who assisted local Quito installer and representative Greenstar, says this project has been the most technologically complex one they have worked on. From start to finish, the project was finished in record time, taking only a month and a half to complete.

Approximately 30,000 plants of 90 different species were used – 60 of them native to the area. As in all of their projects, the health of the vertical garden is monitored as part of the local Paisajismo Urbano maintenance service agreement. It is estimated that yearly the vegetation on the facades of Scala Shopping will produce oxygen for 1,000 people and that all together the 9 vertical ecosystems can capture about 300 tons of harmful greenhouse gases.

Installed in late October, 2012, Paisajismo Urbano founder and biologist, Ignacio “Nacho” Solano, says that as usual he took advantage of his visit to Ecuador to perform research and work in the Amazonian jungles at the Yasuni National Park.