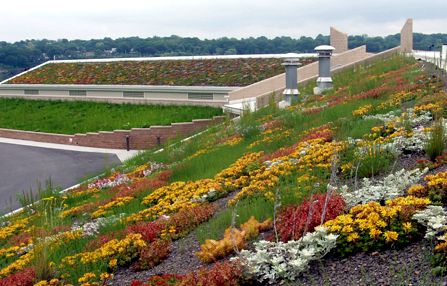 As its name implies, Save The Bay is focused on protecting the environment. It’s no surprise then, that when the non-profit organization was looking for a roof for its new education center, the focus was on “green” roofs. In this case, “green” meant a vegetated roof, with plantings that would help the building blend into the surrounding landscape. The “natural” choice for such a roof? A Green Roof System from Sarnafil.

Incorporated in 1970, Providence-based Save The Bay is dedicated to protecting and restoring Rhode Island’s Narragansett Bay and its watershed. Its activities include cleaning up the waters of the bay, reclaiming and restoring brownfields, and educating children and adults about how the bay contributes to their economy, environment and quality of the life. The Save the Bay Center was recognized nationally in November as a prestigious Phoenix award winner for brownfields development excellence.

The original roof specification called for a hot rubberized asphalt waterproofing system combined with a TPO roofing system. However, Apollo Roofing and Sheet Metal of Providence, RI, a Sarnafil Elite Contractor, had another recommendation.

“We felt that the 4:12 slope of the roof would make installation of the hot rubberized asphalt waterproofing system very difficult, since the asphalt would be poured onto the slope,” said L. Keith Deal, vice president at Apollo Roofing. “So we recommended the Sarnafil System 1000 Waterproofing System with the Sarnafil Adhered Roofing System.” The roof was planted in October, 2004.

One reason Sarnafil green roofs are so successful is because Sarnafil has extensive experience, having been involved in over 1,000 green roofs worldwide. The Sarnafil System 1000 features a durable vinyl membrane with the flexibility to allow installation over irregular substrates in any temperature. It is one of the few waterproofing membranes that have passed the most stringent European test standards for root resistance including both the German FLL standard test and the Swiss SIA 280 material standard. The Sarnafil Adhered Roofing System’s membrane is fiberglass reinforced, offering exceptional dimensional stability and a low coefficient of thermal expansion.