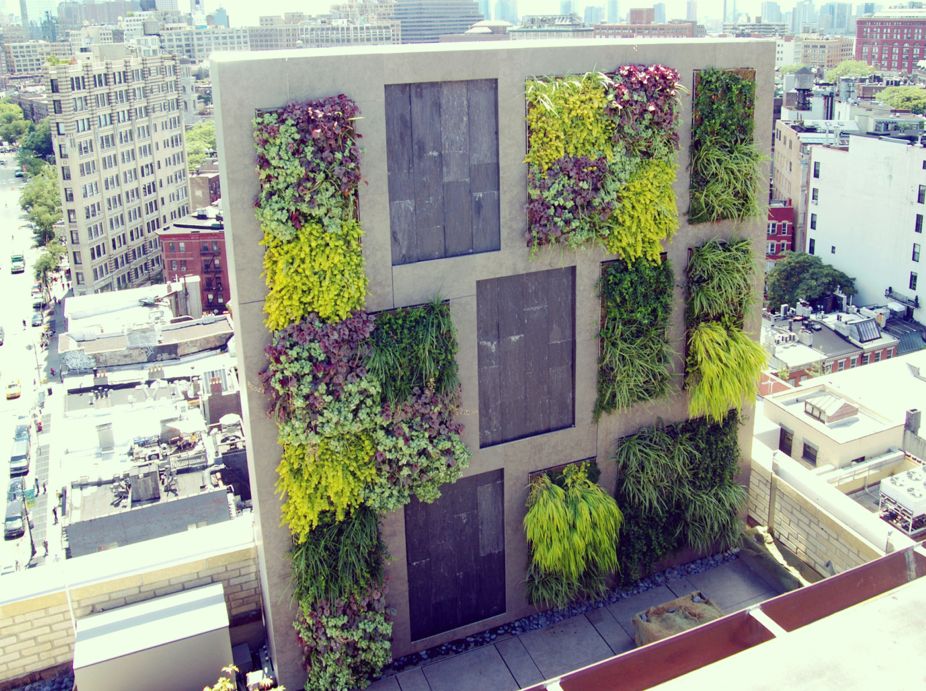 Occupying the 18th floor of an Art Deco building in a landmark district, this 2500+ SF terrace wraps the four sides of a penthouse apartment whose living space it nearly doubles. The design of the Private West Village, New York Penthouse Terrace exploits the tension between two distinct yet overlapping modes, experiential and visual.

As an integral part of the clients’ living space, the terrace brings domestic program outside into distinct ‘rooms.’ At the same time, it forms a complex and layered middle ground which mediates views to the city beyond. With a simple palette of steel, reclaimed teak, and stone, the terrace creates an integrated environment that bridges between two distinct scales: the domestic scale of the single-story penthouse and the massive, building-scale presence of the parapet elements built to be seen from 18 stories below.

“Though most of the interior was locked away from light and air, the original apartment had a terrace surrounding it on all four sides, giving an opportunity not often found in New York to create a space that spanned from interior to exterior, connecting the interior of the apartment with the terrace and to the city beyond…In the southeast corner of the apartment, a tall brick wall on the outside terrace was used to create a master suite, extending the bedroom from the interior to a secret garden on the exterior. Vertical plantings and a waterfall clad the brick wall and enclose the far end of the garden,” (Tinmouth Chang Architects).

The project embraces the technical challenges of rooftop construction by integrating them into its design language, inventing a floating ground plane, which acts as ballast to cantilever the stainless steel railing, achieving stability without anchoring to building surfaces. The railing itself becomes a garden element, supporting planting, lighting, and surfaces which give depth to the parapet edge.

“David and Henrie Whitcomb’s vertical garden redeemed a chunk of unusable space on their 2,500+ square-foot wraparound terrace in New York’s Greenwich Village. Their penthouse, which public records show was purchased for $8.7 million in 2007, had “a great big 15-foot-high, 15-foot-wide ugly tan brick wall” that ruined the view from the master bedroom, said Mr. Whitcomb, who founded Automated Trading Desk, one of the first high-frequency trading firms,” (Wall Street Journal, 2014).

The Whitcombs, who own a second home in Hawaii, couldn’t tear down the wall: It is the 1928 building’s chimney. So they transformed the eyesore into the centerpiece of their terrace garden, which also features a grove of Japanese maple, gray birch and serviceberry trees, and an evergreen that can be pushed on a built-in track to a prime spot at their living room window at Christmas.

During the 26-month remodeling project, landscape architect Linda Pollak of Marpillero Pollak Architects, in collaboration with Project Lead John Tinmouth of Tinmouth Chang Architects and David Seiter of Future Green Studio, designed a greenwall of panels with a modular slate water feature and recessed slots for 600 plants to bracket to the chimney, embedding the panels with ornamental grasses and trailing plants in shades of green, silver and purple. The greenwall panels were pre-grown three months before installation and the plants are watered by a drip irrigation system.

Framed by the client’s bedroom window, the living wall is the focal point of the garden. Creating the natural look hundreds of feet above the sidewalk demands intricate engineering, sophisticated waterproofing and irrigation systems, custom-designed soil, and occasionally, a crane.