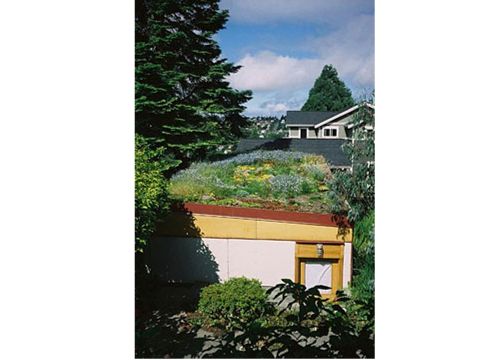 Read the detailed case study at the HARRISON architects website here and Linda Velazquez’s Greenroof Project of the Week feature on Greenroofs.com of 4.11.10 “GPW: Private Seattle Green Roof Garage” here. The greenroofed garage was published in the March/April 2006 issue of Northwest Home & Garden, the March 2006 issue of Dimensions, the newsletter of the Washington State chapter of American Society of Interior Designers, and the Fall 2006 issue of West Sound Home & Garden. It is featured on the cover of the book ManSpace: A Primal Guide to Marking Your Territory by Sam Martin, about places men make for themselves, and in Terence Conran’s Eco House Book. A snippet of video of the project appeared in advertisements for the Pepsi Refresh Project in 2010.

As the client/architect, our garage was built to accompany the 1950 rambler in the close-in Mt. Baker neighborhood of Seattle my wife and I purchased in June of 2003, the week before our son was born. In 280 square feet (a one car sized garage) it houses and protects (so far) one bicycle, two vintage motorcycles and our Mini Cooper, as well as providing space for a small workshop and every man?s dream, lots of pegboard. On the pegboard, my father?s and grandfather?s hand tools. Planted on the east, the rose bush my grandfather brought with him from Scotland when he emigrated in 1917, recently transplanted from outside my parents’ house in Ohio.
The previous owner of the house built an illegal deck atop the foundation of the original off-the-alley terraced carport just prior to putting house up for sale, clearly without the benefit of a structural engineer! The flimsy deck was deconstructed, and the new structure built on the existing foundation and stem walls?almost entirely from wood salvaged from the existing deck. Since it was our own house (rather than a client?s!), we thought it would be a great opportunity to experiment with a less expensive residential alternative to $15/SF proprietary (and warranted) green roof systems used on commercial projects, and so promote the use of green roofs in residential applications. With the help of everyone involved (see long list of credits) I believe we succeeded admirably.

About half of the roof is planted with Eco-Turf?a mixture of baby blue eyes, red clover, yarrow and fescues. The other half is planted with various drought-tolerant sedums. We?ve also added strawberries, nasturtiums and poppies. Other than irrigating the roof through the first summer to establish the plants, we?ve spent about twenty minutes doing ?maintenance? on the roof in its first two years.The garage was on the Northwest EcoBuilding Guild?s 2004 Green Roof Tour, and since its completion has been visited by numerous curious lay people as well as architects and builders. We look out on the roof from our kitchen window every day. In every season it?s a joy to behold.