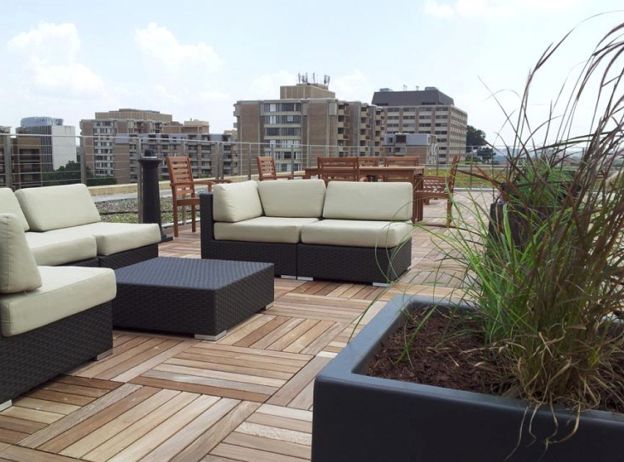 Learn about Furbish in The Greenroof & Greenwall Directory.

The Potomac Plaza Co-op is a mid-century modern residential building with 273 apartments located in the Foggy Bottom neighborhood of Washington DC. At least 80% of the apartments are owner-occupied.

The Potomac Plaza Cooperative wanted to do something environmentally conscious with their mid-century building. In early 2013 the Co-op hired Annette Environmental Inc. to evaluate and conduct a life-cycle analysis on several alternatives. They considered solar, a green roof, and hybrid solar/green roof options. Annette’s analysis led to the recommendation of a green roof. Washington DC’s Department of the Environment (DDOE) offered a $5/ft2 green roof rebate administered through the Anacostia Watershed Society which aided the cost/benefit.

After a RFPprocess, Furbish was chosen to operate in a Design/Build capacity and Bollinger Roofing as the roofing contractor. The complexities of the project required the team work closely together. The existing roof structure had a weight restriction of 25 lb/ft2 and site access was a significant challenge. Further, Furbish determined that the roof offered an unconventional, yet rewarding opportunity. The original roof was ballasted with large gravel aggregate. This would need to be removed for a traditional green roof to be installed. However, Furbish’s EcoCline system allows large, coarse aggregate to be used in the media profile (mostly as a weed suppression layer)

Furbish and Bollinger developed a strategy to reuse the existing gravel. In the end, roughly 80% of the gravel was reused as the coarse aggregrate weed suppression layer. Trucking media into the District and using heavy machinery to reach a relatively tall building by DC standards (100 ft), not only would add significantly to the project’s carbon footprint and resource usage, but add cost. Therefore, the decision to reuse the gravel was a win for all parties made possible by the Co-op’s vision and the ability of Furbish and Bollinger to coordinate challenging logistics and each firm’s commitment to sustainability.

A small amount of EcoCline fines were added to the gravel media in order to allow nutrients to absorb into the media. EcoCline media is comprised of 100% post-industrial material in the fines and the organic matter is a by-product of paper production. Firestone TPO waterproofing was installed by Bollinger and International Leak Detection’s EFVM water leak detection was installed.

The plant palette consists of a variety of sedum that are common in the Mid-Atlantic region. The plants were propagated from cuttings which were harvested from other regional green roofs. Plugs were planted sparsely. It is expected the performance of each variety will differ due to the stratification of the rooting zone. Broad leaf sedums, such as S. kamchaticum and S. floriferum, as well as other sedums such as S. spurium and delosperma, have proven to root well from cuttings in EcoCline profiles. 70-80% vegetative coverage is expected by late spring next year.

Although not the driver on the project, an EcoCline 2+2 green roof manages a considerable amount of stormwater. According to DDOE specifications, Potomac Plaza’s green roof manages 3,870 ft3 of stormwater, more than double a traditional system of its size and profile. The project successes were many: the carbon footprint was significantly reduced for the existing building and construction process, the owner proactively sought to make their building more sustainable, and a subsidy issued by DDOE effectively incentivized the important stormwater BMP retrofit market. And finally, at Potomac Plaza, the project team first strived to reduce and reuse, then recycle.