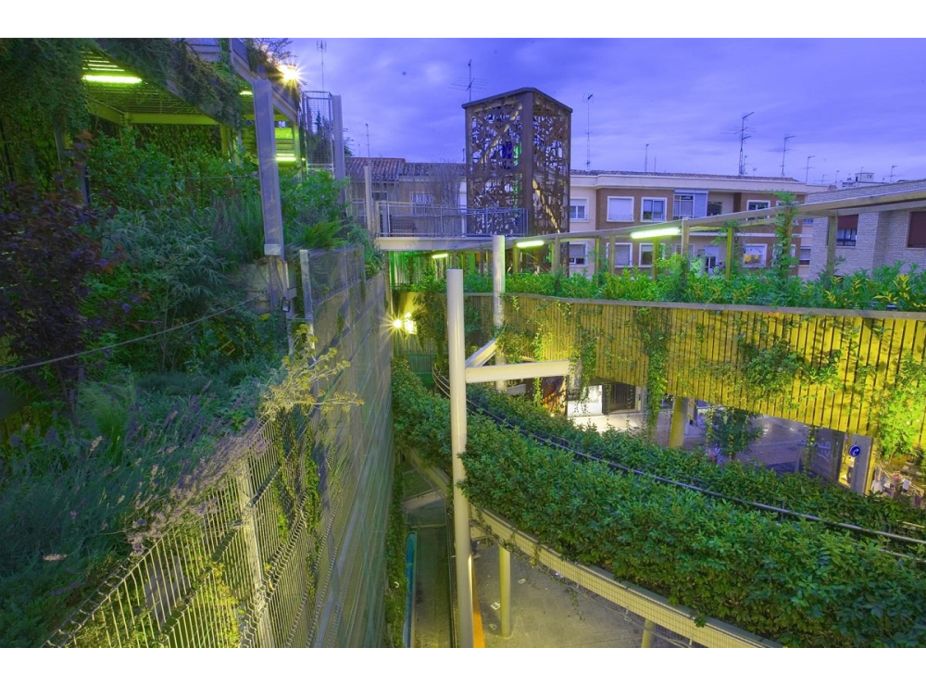 See the following architectural panels on the project from Sicilia y Asociados Arquitectura: Panel A1, Planta and Section.

Watch the 1:58 video Plaza Delicias Vertical Garden – Project of the Week 12/1/14 from Greenroofs.com on the greenroofsTV channel on YouTube.

Delicias is a densely populated neighbourhood in the city of Zaragoza, Spain. It was formed in the 50’s but the greatest development took place in the 60’s and 70’s. In the late 1990’s an unsafe building located at the intersection of Calle de las Delicias and Calle de Caspe was torn down. The inhabitants were left with a vacant lot with the unsightly, inward-facing flank walls from the two adjacent buildings. The lack of planning, green spaces, and symbolic landmark places for its residents created an unresolved issue for the revitalization of the neighbourhood.

The conceptualization of the Plaza Delicias project started in the late 1990’s as result of an initiative by the neighbourhood residents association (Asociacion de Vecinos de Delicias “Manuel Viola”). This Association gathered local support, including from the City of Zaragoza, to work on the small corner site that was transformed into a square on Delicias Street – a pedestrian artery and undoubtedly the vital centre of the neighbourhood.

The main challenge of the project consisted in creating a representative public space that could provide multiple benefits including offering a meeting place for the Community as well as a space for leisure and integration and association with much desired nature. The reference site has a ground area of approximately 530 m2 (5,705 sf); the solution proposed for this project set out, among others, the need to resolve the presence of the massive, exposed flank walls left over from demolition.

To the designers, a vertical garden proposal – similar to the community gardens concept, popular in small sites in New York City – was the answer. This garden would give purpose to the unattractive barren walls that faced the yet-to-be constructed Delicias Square, and would become a garden not just to contemplate but also to transit; the public space of the Square would be extended vertically. The offices of the Residents Association would be located in the basement and they would become the main driving force of the Square, responsible for the environmental management of the space, as well as its use as an educational space and for citizen activity. The conceptual idea of this vertical garden arose from the memory of that special childhood tree that we all remember and where we all, in some way or another, have spent time and been a part of our dreams and experiences.

At the time, few commercial green wall systems were available so a custom system was designed by Sicilia y Asociados Arquitectura and the gardening team of Lazaro and Isabel Vela. All of the supporting metal structures of the building, designed by Sicilia y Asociados Arquitectura and their engineering team of Benedict Perez and Ingemetal, were developed for the vertical garden that is a metaphor for that special tree of memory. The system is designed for the plants to always retain direct contact with the ground itself or with planter boxes located on various levels. The hanging garden effect is a web of recycled tow ropes and metal meshes for plant support, development and growth of the plants. The structural metal beams and trusses thus became large linear planters capable of providing the necessary support for the different plants and irrigation system. A recirculating drip irrigation system was installed for easy maintenance.

The conceptual genesis of the project expands the Plaza Delicias in a tight urban space by developing a vertical garden of 500 linear metres of different heights with various accesses and platforms for a multitude of activities forming over 800 m2 of landscaping elements, in addition to 530 m2 of plants located at the Plaza Delicias street level. A “botanical route” encompasses the space with a total of 84 different plant species.

The vertical garden and the adjacent streets converge in a square that occupies the whole dimension of the original site with different levels, highlighting the presence of a stage with stands. From this basic level, visitors can either access the lower ground floor of the association, or go up the ramps to other levels with their perspective spaces. Each route and each space offer great variety to the garden path. The routes crisscross the height of the plaza’s space as if they were tree branches sprouting out from the trunk. Thus, we find these different levels: from 3.15 to +4.70, from +4.70 to 6.25, from 7.80 to 9.35 and 10.90 to complete the ascent to +14.40 metres over the level +/- 00 of the square. All the ramp routes are accessible, with no architectonic barriers.

The entire constructed unit is presented as a unique whole interrelating architecture with naturalisation. The beams of the footbridges that link up the different levels have been designed as different sized garden boxes that house the various species. A unique and striking vertical tower is also accessible via a lift, and is naturalised by incorporating recycled metal manufacturing plate dies, which were destined for the scrap yard, forming a metal latticework that incorporates different colour prints using Plexiglas mobiles, plantings and Plexiglas on the façade. Initiatives and citizen activity proposals are continually being presented, such as the creation of artistic activity spaces or incorporating a permanent classroom in one of the spaces of the vertical garden where residents will find the technical support to create their own plant plots and care for them. The aim is to give the entire plaza an educational nature with the reference and explanation of the different species that have been incorporated.

The designers hope that this symbolic “tree” will be an example of naturalisation that will, on the one hand, be used to contribute to the general rehabilitation of a neighbourhood and, on the other, to conceptually balance out the lack of naturalised spaces that the neighbourhood should have had from the start. The Plaza Delicias Vertical Garden was awarded the “Premio Europeo Espacio Publico 2010” – the European Award for Public Spaces 2010 – competing with 303 other projects in 33 countries. It also became a finalist in the “6o Premio Europeo del Paisaje Rosa Barba 2010” – the 6th European Landscape Rosa Barba Award 2010.