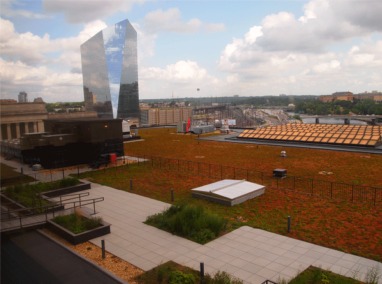 Learn about Roofmeadow in The Greenroof Directory. The PECO Main Office Building is featured in The 2011 Greenroofs & Walls of the World? Calendar from Greenroofs.com for the month of March.

The PECO Building is an office highrise in Center City Philadelphia, and the building gets its name from PECO (Philadelphia Electric Company), one of the companies that merged to form Exelon Corporation. The Exelon Energy subsidiary PECO completed a five-month project to install a green roof at its headquarters building in December, 2008. The rooftop garden – on the top of an eight-story section of the building, holds growing media up to 8 inches thick, and the vegetative covering will reduce rainwater runoff by up to 70 percent and provide better insulation. The green roof development at PECO is part of the company?s recently-announced comprehensive environmental initiative with a range of programs over the next several years.

With anticipated investment of $15.3 million, the initiative also includes the opening of PECO?s first ?green building? in West Chester, replacement of the landmark Crown Lights messaging system atop the company?s Center City headquarters, energy efficiency upgrades at many of the company?s offices and service centers across the region to comply with Leadership in Energy and Environmental Design (LEED) certification, as well as community and customer support for energy efficiency and environmental benefits, (2008 Exelon Press Release).

This project’s accessibility to the general public is its most important feature. To date (as of September, 2010), nearly 1,000 people have participated in tours and special events on this roof. In partnership with the Pennsylvania Horticultural Society (PHS), PECO co-sponsors public green roof tours that attract architects, developers and engineers intent on learning more about vegetated assemblies. These popular and well-attended tours expose countless design professionals and interested citizens to this classic German style green roof technology. The green roof serves as an emblem of Philadelphia?s progressive storm water management policies. Mayor Michael Nutter has recognized the roof as a step forward in his quest to make Phialdelphia the greenest city in America. In the effort to encourage a critical mass of enlightened Philadelphians to support the development of urban roof top landscapes, the PECO green roof is proving to be a key player.

The city of Philadelphia is plagued with a serious water pollution problem as the result of a centuries old combined sewer system. The PECO Main Office Building sits on the densely developed Schuylkill River banks in the heart of Center City and the roof footprint is 95% of the lot area. In an effort to solve the onerous CSO issue and comply with the Federal Clean Water Act, the city is incentivizing green infrastructure as a key solution, with the added advantage of providing additional environmental benefits for the adjacent cityscape. The 8th floor podium roof, covered with more than one acre of vegetation, is visible from the surrounding high-rise buildings and provides a focal point for thousands of Philadelphians. PECO estimates that the green roof will reduce the annual volume of stormwater runoff by 60 to 70 percent. The traditional German technology that inspired the design and construction of this roof is proving to be a fountain of inspiration and education for design professionals and corporate developers alike.

In order to safely accommodate guests, the roof area used for tours and gatherings is separated from the rest of the green expanse by a self-ballasting, ADA compliant railing for pedestrian safety. The railing provides a secure barrier without requiring the attachment to or penetration of the roofing membrane. This retrofit project was established with low-maintenance pre-vegetated Sedum mats over a specially formulated growing media.

Formulated by Charlie Miller, the media was provided by SkyGarden, the green roof division of Stancills Inc. The sedum mats were grown in one batch of the extra lightweight media in Virginia, by Sempergreen. On site in Philadelphia, a second batch of extra lightweight media was distributed before the mats were unrolled. The growing and drainage media for the intensive beds and planters was also provided by SkyGarden. Because of the dead load restrictions applicable to the majority of this retrofit green roof, the extensive green roof media was designed to be extra-lightweight. The extensive green roof assembly weighs 17 psf when fully saturated. The cool green Sedum carpet is punctuated by pathways, lit seat walls and native perennial beds located over zones with a higher dead load capacity. These native beds dramatically counterpoint the adjacent Sedum cover.

The drainage layer in the extensive green roof is a 1-inch thick low transmissivity mat composed of 100% post industrial waste foam from the car seat manufacturing process. This composite mat has unidirectional drainage channels on the underside. The overall design intent is to delay runoff, thereby improving stormwater performance. An interconnected series of drainage conduits were integrated into the mat to create positive drainage flow through the roof. In addition to its drainage capabilities, the mat was accepted by the waterproofing manufacturer as acceptable protection for the primary membrane. Finally, the Sedum roots grow into the voids of the mat, creating a tightly integrated and healthy root structure which knits the entire assembly together. Roofmeadow and PHS closely track the native plants to identify those that are best able to endure the harsh conditions of a windy, riverside rooftop.