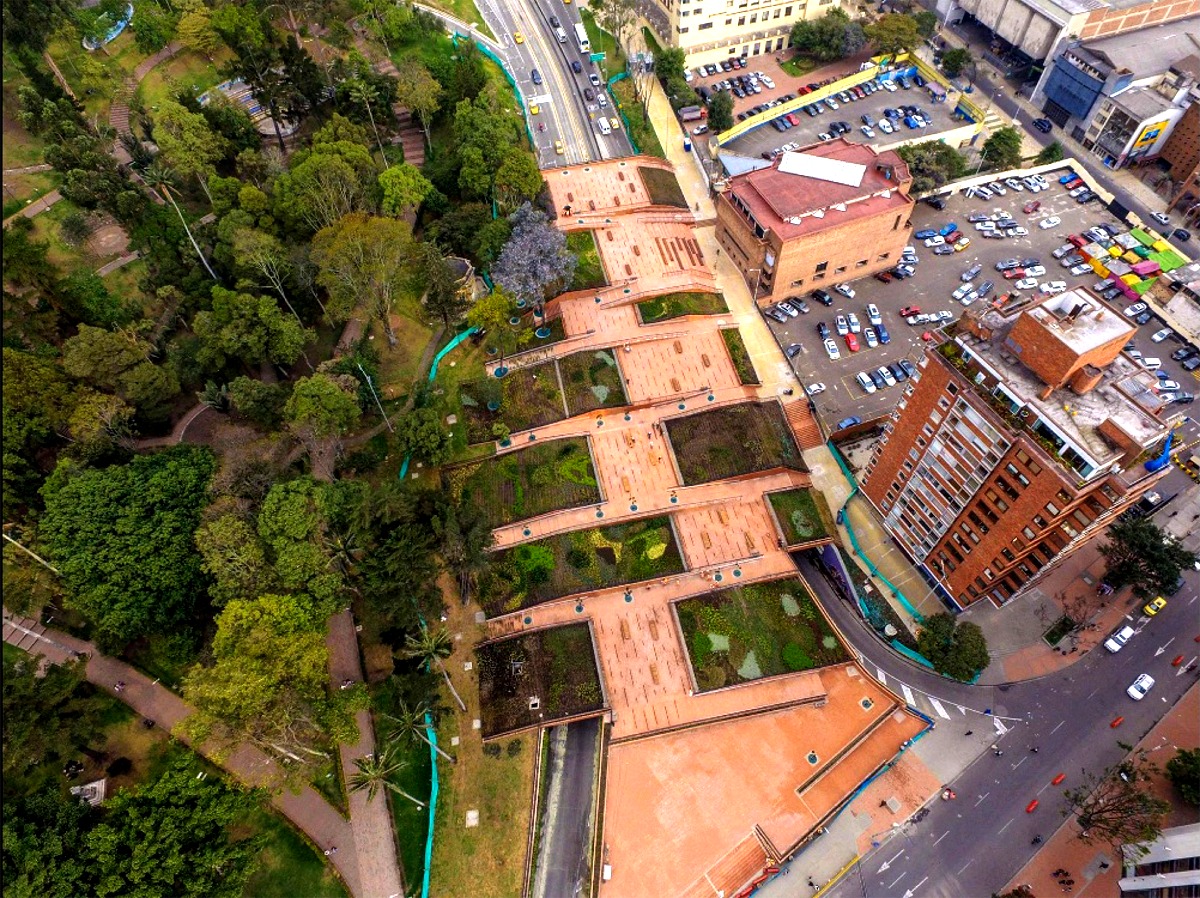 Founded in 1910, the Parque de la Independencia (Independence Park) was one of the oldest urban parks of Bogotá, but in the last few decades had started a general decline in public use due to neglect and a resulting rise of vandalism and general delinquency. In 2005, there was great interest in the creation of a space that could connect this park back to the city, making the city center a cultural hub. Thus Parque Bicentenario was conceived as a revitalization project for the downtown area of Bogotá. Designed by architect Gian Carlo Mazzanti of Grupo Mazzanti, the public space now connects the former park with the Carrera Séptima (7th Carrera), the main “pedestrian street” that links to Plaza de Bolivar, the main plaza of the downtown area and the city.

Parque Bicentenario was designed as a transition or connection from the well established natural space to one of the busiest and most eclectic streets of the city. In order to create this connection, this urban space had to pass over Avenida El Dorado or Calle 26, the main vehicular artery that connects the west of the city with the east and the airport. The morphology of the park and the social, urban, and natural interconnections of this focal point brought serious controversies, paralyzing the construction for several years.

Some local neighborhoods worried the park would lose its historic spirit. During the long construction delay period, the construction site areas surrounding the park became known for increased delinquent activities, which created a greater discord among residents and the local government. Finally, the Parque Bicentenario was inaugurated in September, 2016 and we are expectant to find out how this new project will serve the city and its inhabitants.

Parque Bicentenario is a reinforced concrete “Bridge” that adapts to the topography of the terrain and meets the vast number of urban technicisms and norms of the city. In order to transform this “Bridge” into a green public space of 4,600 m2, a series of extensive and intensive green roofs were designed resulting in eight small vegetated squares. A wide variety of native and adapted plants were selected by the Botanical Garden of Bogotá. This green roof ranges in a wide variety of slopes and evolves from the natural terrain with ancient trees at ground level to new built greenery and public space at an elevated height.

The greening of the project encompasses 41,000 plants on its green roof and around 12,000 plants on three living walls that are located on two vehicular passages which are highly visible. Inspired by pre-Colombian glyphs, the living walls were designed with the modular System Canguru® from Ecotelhado. Two vertical gardens of 120 m2 were constructed with a third measuring 160 m2, for a total area of 400 m2 – 4,306 sf (not counted in the size of the 49,514 square feet of green roof). The System Canguru® uses 16 modules per square meter with a total density of 30 plants per square meter. In addition, 700 m2 of permeable pavers were incorporated in the project, along with 39 trees.

The new Parque Bicentenario is being well-received, as its restoration has become a healing factor in the division between the south and north sectors of Bogotá. The park was presented by the city government’s “Defensoría del Espacio Público” to AsoSandiego, the local civic association, for its administration, care, and cultural activation. Public use has increased dramatically because of this alliance of co-responsibility and commitment by the local citizens and it has been used for art fairs, musical performances, as well as casual relaxation.

The Parque Bicentenario in Bogotá is challenging the city and its dwellers to adopt, enjoy, and take care of this new invigorated and clean space, and in doing so shall create a safe and highly usable public park for residents to cherish for years to come.

See the Project Profile for the Parque Bicentenario Bogotá Greenwalls in The Greenroof & Greenwall Projects Database.