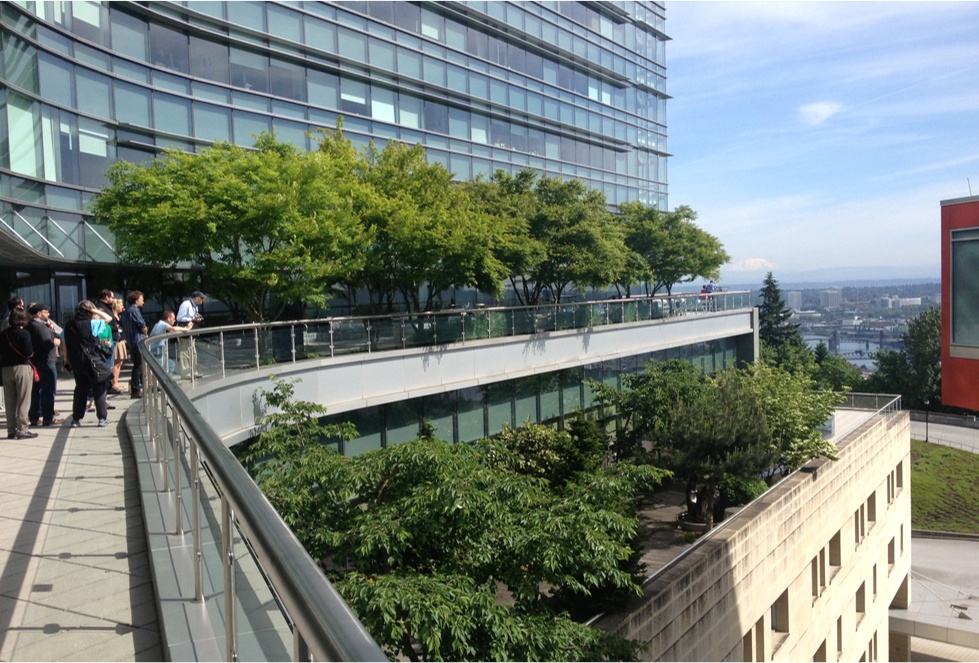 NRDC; GreenSource by Randy Gragg of October 2007. For additional information on this LEED Platinum building and how the greenroofs tie into the whole system, review the thorough case study document produced by OHSU design team member Interface Engineering (you can also see the LEED Scorecard).

Completed in October, 2006, the $165 million, 400,000 GSF Oregon Health & Science University’s (OHSU) Center for Health & Healing is an outpatient medical and research building encompassing a one block development located in Portland’s South Waterfront neighborhood – and it’s the first medical and research facility in the U.S. to receive LEED Platinum certification (NC and Operations).

“Located at the lower station of an aerial tram, the Center for Health and Healing (CHH) is the first building for Oregon Health and Science University’s new River Campus. Bringing the Science into spotlight, OHSU envisioned this building and its rooftop gardens as a way to offer cutting-edge health care and research environment for students and faculty, allowing them to blend teaching and discovery into unequaled patient-centered care,” (Walker Macy Landscape Architects, 2009).

The Oregon Health & Science University Center for Health & Healing employs a number of sustainability strategies, including photovoltaic arrays on its sunscreens, a trombe wall to collect and circulate solar heat, a gas-fueled power system, and a state of the art on-site wastewater treatment plant (membrane bioreactor – MBR) where 100% of wastewater is recycled for in-building toilet flushing, cooling tower water, and landscape irrigation, resulting in 60% reduction in potable water use.

Three eco roofs and two intensive greenroofs were added for patient, staff and visitor enjoyment as well as part of the overall stormwater strategy. Walker Macy led the design of the roof gardens (6-8″ augmented with raised planters containing 36″ depth of growing media) and eco-roofs (3-4″ of growing medium), streetscape, parking lot and temporary park on an adjacent block. Accessible intensive greenroofs are located off the 4th floor day patient’s lobby as a restorative garden, and the 5th floor off the doctors’ waiting areas which is open to staff, visitors and patients.

At the first meeting with the architects designing the Oregon Health and Science University’s Center for Health and Healing, developer Dennis Wilde posed a challenge: Reduce the capital costs for the building’s mechanical systems by 25% but make it outperform the Oregon energy code by 60%. For a simple, single-use building, Wilde’s goal would have been bold enough. But given the center’s unprecedented mix of swimming pools, a surgery suite, exam rooms, offices, and research labs – each with heating, cooling, and ventilation demands far beyond the norm – it was nothing short of audacious.

“It was impetuousness, plain and simple,” recalls Wilde, a principal at Gerding Edlen. “We habitually build buildings full of mechanical equipment that’s seldom used. Why the hell not get creative?? What the team quickly discovered is that the proverbial sum, in fact, could be much greater than the parts, particularly if you make sure most of those parts serve more than one function. Designed by GBD Architects in close collaboration with Interface Engineering, the Center for Health and Healing is a lesson in the architecture of integration.” ~ GreenSource

The green roofs are reducing the peak runoff volumes to the storm sewer, designed to store a minimal amount of water to keep the soil saturated, since the region’s climatic pattern – extremely wet winter and extremely dry summer – generate the volume of stored water that cannot equal the demand and supplemental irrigation that is needed. The stormwater network connects all rooftop gardens and the fertilizers used contain no phosphorus. The OHSU building incorporates both rainwater and groundwater collection systems on the roof and underground, which get mixed with the building’s own gray water and sent to the basement treatment system. Reclaimed water is stored in cisterns before being pumped upstairs or sent outside to irrigate the building’s grounds and rooftop gardens. Excess reclaimed water is piped into the nearby Willamette River.

“OHSU had to obtain a number of special permits to install its state-of-the-art water system, which includes a membrane bioreactor in the basement that basically is a small scale sewage plant. The result is that the building uses 60% less water than most buildings its size, and its outflow to the city sewage pipes is virtually nonexistent. Through the installation of a bioreactor on site, the building cleans 15,000 gallons of wastewater a day. Constructing the water system was expensive, despite a $50,000 grant from the Portland Office of Sustainable Development and more than $500,000 in system development charges the city waived because the building does not outflow into city sewage. OHSU estimates the system will not pay back its initial costs for at least 10 years. Meanwhile, the building’s $12,000 annual water bill is considerably less than the $80,000 to $100,000 bill OHSU estimates it would have paid without the water reclamation system. The CHH generates 2.1 million gallons annually in potable water savings.” ~ Macy Walker, Greenroofs.com

Managed by CB Richard Ellis, the Oregon Health & Science University (OHSU) Center for Health & Healing as an ENERGY STAR certified building and received The Outstanding Building of the Year Award (TOBY) in the medical office building category from the Building Owners and Managers Association (BOMA) in the 2010 international competition, the first for an Oregon facility.