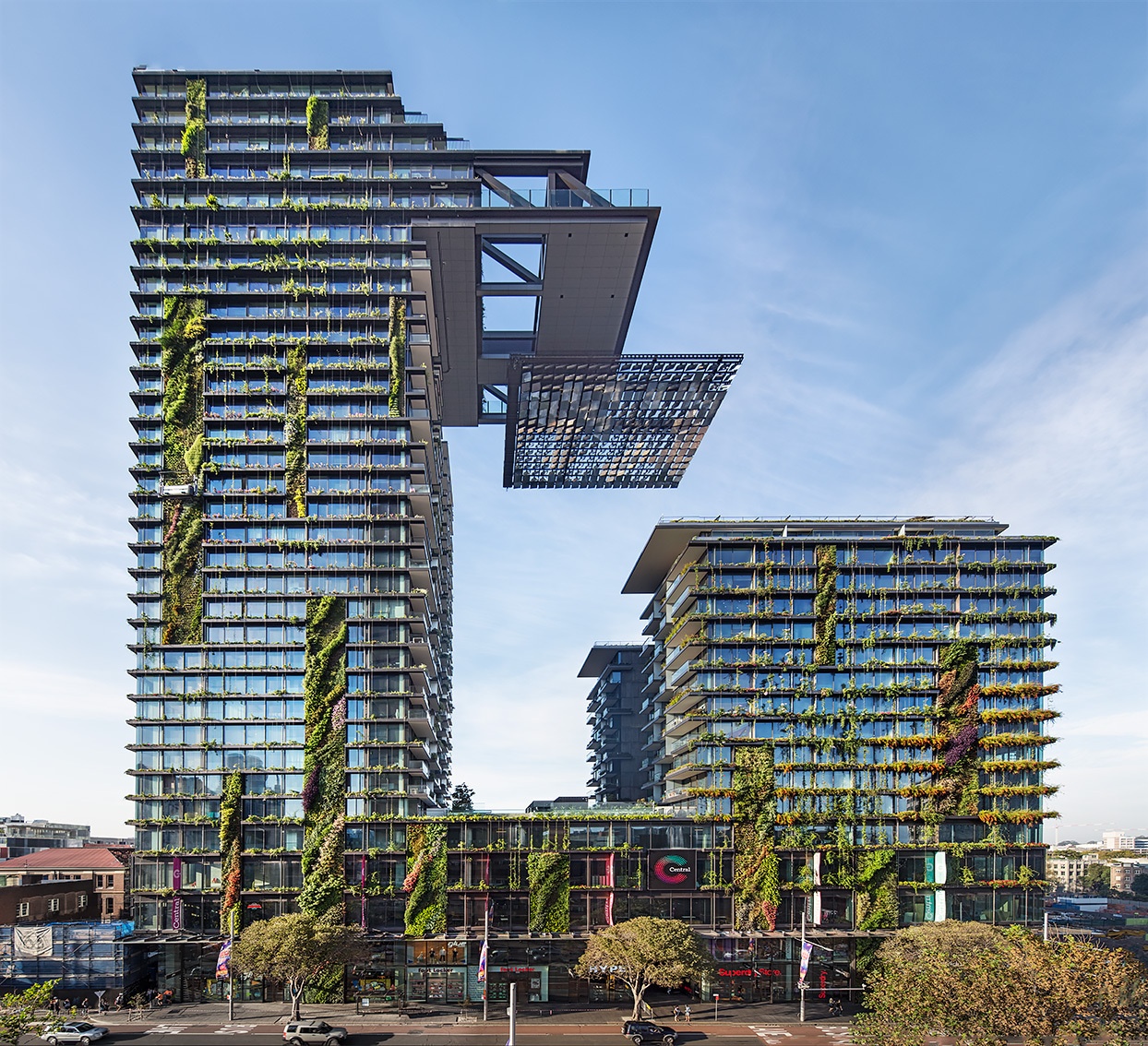 Visit the Frasers Property website about the vision of Patrick Blanc.

Learn about Jakob Rope Systems in The Greenroofs.com Directory.

June 14, 2014 7:38 video Architecture in Focus – One Central Park, Sydney where Simon Parsons, Executive Director at PTW Architects is interviewed on YouTube; November, 2012 Urban Green in Australia by Matt Dillon where the first 12 and a half minutes are devoted to One Central Park when it had just begun construction – Matthew Dillon, president of Greenroofs Australasia, also interviews Patrick Blanc; November 2012 :53 video Patrick Blanc talks about vertical gardens at One Central Park November 2012 by propertyobserver on YouTube.

Begun in 2007 and completed on schedule in 2013, social and environmental initiatives underpin One Central Park’s unique design with parkland where there previously was none. There are now approximately 64,000 square meters of landscaped areas, including the spectacular vertical gardens. The vision included creating a linkage from the southern end of the CBD and the adjacent residential areas which has contributed positively to both sectors.

The landmark East and West One Central Park Towers were designed by architect Jean Nouvel with collaborating architect PTW, creating a gateway to the south from the city. The innovative two towers feature ground-breaking architectural elements including the Sky Garden greenroof and Heliostat, and the highest greenwalls currently in the world (as of 2014) stretching 150 meters high. The building’s iconic “Sky Garden” hovers up 100 meters high and on a monumental cantilevered platform which extends 42 meters beyond the East Tower (including the Heliostat).

Dramatically setting off One Central Park, the Heliostat feature is the first of its kind used in a residential setting in Australia and the largest of its type in the world used in an urban context. Because the site sits on the north end of the property, a Heliostat arrangement with 320 glittering reflectors was devised to reflect sun from the top of the adjacent building up onto the underside of the greenroof or Sky Garden back down to the public areas. A dappled sunny environment was thus created with the charm of a forest (Simon Parsons, PTW Architects, see video below).

Designed by botanist Dr. Patrick Blanc, the symbiotic and revolutionary living walls are based on his hydroponic system. The planted walls use Patrick Blanc’s Le Mur Vegetal system, interspersed in 23 various sized panels across the facades of the two towers, spanning over 1000 square meters. Also, simple wire trellising from planter boxes were placed all around the building, encompassing about 7 kilometers for climbers and trailing plants. Plants chosen needed to be able to withstand great drying winds and strong sun on top to more shade on the lower areas close to the street.

“The public park at the heart of the precinct climbs the side of the floor-to-ceiling glass towers to form a lush 21st century canopy. Using 250 species of Australian flowers and plants, the buds and blooms of the vegetation form a musical composition on the façade. Vines and leafy foliage spring out between floors and provide the perfect frame for Sydney’s skyline…

A hovering cantilever crowns the pinnacle of One Central Park. This contains the tower’s most luxurious penthouses. Here there are a beguiling assembly of motorised mirrors that capture sunlight, and direct the rays down onto Central Park’s gardens. After dark the structure is a canvas for leading light artist Yann Kersalé’s LED art installation that carves a shimmering firework of movement in the sky. This brings a new starlit architectural shape to the One Central Park design,” (ArchDaily, 2014).

“Beyond the functional convenience, their towering green presence is also a universal signal of life on Earth. This knowledge that vegetation means life is so deeply ingrained in human perception that parks and gardens have at all times been the most desirable places to live next to,” (Architecture & Design, 2014).

Creative design solutions by the entire team have inspired other architects, designers, and developers to consider sustainable practices and envelope buildings in green. One Central Park has become a significant contribution to the area and a worthy ‘new southern gateway’ to Sydney’s CBD as a truly unique, growing building.