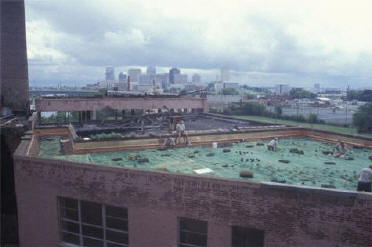 Stephen and Louis Mc Redmond and Anita Sheridan are redeveloping an abandoned slaughterhouse, the Neuhoff Meat Packing plant, located in northern Nashville, Tennessee, six blocks from the State Capitol on a rock bluff overlooking the Cumberland River. The buildings were built between 1906 and 1950, and the plant operated until 1977. The Mc Redmond’s envision a mixed-use development focused on arts and ecology and employing innovative techniques in regenerative design.

As a pilot project, the Mc Redmond’s installed a 2,600 square foot greenroof over an existing two-story building. Eric Shriner, a landscape architect based in Portland, Oregon, worked with the Mc Redmond’s to design the greenroof and put together the project team that would install it.

The initiating concept for the greenroof entailed the use of plants from the endangered Cedar Glade plant community on the project. This community is endemic to a 6-mile radius area in Central Tennessee. Cedar Glades are a harsh environment. Plants in this community grow in full sun and a shallow nutrient poor soil with a limestone base, and undergo periodic inundation followed by extended drought.

Among the many plants in this community, the Tennessee Coneflower was the first species listed under the Endangered Species Act. "Because Cedar Glades hold many similarities to a greenroof environment, we felt the plants would be well adapted to use on a rooftop in Tennessee. In a sense, we were employing architecture as a means for conservation ecology," say the Mc Redmond’s.

Mike Berkley and Terri Barnes of GroWild Inc. own a nursery specializing in southeastern native plants and have coordinated several restoration projects involving Cedar Glade plants. Their expertise proved critical in plant selection as well as the installation that was completed in October of 2002.

Houston Herbert of R.D. Herbert & Sons acted as the roofing contractor and installed the greenroof. Herbert worked with Michael Perry of Building Logics to work out the details of the Famos greenroof system used on the greenroof project.

The first phase of the project, completed in June of 2002, involved tearing off the existing leaking roof and installing a base layer system of waterproofing and insulation. This system consisted of a vapor barrier (Famobit P-3), 2" Isocyanurate (R13), ¾" Perlite Insulation (R3), and a waterproof membrane (Famobit P-4). The second phase took place over 4 days in October 2002 and involved the installation of a final, specialized membrane and flashing details, placement of a planting medium and drain aggregate, and finally the planting. The final membrane, Famogreen Ret-CUP4, consists of a modified bitumen with a copper foil sandwiched inside and hydrogel crystals held on the surface with an open weave polyester fabric. Copper foil provides protection from root penetration and hydrogel improves drought resistance. The 5" planting medium is composed of 40% pine bark, 30% peat, 15% perlite, 15% vermiculite. A biodegradable erosion control fabric was placed over the planting medium to deter erosion and to serve as a mulch during initial establishment of the planting.

A heavy 2" rain fell on the day of the planting medium installation, breaking the previous same day record of 1" set in 1946. GroWild planted over 1200 plants from 15 species.