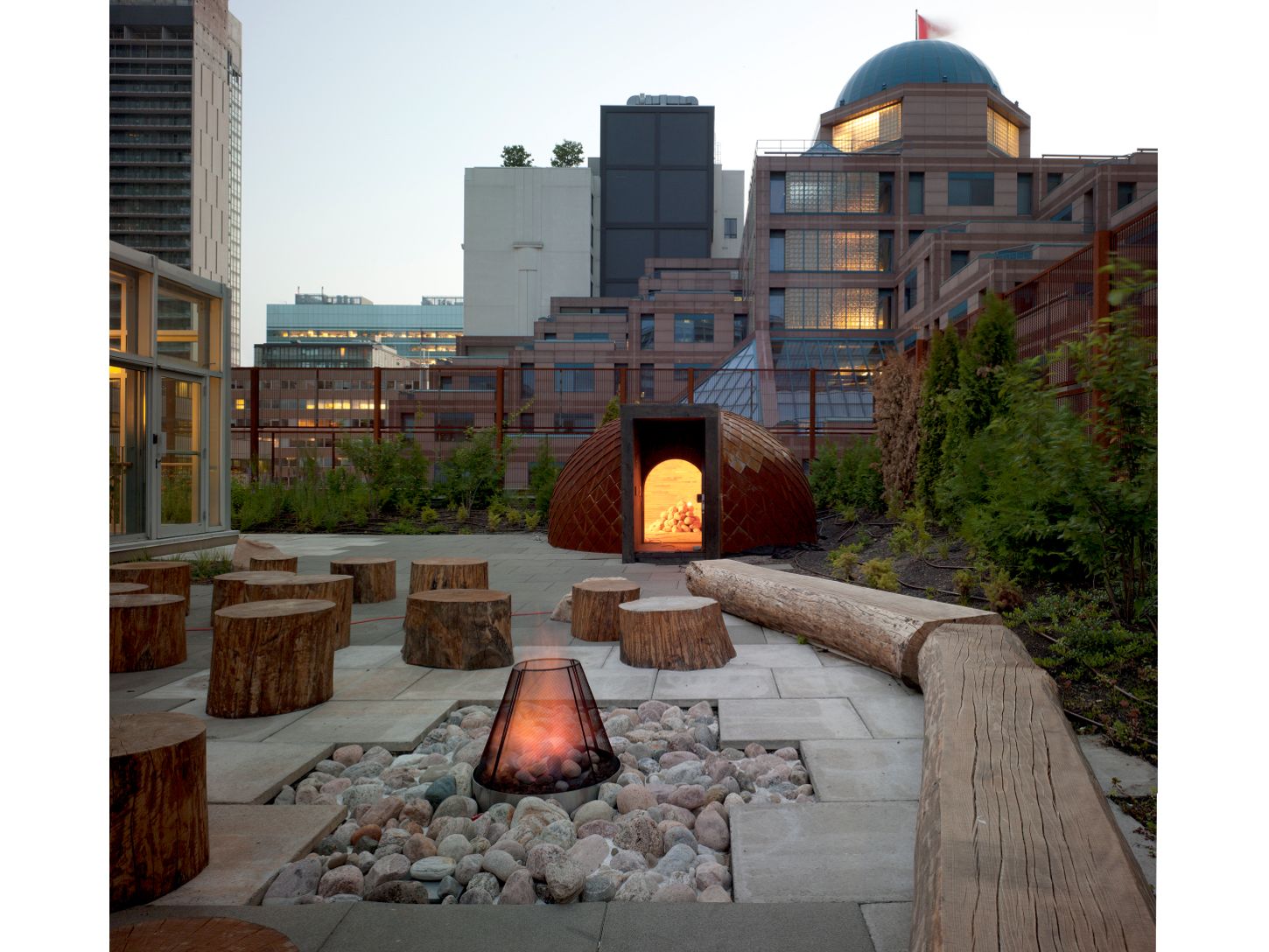 The Native Child and Family Services of Toronto was featured in the month of April in the 2013 Greenroofs & Walls of the World(TM) Calendar.

Learn about Green Innovations in the Greenroofs.com Directory.

Located in the heart of downtown Toronto, the Native Child and Family Services of Toronto (NCFST) offers social and culture-based services for aboriginal children and families within a 30,000 square foot office building. Designed by Levitt Goodman Architects (now LGA Architectural Partners), they say the challenge for this project was to create a place that would reconnect urban aboriginals with nature in the heart of the city and project a bold visual presence for the First Nations community – which was difficult to conceive for a community that is comprised of distinctive bands with their own identities and customs.

“The architects collaborated with aboriginal artists, a graphic designer and a landscape architect to define the centre with art, environmental graphics, natural materials and plantings that are native to the Great Lakes region. These features give the building its cultural identity and also soften its institutional nature,” (archdaily, 2011).

The NCFST has a unique green roof, designed as a contemporary iteration of a longhouse with a healing lodge and fire circle surrounded by a lush roof garden. These special spaces are used both formally and informally for public assemblies and ceremonies, drumming and circle sessions and for counseling, meetings and playtime (LGA Architectural Partners).

“Native Child and Family Services of Toronto is housed in a 4-storey, 2,462 m2 building that contains office space and a service/community mall where NCFST provides services to clients, such as the Early Years Centre, Community Kitchen, Youth Program, and reception. The building was unoccupied and not maintained for a number of years before NCFST purchased it in 2007. Issues included roof leaks, mould and inoperable HVAC systems. As part of the renovations, which included installing a green roof, energy-efficient lighting was installed throughout the building.

“NCFST’s first priority was to install a new roof membrane that would stop leaks and remain compatible for a future green roof. The green roof was started in 2009 and completed in 2010. NCFST decided to install a green roof, rather than a conventional roof, to facilitate traditional Aboriginal culture in their urban setting,” (NCFST).

In 1986 Native Child and Family Services of Toronto started with two staff members, a budget of $80,000 and a vision of a single point of access to vital community services for Aboriginal peoples living in Toronto. The organization’s founders were concerned by the high number of Aboriginal children in care of Children’s Aid societies and saw the need for a community service that would be family and child focused, holistic, integrated, preventative, with a strong Native cultural base as a foundation. Thirty years later NCFST has 180 staff, a budget of over $20 million and provides an array of services such as Canada’s largest Aboriginal Head Start program, residential and day camps, children’s mental health services, youth outreach services, residential care, and much more.

In 2009, the NCFST received $26,550 in funding from the City of Toronto’s Eco-Roof Incentive Program (ERIP). In 2010, NCFST celebrated the grand opening of its new home at 30 College Street. They wanted a home that would express the cultural vision of the organization, including a strong sense of environmental stewardship. A green roof seemed an obvious choice, but they wanted more than just a pretty roof garden – they wanted to make a statement about the organization and offer useable program space.

In a green roof industry dominated by designs imported from Europe and components imported from the US, Bioroof systems stands out as a company whose experiences and manufacturing are firmly based in southern Ontario, right in the NCFST’s “backyard.” Bioroof was able to provide the materials and expertise to create a plant palette that would be instantly recognizable to the Haudenosaunee (a.k.a. Iroquois) who lived on the land that would become Toronto five centuries later. Varied native perennials, shrubs, and trees were planted.

The plant palette includes the traditional Anishinaabe (a.k.a. Ojibwe and Algonquin) medicines such as cedar, sweet grass, sacred tobacco, and sage, which are harvested regularly for ceremony. At the core of the plantings is a garden of corn, beans and squash. In traditional Haudenosaunee farming practice, these three seeds were sown together in a mutually supporting relationship: the corn would support the bean stalks, the beans would act to fix nitrogen in the soil and fertilize the plants, while the wide and low leaves of the squash would keep weeds at bay and help trap moisture in the soil. So perfectly did these three plants synchronize that they were known in many Native North American languages as “The Three Sisters” and were a staple of diets in agrarian cultures all across pre-Columbian North America.

But the gardens are not just symbolic, they provide an opportunity for the city children and youth visiting the centre to learn firsthand about traditional horticulture and life ways. As well as an open air classroom, the roof is also a meeting place for the community. The accessible areas have been built with soft surface play areas, natural log seating, a fire pit, and green “teaching hills.” The heart of the roof is the Healing Lodge, a structure influenced by the traditional Anishinaabe Sweat Lodge.

The Native Child and Family Services of Toronto green roof utilizes the modular Eco-System by Bioroof which has a growing media depth range of 4 – 24″ with drip irrigation. Bioroof’s water retention capacity estimate for this green roof is 6.46 gal/sf. In addition to providing the complete green roof system Bioroof was able to provide valuable advice and consultation. Working closely with Scott Torrance (landscape architect), Boszko and Verity (general contractors) and Living Architecture (system installers), Bioroof was an integral part of the plant palette discussion as well as advising on the materials needed to retrofit such an ambitious design onto an already existing office building.

Today, four stories above the streets of Canada’s largest city, the Native Child and Family Services Centre’s green roof is forging a living link with a country’s history and a people’s traditions.