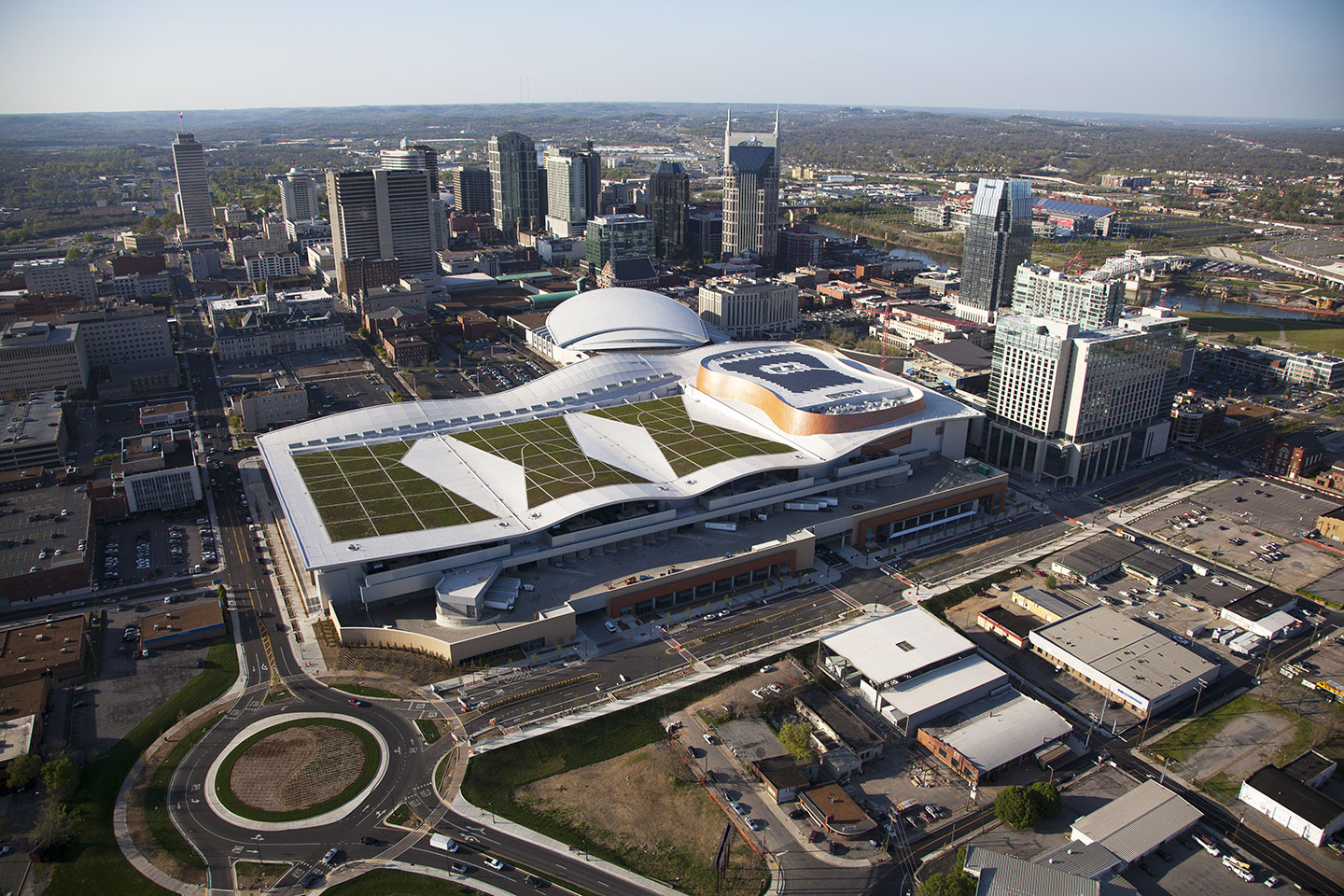 Learn about the following companies in The Greenroofs.com Directory: rooflite®; Sika Sarnafil; and Xeroflor (Bonar).

The Nashville Music City Center (or simply Music City Center, MCC) is a 1,200,000 square foot convention center completed in June, 2012 in the SoBro (South of Broadway) district in Nashville, Tennessee. Spanning three city blocks, the MCC “boasts a 350,000 square-foot exhibition hall, 60 meeting rooms, and a 57,000 square-foot grand ballroom that also is designed to serve as a music venue and an 18,000 square-foot junior ballroom. In addition, there are more than 80 pieces of art, 32 loading docks, and an 1,800-vehicle parking garage. Large skylights and a 14-story glass curtain wall system allow daylight into the exhibit hall and concourse, making the convention center a warm space from within, and an inviting presence from outside,” (Clark Construction.)

Five stories high, the wavy roof has three independent green roof sections with rooflite® soil which mimic the area’s rolling hills. The official groundbreaking for the Music City Center was held on March 22, 2010, and the new building opened in early 2013. The Music City Center makes it a part of their mission to focus on environmental sustainability and the Music City Center is LEED Gold certified for New Construction by the U.S. Green Building Council.

The new convention center hosts visitors and serves as a central meeting point for Nashville’s residents. A wide green pavilion encircles the building on all sides, calling Nashvillians to enjoy the area’s newest landmark and offers public space for art and music.

“The 191,000-square-foot greenroof was designed for stormwater retention and urban heat island reduction. It was essential that this iconic building embody the essence of “Music City, USA,” so the greenroof design represents the frets and body of a guitar—including solar panels incorporated into the design of the guitar body itself—while the roof “rolls” symbolize the rolling hills of Tennessee. From a performance perspective, the system is built to handle a 2.6-million-gallon stormwater offset. We carefully selected the most heat-tolerant, drought-tolerant plants, and we also blended and installed bioretention soil and structural soil for the greenroof as well as the surrounding grounds. Slated to receive an award from the national organization, Green Roofs for Healthy Cities, this project represents the ultimate fusion of aesthetics and engineered performance.” ~ Greenrise Technologies, 2014

The Music City Center’s structure is comprised of 13,000 tons of structural steel and 110,000 cubic yards of concrete. Although sections of the roof have zero slope (i.e., the crests and valleys), the green roof has undulating surfaces with pitches ranging from 16 – 25%, with a 65-foot difference in elevation.  This difference required slope stabilization of the media.

Since the growing media depth was shallow at less than three inches deep, pre-vegetated sedum mats from Sempergreen were specified, the principal reason being to avoid wind erosion, especially with such an exposed and thin assembly. The Anti-Slip System Type N with net and sills from Optigreen® was used to hold the rooflite® Extensive MCL substrate and the sedum mats.

In 2014 Roofmeadow wrote, “The extremely lean 2.5-inch thick green roof profile weighs in at only 17.5 pounds per square foot (at its heaviest) and is designed to maximize the time water flows horizontally through the root zone before exiting at the drains, reducing irrigation requirements.”

“Roofmeadow specified Bonar’s Enkadrain®/W 3601, a new thin drainage composite that is part of the Enkadrain family of sustainable products, as an underlayment and drainage system for the roof’s organic materials.” ~ Bonar (Xeroflor GmbH) Case History

The specific blend of rooflite soil used on the living roof was fine-tuned several times to ensure just the right mix for the vast space. Because the green roof was so large, the rooflite growing media was blown onto the roof in an easy and smooth installation process.

“From my standpoint the most important aspect of the design was the unique green roof profile, which was specifically designed for this application. The profile, that includes six structural layers, includes, bottom to top, 18 oz/sy capillary fabric (for moisture control), Bonar drainage composite (storm drainage), geogrid (for slope stabilization), media, geogrid (for wind stabilization), and pre-grown mats.” ~ Charlie Miller, 2019

Here are just some additional noteworthy Architecture and Design features:

Regarding the 845 solar panel array, its 211kW emissions offset the following over 25 years:

The Music City Center also supports bee hives on its 4-acre greenroof in order to help the bee population in Nashville flourish, provide pollinators to the many green spaces in downtown, and produce delicious honey for use in their kitchen. The hives can produce up to 200 pounds of honey each year from approximately 100,000 bees.

In FY 2019, the Music City Center collected over 3 million gallons of rainwater from its greenroof, reducing their municipal water usage by 51%. Additionally, the MCC recycled over 400,000 lbs. of mixed recycling. The Music City Center strives to be a strong community partner and donated over 40,000 lbs. to the Nashville Rescue Mission.