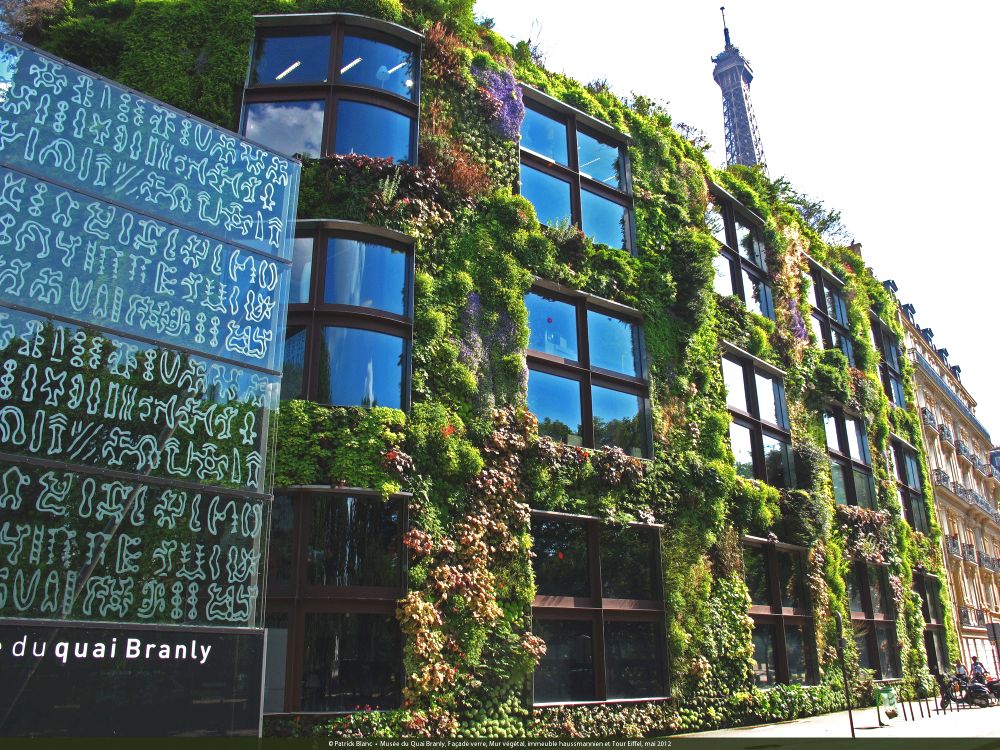 Watch the September, 2011 video of Episode #10: The Vertical Garden – from Nature to Cities: An Interview with Patrick Blanc from the Greenroofs & Walls of the World(TM) Virtual Summit 2011 which includes an interview by Linda S. Velazquez (with an introduction by Caroline Menetre) followed by the video from Patrick Blanc. Read the September 26, 2011 GPW: Musee du quai Branly by Linda Velazquez in the Sky Gardens Blog of Greenroofs.com and June 27, 2006 Quai Branly: A perverse, magical space by Nicolai Ouroussoff in the New York Times, via The International Herald Tribune.

Situated close to the Eiffel Tower, the Musee du quai Branly – Jacques Chirac, is known in English as the Quai Branly Museum – nicknamed MQB. The Paris, France museum features indigenous art, cultures and civilizations from Africa, Asia, Oceania, and the Americas. Opened in 2006, in June 2016 “Jacques Chirac” was appended to the museum’s name.

The museum complex contains several buildings, as well as a mediatheque and a garden. The building was designed by architect Jean Nouvel, and the facade measures approximately 13,000 sf (1,200 m). Yet its most noticeable feature is the stunning 200 m long by 12 m tall living wall covering the entire northwest facade.

Designed and planted by French botanist Dr. Patrick Blanc, the 650-foot-long and 40-foot high Musee du quai Branly greenwall is one of Blanc’s most famous vertical gardens, and one of the most highly photographed in the world. Facing the River Seine with a park and small streets in between, the micro-climate creates a good environment for a large variety of plants.

Patrick Blanc’s hydroponic Vertical Garden System, known as Le Mur Vegetal in French, allows both plants and buildings to live in harmony with one another, and can be implemented both inside and out.

Patrick selected “a range of species from the world’s main temperate zones, essentially from the northern hemisphere (North America, Europe, the Himalayas, China, Japan). A few of the species were collected in Korea and Japan, such as Elastostema umbellatum, Pilea petiolaris, and Ixeris stonlonifera. I also incorporated a few species from the southern hemisphere’s temperate zones, such as Berberis darwinii and B. linearifolia from Chile and Phygelius capensis from South Africa.

“It was obviously impossible to include tropical species in the Paris outdoors, on a facade with northern exposure swept by air currents from the Seine. Yet I insisted that the biodiversity represented in this vertical garden echo the cultural diversity of artists the world over, whose works were on exhibit in that very museum,” (The Vertical Garden, 2008).

Writing in The New York Times article entitled “Quai Branly: A perverse, magical space” Nicolai Ouroussoff said, “By contrast, the exterior of the administration building is swallowed up by a vertical carpet of exotic plants punctured by big windows. On some stories, the plants invade the building, crawling down the interior walls. (“When you put in little flowers, people are happy,” Nouvel said of his design.)”