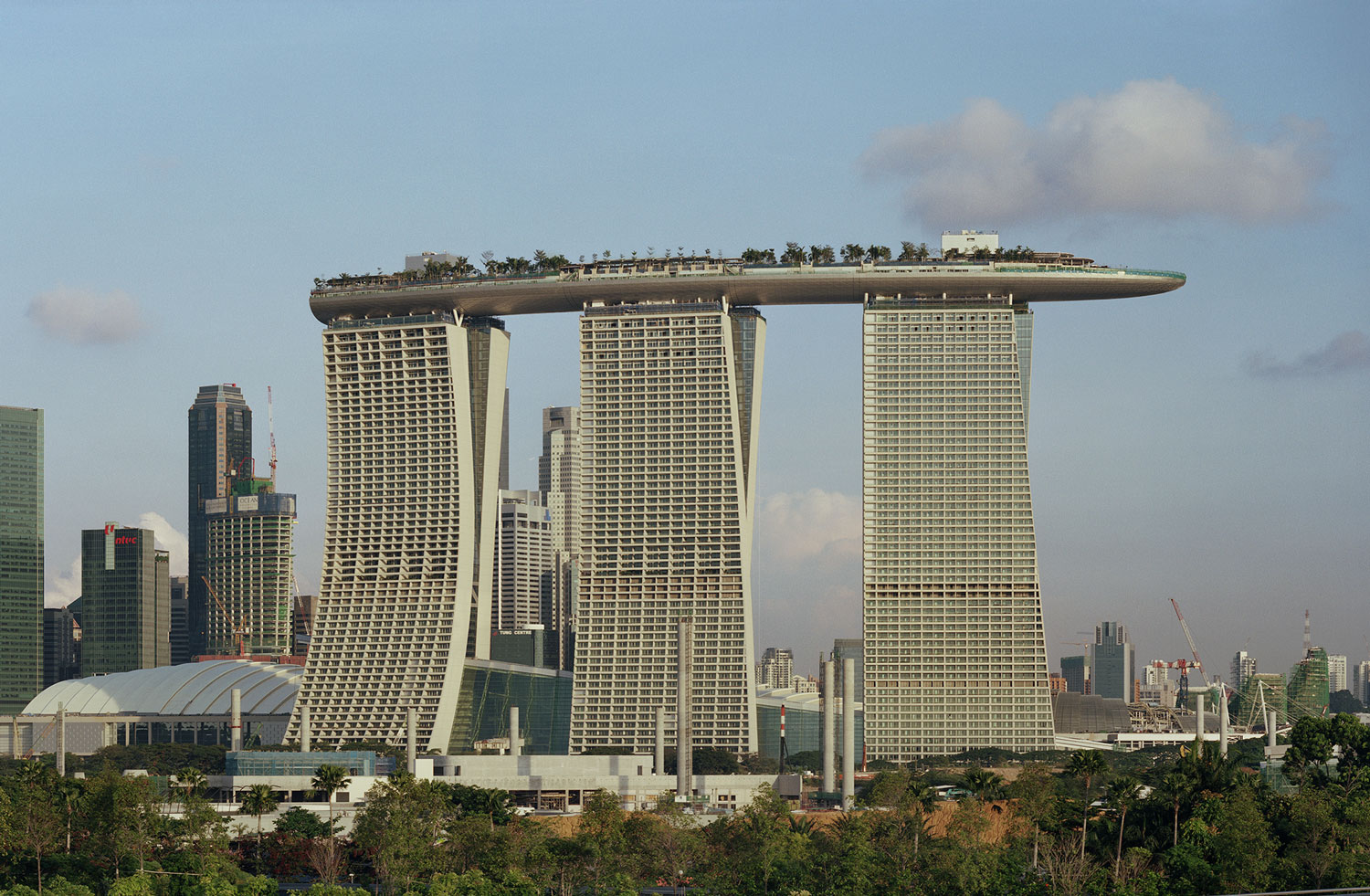 Visit the Marina Bay Sands Integrated Resort website and the SkyPark page. While the Observation Deck is open daily to hotel guests and ticketed visitors, it is subject to availability and may be closed on certain days or times due to private events.

Watch the 2:35 Marina Bay Sands SkyPark – Project of the Week 11/2/15 video from Greenroofs.com on the greenroofsTV channel on YouTube. Greenroofs.com Project of the Week video photo credits: All courtesy of Safdie Architects by Timothy Hursley and MBS Visual Media, Marina Bay Sands, and Linda S. Velazquez except for the View of Singapore Flyer from the SkyPark by chensiyuan and Marina Bay Sands Singapore by Someformofhuman using CC-BY-SA-3.0 on Wikipedia. See the November 2012 26:35 The Marina Bay Sands Integrated Resort by Jaron Lubin, Safdie Architects Principal, from the Greenroofs & Walls of the World™ Virtual Summit 2013, filmed at the November 2012 INTERNATIONAL GREEN CONFERENCE in Bangalore, India, organized by the Indian Green Infrastructure Network (IGIN).

Designed by internationally renowned architect Moshe Safdie for the Las Vegas Sands Corporation, the $5.7 billion dollar ($8 billion Singapore dollar) – including land – 929,000 square meter (10 million square-foot) Marina Bay Sands Integrated Resort urban district anchors the Singapore waterfront, creates a gateway to Singapore, and provides a dynamic setting for a vibrant public life. Engineering firm Arup described the integration of the varied and advanced technologies as the ‘most difficult to carry out in the whole world.’ Marina Bay Sands is the largest single Green Mark Building in Singapore to be certified (as of September 2013).

Located on the Marina Bay waterfront, the Marina Bay Sands is a 16-hectare (38-acre) mixed-use integrated resort, organized around principal axes that extend into the surrounding urban fabric. Both the north–south promenade and the grand arcade traverse the entire project and are crossed by two east–west spines (view corridors), which connect the Gardens by the Bay, the local metro station, Bayfront Avenue, and the waterfront.

Marina Bay Sands combines more than 121,000 square meters (nearly 1.3 million square feet) of world-class convention and exhibition facilities; three 55-story hotel towers containing 2,560 rooms in total; a 1.2-hectare (3-acre) Sands SkyPark capping the towers, which offers 360-degree views of the city and sea and outdoor amenities for the hotel including a swimming pool, restaurants and gardens; an iconic Museum of ArtScience on the promontory; two state-of-the-art theaters to accommodate 4000 people; a casino; a wide array of shopping and dining outlets; and an outdoor event plaza along the promenade.

As part of the continuous necklace of activities surrounding Marina Bay, the complex forms a gateway to the city. Seen from ships anchored at sea, the two windows created by the towers and sky park frame the vistas towards downtown Singapore. Viewed from this vantage point, the Marina Bay Sands Integrated Resort’s foreground – composed of the Museum of ArtScience, the promenade and undulating roof structures – serves as a base from which the hotel towers rise, curving skyward. A series of layered gardens extends the tropical garden landscape from Gardens by the Bay towards the bayfront.

The world’s most expensive casino hotel, the 55-floor Marina Bay Sands Integrated Resort consists of three towers standing 650 feet high. Its crowning engineering achievement is the Sands SkyPark® which tops the complex with a 340-metre-long (1,120 ft) SkyPark with a capacity of 3,900 people and a 150-metre (490 ft) infinity swimming pool, set on top of the world’s largest public cantilevered platform, which overhangs the north tower by 67 metres (220 ft).

There are four movement joints beneath the main pools, designed to help them withstand the natural motion of the towers, and each joint has a unique range of motion. The total range of motion is 500 millimetres (19.68 inches). In addition to wind, the hotel towers are also subject to settlement in the earth over time, so engineers built and installed custom jack legs to allow for future adjustment at more than 500 points beneath the pool system. This jacking system is important primarily to ensure the infinity edge of the pool continues to function properly. The pools are made up of 422,000 pounds of stainless steel and can hold 376,500 gallons (1,424 cubic metres) of water.

Moshe Safdie designed an Art Path within the resort, incorporating installations by five artists including Zheng Chongbin, Antony Gormley, and Sol LeWitt. The pieces are meant to play on environmental influences including light, water and wind, integrating art with architecture.

The lush greenroof oasis is located on level 57 and features the world’s largest rooftop pool stretching 150 meters across the Sands SkyPark. Accessible only by hotel guests, the iconic Infinity Pool at Marina Bay Sands offers a breathtaking city-skyline view not found at any other Singapore hotel. The SkyPark also has rooftop restaurants such as CÉ LA VI , Flight Bar & Lounge, Sky on 57 by Justin Quek, and Spago by Wolfgang Puck as well as nightclubs such as KU DÉ TA.

Experience fine dining or have a drink 57 stories above on the breathtaking Marina Bay Sands Integrated Resort SkyPark®. Take in the stunning city skyline from the public observation deck with the best 360-degree panoramic views. From Marina South Pier all the way out to the Singapore Strait, visitors can observe the bustling shipping lanes that have built Singapore’s rich multicultural history.