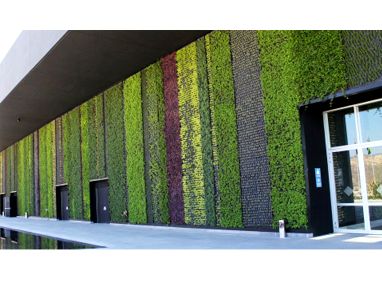 The newly constructed Los Cabos International Convention Center (ICC) covers an area of 25,922 m2 and has the capacity to host events for up to 6,400 people in 3 exhibition halls and 7 conference rooms. The U.S. Federal Government commissioned FREE to design and build the convention center and hotel for the 2012 G20 Convention in Los Cabos, Mexico held in June. Located in an arid region, the state-of-the-art green facility boasts many green building techniques including 1,008 solar panels, a roof design that allows 18% of natural light to enter through domes, LED lighting throughout the interior, and both exterior and interior greenwalls. A 2.65 liter per second MyFAST wastewater treatment system was also installed to recycle treated water back to the building for toilet flushing and irrigating the current world?s largest alleged living green wall [2,700 m2 as of September, 2012].

The recent 2012 G20 Summit hosted twenty leaders from the world?s most powerful economies. As the first such summit to occur in Latin America, new infrastructure and a new convention center in Cabo San Lucas was necessary. FREE developed a building system adaptable to different climates, from which they created a hotel that is suitable in four different climates along the Mexican Pacific Ocean.

The Convention Center represents a $100,000,000 investment by the federal government and a $1,500,000 investment from the state of Baja California Sur, and the ICC was built with the G20 agenda in mind. Namely, a focus on green infrastructure, energy and water efficiency, and financing the fight against climate change. According to project?s consulting engineers, ICA Construcci?n Urbana, the Center was built in a record time of six and a half months. The project began on November 15, 2011 and was completed on May 31 2012. Usually, a project of this nature takes approximately two years to be completed.

About the Decentralized Wastewater Treatment Plant from Bio-Microbics: “The ICC is a ?green? facility, literally! The building is completely engulfed in the ?Living Green Wall,? which is the symbol of ?green-building design? under which the complex was built and features local flora. Equipped with a 2.65 liter per second MyFAST treatment plant (utilizing fixed integrated treatment technology and no costly membranes to maintain) hidden beneath the parking lot and a storm water tank to capture rainwater, the water is piped to the local wastewater treatment plant where it undergoes treatment to meet high standards for irrigating the green areas and toilet flushing. The building?s hydroponic ?Green Wall? naturally cools down the entire building, thereby reduces energy costs.

In order to maintain the best effluent quality, piping under the MyFAST treatment units siphon settled biological sludge into a Biosolids Management System (BMS), located in a third compartment, for further treatment of sludge. This BMS zone (also called a digester) creates an aerobic environment to help further treat and reduce the sludge content. The treated effluent is then recycled back to the building.

“The importance of sustaining water sources is evident in nearly every newly constructed building (whether seeking green building certifications or not) for future generations. The G20 Summit focused on many issues related to solving the world?s economic crisis and political landscapes. With the example of the Los Cabos The International Convention Center in San Lucas, Baja California Sur, Mexico, it is at least a step in the right direction for sustainable, green building design and promoting best management practices ? especially with regard to water reuse,” (Bio-Microbics, 2012).

The Los Cabos International Convention Center was shortlisted as Obras 2012 ?Project of the Year.?