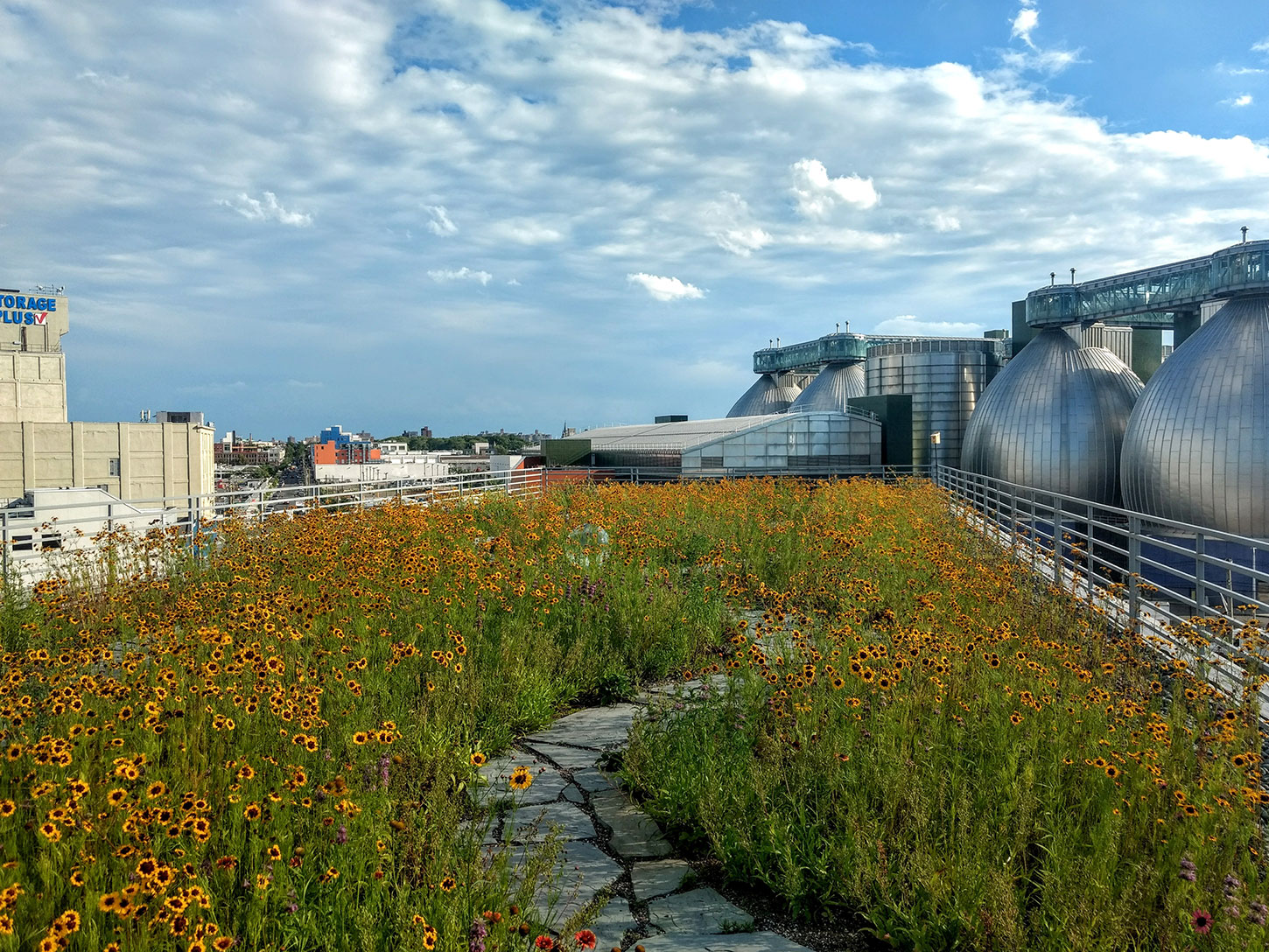 Learn about rooflite in The Greenroofs.com Directory.

Kingsland Wildflowers Green Roof & Community Space is the best example of a creative partnership, an inspiring vision, and an urban transformation for the benefit of the community. This project was first created in the mind of Marni Majorelle, founder of Alive Structures, who brought together local businesses and non-profit organizations in joining efforts to create this community space.

The green roof is located in a highly industrial area in Greenpoint, North Brooklyn. Installed on top of a movie studio, it sits across from a sewage treatment plant, next to a recycling facility and a petroleum storage lot, and along Newtown Creek – EPA Superfund site and one of the most polluted bodies of water in New York City.

The green roof oasis acts as a natural habitat – a habitat expansion program – to foster local bird and wildlife populations in New York City. Yet Newtown Creek is the site of one of the largest oil spills in U.S. history, happening as early at 1948 although spotted by a Coast Guard helicopter in 1978. As part of a settlement with ExxonMobil, the green roof project was funded by the Attorney General’s office through the Greenpoint Community Environmental Fund. The funds were then distributed through NYC Audubon and finally the project kicked off in 2016.

Organized by Alive Structures and led by Marni Majorelle, the project was truly a collaboration of a landscape designer’s vision, community, and non-profit groups who believe in a sustainable and bright future for the neighborhood. In April 2016 Alive Structures and NYC Audubon acquired GCEF funding alongside matching funds from Broadway Stages.

The space for the green roof was donated by Tony Argento, founder of Broadway Stages, a local film and production company. In addition to Broadway Stages, other important partners include: NYC Audubon who manages the project and oversees green roof wildlife monitoring through bat and bird microphones and swallow houses installed on the green roof; and Newtown Creek Alliance, a community-based organization working to restore, reveal and revitalize Newtown Creek and also conducts research into land use, policy, and economic factors of green roof installation in industrial areas.

Additional support has been received from Fortune Society, which supports successful reentry into society from incarceration and provided 10 workers to install the green roof; New York State Pollution Institute, Pratt Center, and the Open Sewer Atlas.

The design, led by Marni Majorelle and Alive Structures, features plants specifically selected to attract birds and other wildlife with species native to New York. Species include native grasses such as Purple Lovegrass and Prairie Dropseed, and herbaceous perennials Stout Blue-Eyed Grass, Heart-leaf Golden Alexanders, and Asclepias tuberosa (Butterfly Weed), which is used as a host plant for monarch butterflies and produces silky seed pod fibers used by Baltimore Orioles and American Goldfinches in nesting.

The wildflower meadow is supported by ultralite growing media, provided by rooflite. The rooflite semi-intensive 500 series is a very lightweight growth media with all of the same benefits as heavier growing media, including free drainage, water retention, nutrient-rich makeup, and high cation exchange, without the additional weight. The media allows this unique green roof to thrive in this urban and industrial area, providing environmental benefits, including stormwater management, to the local community.

Designed by artist Allison Armour, a lovely Aqualens Sphere Water Fountain graces Kingsland Wildflowers. Set within a stainless steel platform and dish, the globe is filled and overflowing with water. Nestled amidst the winding New York State Bluestone walkway, the Aqualens is a popular focal point of the green roof garden.