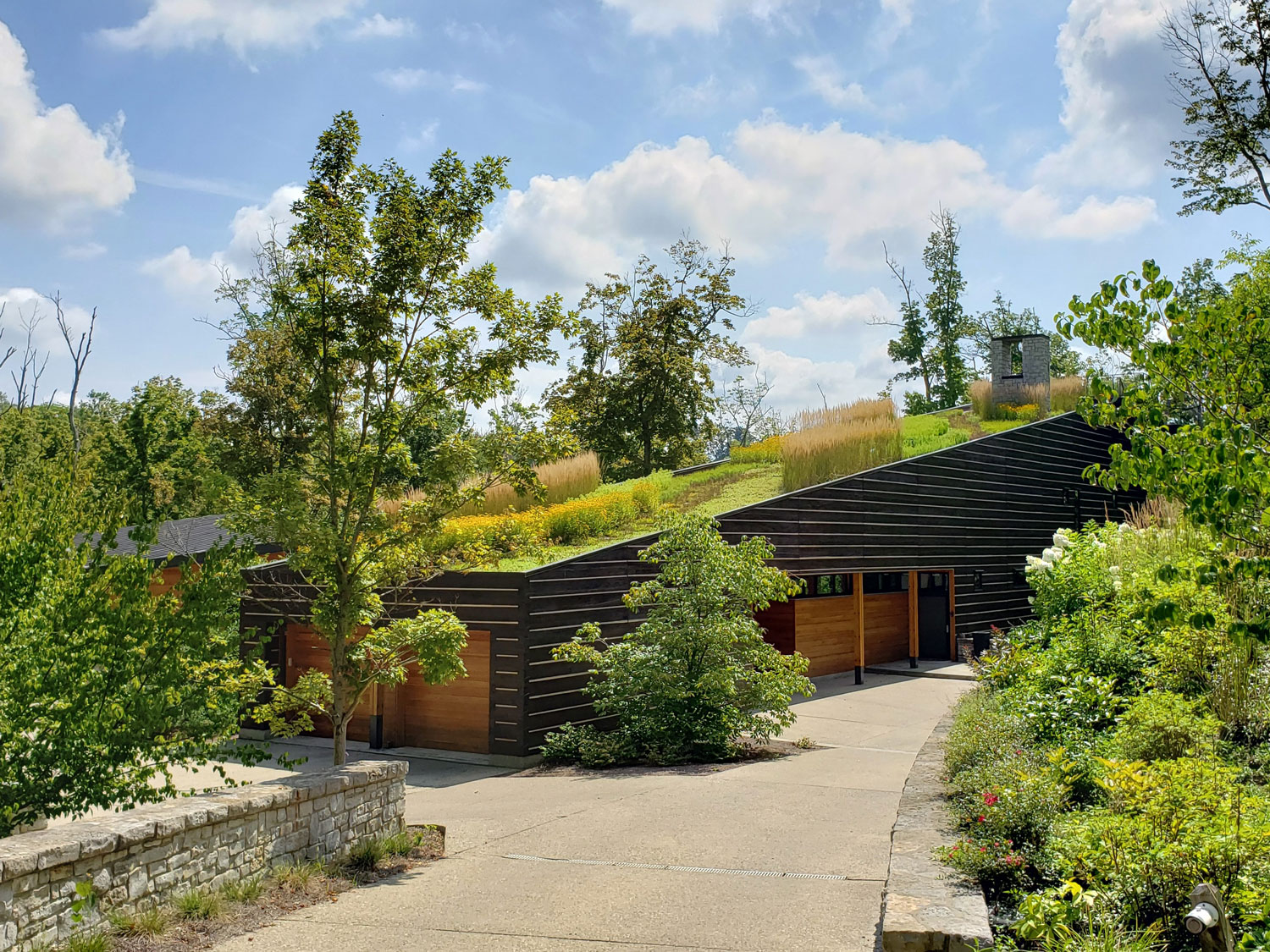 Learn about the following companies in the Greenroofs.com Directory: rooflite®and Green City Resources.

Located in a suburb of the Greater Cincinnati area with forested slopes and clear streams, the functional and highly aesthetic Indian Hill House Green Roof has been the talk of the neighbors.

Stride Studios: Our Indian Hill House client desired a change to the vegetation on her existing green roof. The roof, which had been planted when the house was built in 2003, was inundated with weeds and invasive plants and was not as dramatic looking as she dreamt it could be. Green “yes,” but boring.

We decided to use a ‘firm monoculture block’ planting style, massing the same plant in large segregated groups or blocks, in a curved linear design theme.

Although the home was very contemporary in style and could have supported a straight linear design theme, we settled on a curvilinear theme because it better reflected the organic nature of the spaces immediately adjacent to the home. The existing landscape, which was also designed by Stride Studios, is not a traditional style planting, but very naturalistic.  One of the home’s assets is that it is nestled into a wooded hillside spanning a creek. The rock lined creek splits the house in half as it makes it way from one side of the house to the other. The plantings located around the house are very organic and freeform in design. The home and property in general are very dramatic so we felt that the green roof had to match the drama.

Due to the shallow soil bed consistent across the entire roof, six inches in depth, we were restricted to using perennials, small grasses and ground covers. We chose plants that had interest year round including the winter months where many plants go dormant during our Ohio winters. Because our client lived in the home year round it was imperative that the roof was interesting year round. We decided to include multiple groupings of feather reed grasses, native Rudbeckia and Coreopsis. We combined upright sedum groupings with mixed masses of three separate species of ground cover sedums. All of the plants we chose have either a structural component or colorful features in the winter months. The three different ground sedums turn different shades of yellow, orange and red throughout the winter season while most perennials and grasses are different shades of brown and gray.

The roof has a series of stepping stones extending around the entire perimeter of the home; however, due to the close proximity to the roof’s edge and no guardrails, the path was dangerous to negotiate. Using a curved linear stepping stone path of Pennsylvania quartzite tiles through the center of the roof gave it a visually pleasing and safer route.

The painted aluminum vegetable boxes we designed and fabricated for the upper end of the green roof matched the style of metal work inherent to the home’s exterior features. Toward the upper end of the roof is a steel mezzanine that is used to access the roof from the floors below. The area of roof that is located between the mezzanine and the upper edge of the roof was dedicated to vegetables, strawberries and cut flowers. Due to the sun exposure and good drainage that the roof provides, we bordered the upper vegetated roof area with lavender borders that our client can cut and harvest.

“As you can see by the before picture the roof was mainly overgrown with weeds and grasses. We spent the spring and first part of summer turning the soil over with shovels to kill the existing vegetation. After it had dried sufficiently we removed 5 truckloads of old biomass and added back a little soil to compensate for what we had lost. A lift could only reach to the middle section of the roof, so the soil had to be brought up via buckets. Placement of the stone pavers came next, so that we could make our way up and down the roof without compacting the soil. The fabricated vegetable boxes went in the upper roof area next, adding an additional 6” of rooflite® Ag Soil bringing the boxes up to a 12” depth.

A variety of tomatoes, cucumbers, squash, strawberries, onions, herbs, zinnias and dahlias filled the boxes. At the top of the roof we placed a soldier course of lavender “Phenomenal” – a beautiful barrier to deter anyone from getting to close to the top edge. We stuck with tried and true perennials that would give year round interest, but were also tough enough for our harsh Ohio winters. Karl Foerster grasses make an impactful curve giving our flat roof some height. Coreopsis “Zagreb” gives us our bright spring color as well as Sedum “John Creech” with its bright pink blooms. Mid-summer Sedums “Angelina” and “Fuldaglut” chime in while Rudbeckia “Little Suzie” starts her show going all the way into fall. Sedum “Autumn Joy” starts out with white blooms turning to dark rust by the end of fall.

The cleanup of the Indian Hill House roof isn’t done until spring, leaving beautiful shades of amber for winter interest, but also giving aid to invertebrates and wildlife to nest.” ~ Green City Resources

The result of a successful design and installation team, the Indian Hill House Green Roof Rehab has been a wonderful accent to the Ohio home and an impressive addition to the overall feeling of the lushly wooded property.