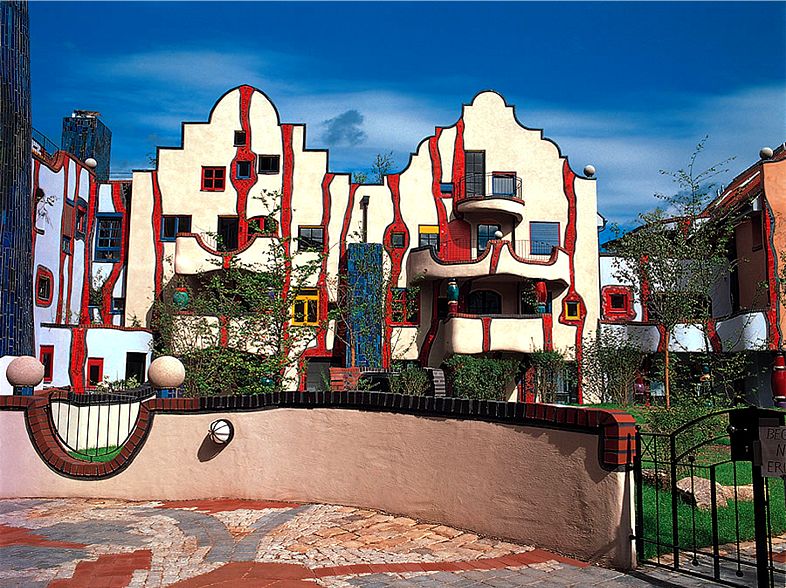 “From 1985 to 1990, the architects Heinz M. Springmann and Siegfried Kaltenbach housing construction of South Market Street in Plochingen. Their solution for the area located at the traffic intersection was a complex with an interior courtyard in which shops were also integrated. At the request of the mayor and the building sponsor, Hundertwasser was invited to design the interior courtyard. Hundertwasser declared his willingness to do so on the condition that he designed the interior courtyard, including the interior facade, as a unit,” (Living Beneath the Rain Tower, Plochingen).Situated within a lovely southern Germany-style live-work-play development, the Austrian architect Hundertwasser designed this Gaudi-inspired private lush green complex. The largest intensive greenroof is a courtyard located over a supermarket. Approximately 50 greenroofs occupy the colorful, wavy, very organically designed and tiled wavy buildings and interior spaces, including the smallest over a doorway at just two m?.

The charming pedestrian friendly village itself is a mixture of architectural styles, and just as green as the Hundertwasserhaus, but in different ways, including innovative drainage channels, fountains, green poles, green walls and flowering baskets and containers everywhere. The Hundertwasserhaus in Plochingen is definitely a must see experience.