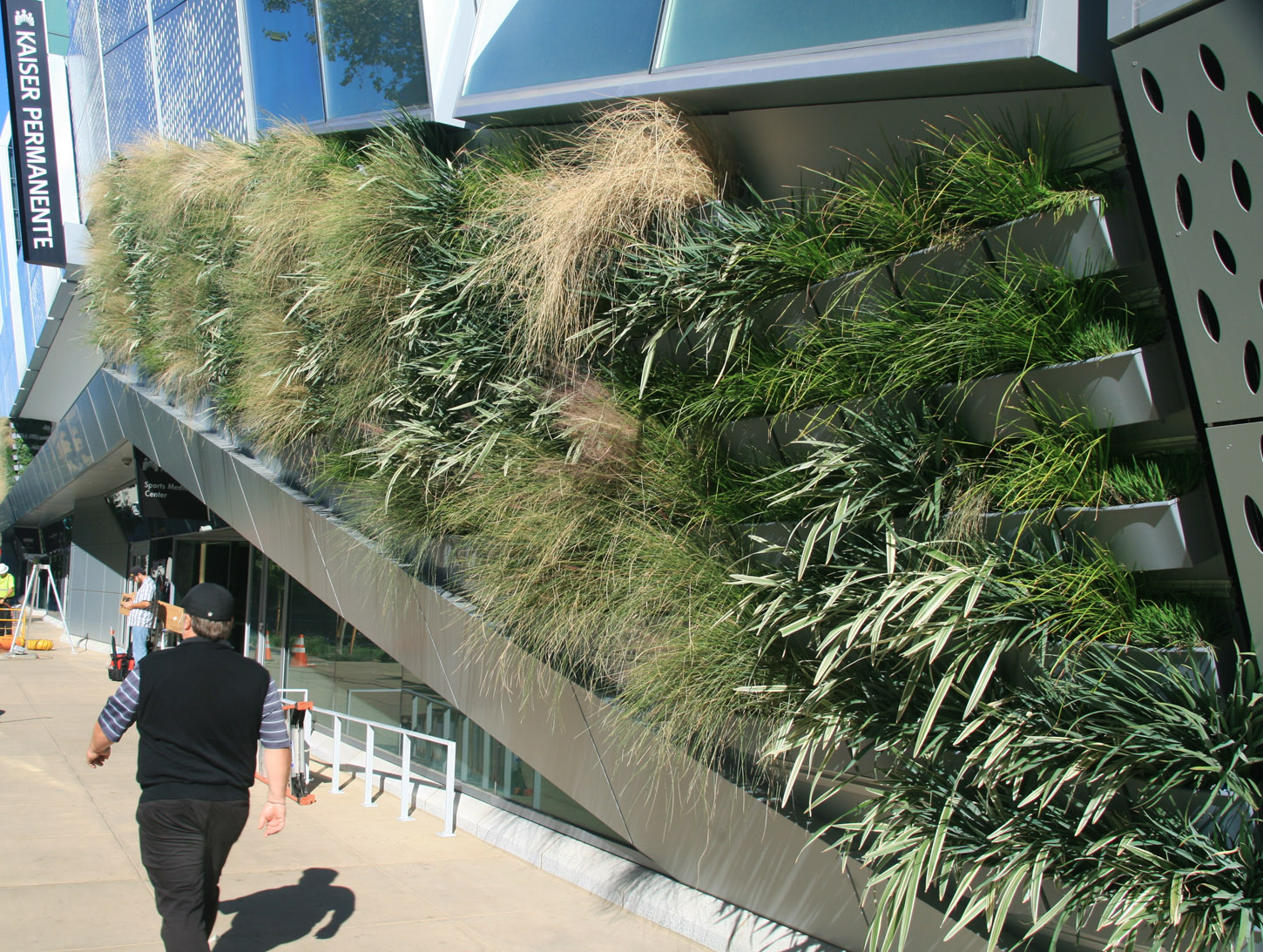 Learn about LiveWall in the Greenroofs.com Directory.

Golden 1 Center is a $558.2 million multi-purpose indoor arena in the heart of downtown Sacramento, California located partially on the site of the former Downtown Plaza shopping center. The publicly owned arena is part of a business and entertainment district called Downtown Commons, otherwise known as DoCo, which includes a $250 million 16-story mixed-use tower. The world’s first indoor sports venue certified LEED Platinum, the Golden 1 Center is the brand new home of the NBA’s Sacramento Kings and features seven sections of LiveWall® green walls.

“We reversed the typical introverted arena with a design that reflects the region and connects to the city,” said Rob Rothblatt, exterior design lead, AECOM. “The sunken bowl design, with seats below street level, fits Golden 1 into the site rather than dominating over it. The large glass hangar doors make the interior visible from the outside. The doors open out onto the plaza, which serves as a welcoming and active space on game days and year-round with civic art, outdoor seating, shade trees and rain gardens.”

Regional inspiration design: façade evokes the granite and grandeur of the Sierra Nevada with vertical striations of silver-grey glass and perforated/reflective metal panels that constantly change appearance as the light changes; leaf etchings on the façade, a green wall at the base of the building, and walnut grove reflect “the city of a million trees” ~ AECOM

“The Kings set out to build the most sustainable indoor arena in the world. With the help of AECOM, we were able to redefine how an arena’s footprint affects its environment and community,” said Chris Granger, president of the Kings. “Our green walls, a natural outgrowth of our commitment to sustainability, are a prominent feature of Golden 1. They extend the landscape from the plaza up to the walls of the arena itself.”

“The inspired idea was to make the building look as if it rests on the green wall, grounding the arena on the landscape,” said James Haig Streeter, landscape design lead, AECOM. “As people walk into the arena, they see living bands of green that change with different sections displaying different plants based on the varying patterns of sun and shade around the building.”

Also visible at the Golden 1 Center are rotating and permanent artwork displays; the Center has a robust arts commitment and represents the largest contribution of public art in Sacramento history. In December 2017 the Sacramento Kings and the Sacramento Metropolitan Arts Commission unveiled a new public art exhibition. Multimedia works created by Sacramento State New Media Art students are featured at the arena’s Grand Entrance on two custom 25-foot LED screens, next to the iconic six-story hangar doors and the greenwalls.

In addition to the multiple green walls, key sustainability metrics for Golden 1 Center include:

Completed in September 2016, the seven sections of the Golden 1 Center green wall vary in dimensions and total 4,800 square feet and include 2,700 LiveWall modular planters in a custom platinum color. With a slope of about 10 degrees, they feature 18 different types of plants and 5,400 plants in total, watered with LiveWall Outdoor – Automatic Irrigation. All flowering plants bloom in shades of purple, the Kings’ signature color. Publicly accessible, the green walls are visible from multiple vantage points around the arena.

Whether installed indoors or outdoors, green walls are visually appealing and inviting, inspiring and healthful, and beneficial to the environment.