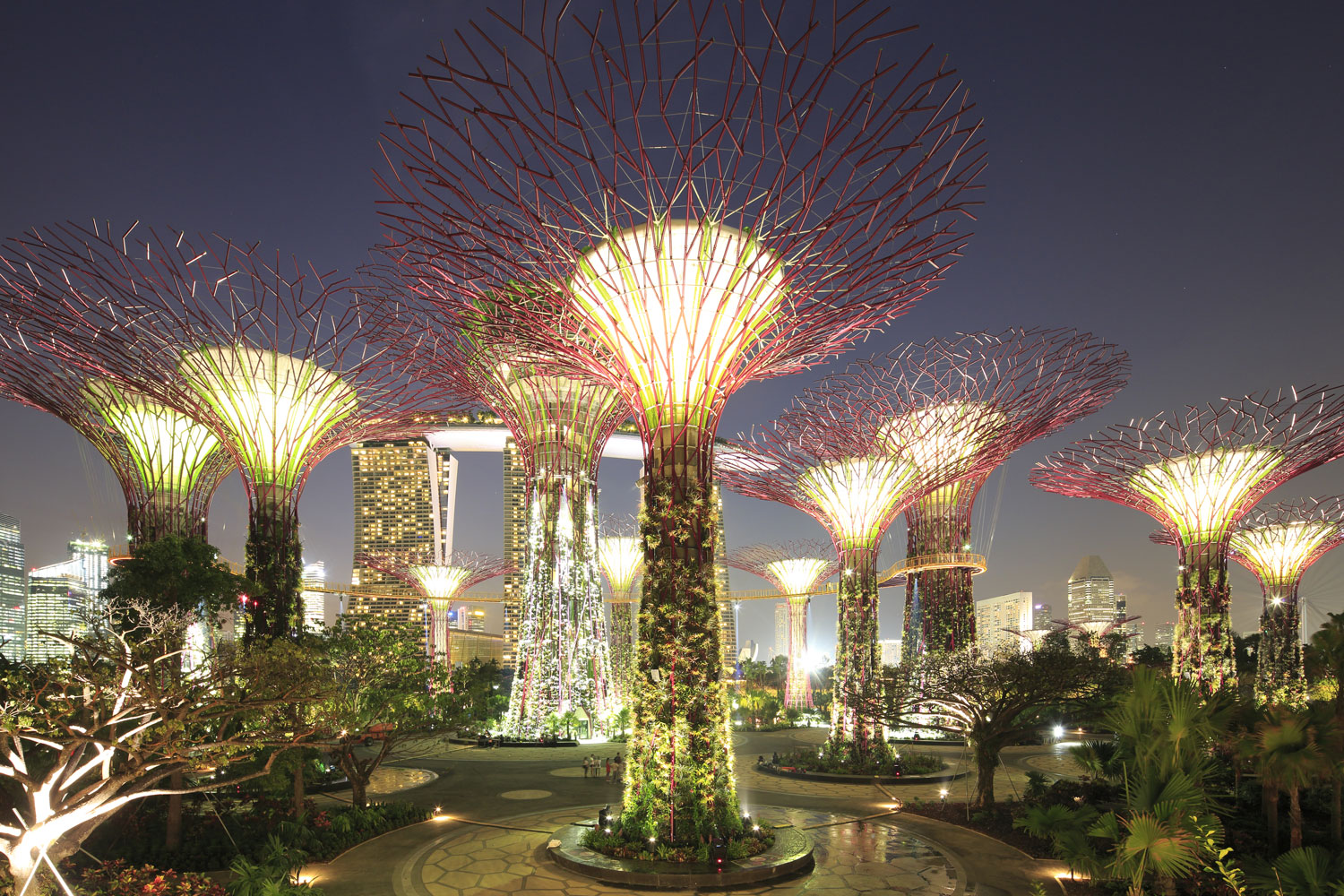 Visit the Gardens by the Bay website and learn about their Sustainability Efforts.

The 42:57 video VS2011#29 – Closing Keynote Address by Andrew Grant from the Greenroofs.com inaugural 2011 Greenroofs & Walls of the World(TM) Virtual Summit is about the planning and design of the almost then finished Gardens by the Bay in 2012. Landscape Architect Andrew Grant’s presentation shows the scope, content, and progress of this spectacular 101-hectare project with particular reference to the innovative use of vertical planting and ecological management systems.

Gardens by the Bay brings to life the National Parks Board Singapore’s vision of creating a City in a Garden. The 101-hectare Gardens capture the essence of Singapore as the premier tropical Garden City with the perfect environment in which to live and work – making Singapore a leading global city of the 21st century. The project has been acclaimed worldwide for its remarkable blend of nature, technology, environmental management and imagination and is a showcase of horticulture and garden artistry that brings the world of plants to Singapore and presents Singapore to the World.

“First conceived by Dr Kiat W. Tan, botanist and former chief executive of Gardens by the Bay, the idea of constructing a world-class garden in the tropics, on reclaimed land, south of Singapore’s financial centre, seemed completely outrageous at the time.

It is hard to imagine that this horticultural destination was once sea, then sand and soggy soil. Yet, in a relatively short five years up to its official opening in 2012, an inter-disciplinary team of international and local architects, engineers, and landscape specialists successfully transformed a barren site bereft of roads, drains and electricity into a lush green space where over 1 million plants reside. Plants, trees and flowers from every continent, except for Antarctica, can be found in the Gardens.” ~ BBC

Consisting of three waterfront gardens: Bay South Garden, Bay East Garden, and Bay Central Garden, Bay South Garden is the largest at 54 hectares or 130 acres. Designed by Grant Associates as masterplanners of the multi award-winning Bay South Garden, the masterplan’s overall concept draws inspiration from an orchid, the Vanda ‘Miss Joaquim’ (Papilionanthe Miss Joaquim), which is the national flower of Singapore. The orchid takes root at the waterfront (conservatories), while the leaves (landforms), shoots (paths, roads and linkways) and secondary roots (water, energy and communication lines) then form an integrated network with blooms (theme gardens and Supertrees) at key intersections.

Underlying the concept of Gardens by the Bay are the principles of environmental sustainability. Much effort was made to plan and design for sustainable cycles in energy and water throughout Bay South Garden. Gardens by the Bay broke ground in November 2007 and was opened to the public in June, 2012.

Highlights of Bay South Garden include 18 Supertrees of different sizes ranging from 25-50 metre (82 to 164 feet) vertical gardens that light up at night; two giant Cooled Conservatories (designed by Wilkinson Eyre Architects), housing Mediterranean and Tropical climate plants; and a rich variety of Horticultural Gardens, designed around the themes ‘Plants and People’ and ‘Plants and Planet.’

Grant Associates was inspired for the design of the Supertrees by both nature and fiction: from the mighty Karri trees of southwestern Australia, a species known to grow up to 80 metres tall, as well as the magical forest in the anime film ‘Princess Mononoke’ by Japanese film studio, Studio Ghibli.

“The Supertrees are a fusion of nature, art and technology and as such, are emblematic of the Masterplan approach. They are at one level spectacular vertical gardens and landmark features, and at another they are the environmental engines for the Cooled Conservatories, incorporating devices for water harvesting and storage, air intake, cooling and exhaust, photovoltaic arrays, solar collectors.” ~ Grant Associates

At the heart of the design are the 25, 30, 37, 42, and 50m high Supertrees, all located within Bay South at Gardens by the Bay. The vertical structures provide a framework to sustain air plants, tropical flowering climbers, and ferns, provide water harvesting and spectacular light displays, and much more via intelligent environmental infrastructure.

“They are fitted with environmental technologies that mimic the ecological function of trees: photovoltaic cells that harness solar energy which can be used for some of the functions of the Supertrees (such as lighting), similar to how trees photosynthesize, and collection of rainwater for use in irrigation and fountain displays, similar to how trees absorb rainwater for growth. The Supertrees also serve air intake and exhaust functions as part of the conservatories’ cooling systems.” ~ Wikipedia

While marrying the form and function of mature trees in a garden from reclaimed land, the Supertrees provide an immediate scale and dimension to the Gardens. They also create height to balance the current and future tall developments in the Marina Bay area.

In the day the Supertrees’ large canopies provide shade and shelter. At night, the Supertrees come alive with lighting and projected media created by Lighting Planners Associates. From 7:00pm – 10:00pm the magnificent Supertrees put on the “Garden Rhapsody,” a dazzling show of coordinated lights and background music which changes approximately each month.

The Supertree Grove also contains the OCBC Skyway and the Supertree Observatory, (both with a fee required for entrance).

A 128-metre-long aerial walkway, the OCBC Skyway was designed by Grant Associates and connects the two 42-metre Supertrees in the Supertree Grove to enable visitors to take in a different view of the Gardens from a height of 22 metres.

Located at the canopy of the tallest 50-metre Supertree, the new Supertree Observatory opened in December, 2019. The 3-level Supertree Observatory offers 360 degree panoramic vistas of the lush surroundings of Gardens by the Bay and the Marina Bay skyline (closed until further notice due to Covid-19). Visitors can soak in unblocked cityscape views at the open-air rooftop deck, enjoy light refreshments and try out immersive digital learning experiences inside the observatory space. The observatory space is located one level below the rooftop deck and consists of an indoor area with full-height glass windows, as well as a peripheral outdoor walkway. Here, visitors can also experience a message about the effects of climate change creatively conveyed through digital media.

• Trunk – A steel frame attached around the reinforcement concrete core

• Canopy – Shaped like an inverted umbrella, the canopy was assembled and hoisted via a hydraulic jack system (with the exception of the 50m Supertree canopy assembled at its final height).

“To minimise the energy used to cool the two conservatories, massive heat exchangers and dehumidifiers run day and night to maintain conditions suitable for the planting. The excess heat produced by the conservatories is used and finally expelled via the Supertrees.” ~ Atelier One

• The Supertrees were planned from the outset to showcase innovative environmental technologies and to become an integral part of the overall site environmental systems. In addition to the creation of habitat and shaded spaces through the use of vertical planting, 11 have photovoltaic cells to harvest solar energy, others include rainwater harvesting and some are integrated with the Cooled Conservatories and energy centre to serve as air exhausts.

“Unknown to most visitors is a Supertree that acts as a chimney stack. It expels non-toxic fumes from a biomass boiler where plant waste from Gardens by the Bay and other parts of Singapore is burnt and converted into fuel. The burnt waste powers a steam turbine, which subsequently produces part of the energy needed to chill the two cooled conservatories, reducing energy used from external sources.” ~ BBC

• Over 226,000 plants comprising more than 200 species and varieties of bromeliads, orchids, ferns and tropical flowering climbers are planted on the 18 Supertrees.

• Examples of some of the species planted on the Supertrees include the Tillandsia stricta from Brazil, Tillandsia fasciculate from Panama, Cattleya maxima from Ecuador, and Pseudorhipsalis from Costa Rica.

• The plants are chosen based on the following considerations:

• The Supertrees have different planting schemes in various colours ranging from warm tones like reds, browns, orange and yellows, to cooler hues like silver and pink.

Approximate areas per the 5 sizes of Supertrees multiplied by each number:

Grant Associates thought is would be interesting to compare the footprint of the Supertrees to their actual vegetative cover:

The Supertrees have become highly sophisticated structures that are testing the extremes of horticulture, structure and digital technologies whilst offering distinctive visual landmarks within the gardens and neighbourhood.” ~ Grant Associates

Gardens by the Bay is the winner of numerous awards including BCA Universal Design Mark Platinum winner 2014; the Landscape Institute Awards 2013 for Climate Change Adaptation; and the  World Building of the Year 2012.

“Dedication to Universal Design extends to all the Gardens’ attractions, facilities and services. They are thoughtfully designed to cater to the diverse needs of users of all ages and abilities. The uniquely designed accessible elevated walkways at the Supertree Gro[o]ve, Flower Dome and Cloud Forest allow unobstructed movement for wheelchair users and mothers with prams.” ~ Building and Construction Authority (BCA) of Singapore