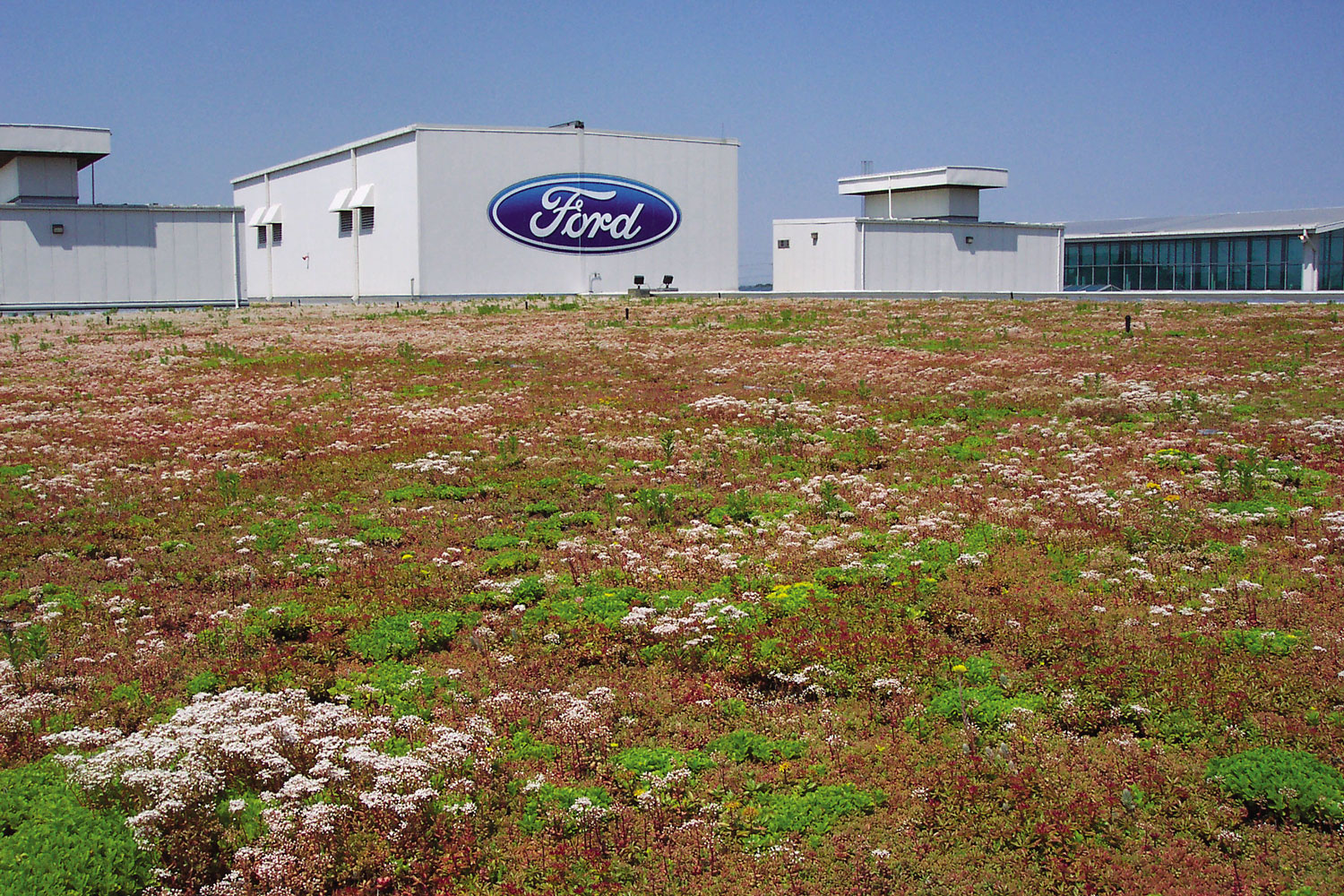 William McDonough + Partners where you can see additional photos and many news articles, plus their Ford Rouge Center Landscape Master Plan;  Walbridge.

Watch the 2:34 Ford Motor Company’s River Rouge Truck Plant – Project of the Week 3/07/16 video from Greenroofs.com on the greenroofsTV channel on YouTube. Greenroofs.com Project of the Week video photo credits: All Courtesy of Ford Motor Company and Xero Flor America except for the illustration from William McDonough + Partners (rendering by Richard Rochon).

In 2000, the 600-acre, $2 billion Ford Rouge Center near Dearborn, Michigan, underwent major redevelopment, laying the groundwork for sustainable manufacturing at one of the world’s largest and oldest industrial icons. With William McDonough + Partners as design architects, numerous pilots of advanced environmental concepts were constructed and a new assembly plant with the nation’s largest ecologically inspired living roof was planted on the massive industrial building.

About 454,000 square feet of assembly plant roofing is covered with sedum and other succulent plants. The roof reduces stormwater runoff by holding an inch of rainfall. Also, the living plants absorb carbon dioxide as part of photosynthesis, so oxygen is emitted and greenhouse gases are reduced. In 2004, the 10.4 acre Ford Truck Plant green roof was recognized in the Guinness Book of World Records as the world’s largest living roof and helped jump-start the early North American green roof industry.

Redevelopment of the 1917 complex formed the foundation for the company’s vision of balancing lean manufacturing with environmental sensitivity.

“This is not environmental philanthropy; it is sound business, which for the first time, balances the business needs of auto manufacturing with ecological and social concerns in the redesign of a brownfield site,” said Ford Chairman Bill Ford in 2000, whose great-grandfather Henry Ford constructed the complex. “This is what I think sustainability is about, and this new facility lays the groundwork for a model of 21st century sustainable manufacturing at the Rouge. While most companies would rather move than invest in a 83-year-old site, we view this as an important reinvestment in our employees, our hometown and an American icon of the 20th century,” Ford Motor Company Press Release, 2000.

Above is a photo from the 1930’s of what the plant used to look like, compared to the plant in July, 2004. The River Rouge Plant, also known as Ford Dearborn Truck Assembly Plant, won the 2004 Green Roofs for Healthy Cities Award of Excellence in the Extensive Industrial Commercial category.

The Xero Flor Green Roof System, originally engineered in Germany, is a pre-vegetated mat system and was chosen for its thin and light properties. They were installed with just 1.25 inches of growing medium integrated into the mats, and weigh less than ten pounds per square foot when fully saturated. The mats were pre-cultivated on the ground and went up on the roof with full-grown, mature plants and 90 percent-plus plant coverage for an instant green roof. In 2009-2010 a group of researchers from Michigan State University, including Dr. Brad Rowe, and several Xero Flor America representatives conducted a species survey and vegetated density analysis of the Ford Green Roof.

“The original Xero Flor mats retain a very healthy appearance with a dynamic mix of plant varieties. The most recent plant coverage study, conducted in 2010, found that 13 of the 15 original species were thriving with 93 percent to 98 percent coverage of hearty vegetation thriving across the roof.” ~ Roger Gaudette, director of asset management for Ford Land Corporation and a member of the original project team (Greenroofs.com, 2013).

Aside from the huge greenroof, other environmental initiatives include:

Swales, or shallow green vegetated ditches seeded with indigenous plants – a pilot involving swales and retention ponds will be used to regulate water flow and evaporation and improve stormwater management on the site; Phytoremediation which uses natural plants to rid soil of contaminants; Porous paving, a surface that filters water through retention beds with 2-3 feet of compacted stones, is another pilot project that helps manage stormwater runoff; Greenscreens, trellises for flowering vines and other plants, shade and help cool the Rouge Office Building; Renewable energy sources: the use of solar cells and fuel cells will be included in the project. For example, fuel cells will provide power for some computer systems in the new plant. The company also is evaluating the possibility of GeoExchange and wind power demonstration projects; Planting of more than 1,500 trees and thousands of other plantings to attract songbirds and create habitats.

In late June 2004, a company photographer was up on the roof and spied a mother killdeer and her eggs – a sure sign that one of the World’s Largest Greenroofs is doing one of its jobs, providing habitat for local wildlife originally lost to the footprint of the building. Ford reported that this was the third nest found within the the last two years since the 454,000 sf extensive greenroof had been up. In addition to serving as a habitat for nesting birds, the green roof provides insulation for the truck plant. According to Ford, it keeps the roof “an estimated 10 degrees warmer in winter and 10 degrees cooler in summer, reducing energy costs significantly,” (Ford Living Roof and Benefits page).

Michigan State University (with Dr. Clayton Rugh among others) partnered with Ford on this project — believed to be the first such experiment on this scale with the challenging soil conditions on the site. It was thought that if the pilot were successful, it would be used elsewhere on the site and potentially could become an ecologically friendly alternative to hauling contaminated soil to landfills in the future. A portion of the original Dearborn Glass Plant was saved to preserve its legendary design by Detroit architect Albert Kahn. The project depended upon completion of negotiations for local, county and state incentives (Don Russell, personal communications, March 2001).

The Ford Motor Company’s River Rouge Plant is open for tours. Visitors have the opportunity to see the living roof from an 80-foot observation deck atop the LEED® Gold Certified Visitor Center.